Welcome back to the Big Law Business column on the changing legal marketplace written by me, Roy Strom. This week, we look at just how far the bankruptcy business has tumbled since a banner 2020. Sign up to receive this column in your inbox most Thursday mornings.

This year I almost forgot the concept existed. I haven’t seen “bankruptcy” in a headline for too long. The booming practice has run cold.

The reversal of fortune is about as stark as you could imagine. Law firms representing the largest public companies to file bankruptcy last year through September earned $335 million in fees for the work they did in the lead-up to those filings. The same number this year is about one-tenth of that: $37 million. 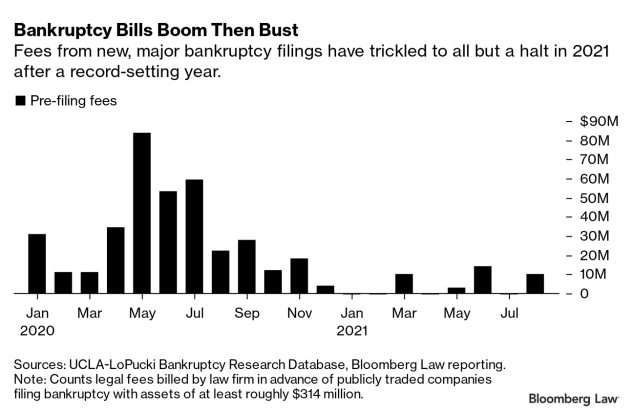 There really is no escaping such a big drop-off. The most prominent bankruptcy firms have suffered similar fates.

The Kirkland & Ellis bankruptcy group set records in 2020. They advised on 23 of the 57 major cases (defined by a UCLA School of Law database as a publicly traded company with assets more than $314 million). That was the highest annual market share for a law firm in the database of such bankruptcies going back to the 1980s. Kirkland earned more than $200 million in pre-filing fees for that work.

This year? The bankruptcy behemoth has represented two such major bankrupt companies, earning $20 million so far. 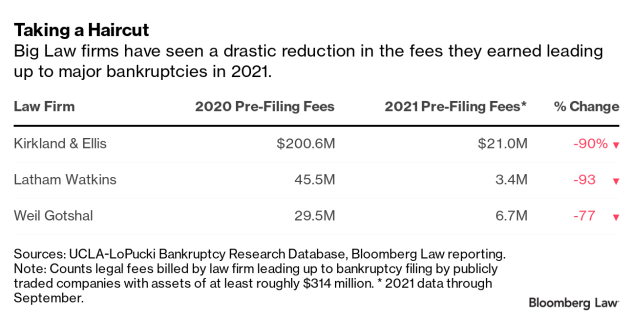 Bankruptcy was the lone practice group to experience growth in demand in 2020 compared to 2019, when billable hours rose 3.2%, according to Thomson Reuters.

It is admittedly hard to justify bemoaning the demise of bankruptcy work in the current environment.

For one thing, it’s a sign that the monetary and fiscal policies crafted to evade a prolonged recession have worked. For another, Big Law firms are doing just fine. Demand for M&A—a far more important driver of Big Law profits—is at a post-Great Recession high.

Examining the bankruptcy activity is worthwhile if even for a simple reason: The business environment won’t stay the same forever. How firms treat their bankruptcy lawyers when the tide goes out says a lot about their willingness to invest in the future and their commitment to a “partnership.” And it could foreshadow how they respond to a looming threat: An oversupply of corporate lawyers.

Kirkland’s Edward Sassower, a New York partner and member of the firm’s executive committee, said in a statement the firm will “fully invest in our restructuring practice regardless of where we are in the cycle.”

“We add 30 to 50 first years to the practice every year without fail and continue to grow the partnership so that we are always ready to meet our clients’ needs,” Sassower said.

Across the market, firms aren’t all that interested in hedging their position at the moment. They are hiring far fewer bankruptcy lawyers.

Over the past 12 months, there were 412 moves by bankruptcy attorneys in the AmLaw 200, according to Firm Prospects, which tracks law firm rosters. That represents a 20% decrease from the same period a year before. The slowdown is even more dramatic when you consider it comes at a time when Firm Prospects data show there was a 31% increase in overall moves.

Interest rates will inevitably rise, likely cooling the red hot capital markets work that has buoyed law firms since mid-2020. And if liquidity greases the wheels of law firms’ corporate practices, you’d expect things like M&A to stall as well. Those practices won’t see the “bust” bankruptcy is experiencing now—public policy decisions usually aren’t designed to cripple capital markets the way they’re made to avert a domino of bankruptcies.

While it’s hard to know when the shortage economy will end, law firms likely will at some point find themselves with a surplus of lawyers in the practice groups that are booming now. We’ve heard so much about the hiring in Big Law corporate departments this year.

If a dearth of lawyers gives way to an abundance, the potential responses by management are relatively limited. Prices would likely come under pressure. But there’s little evidence to suggest law firms are comfortable with anything other than raising rates.

So, the question managing partners would likely face is what to do with all the newly hired lawyers? You know, the ones working out of home offices in cities we’ve never cared about before?

It’s probably similar to the questions they’re asking themselves today about bankruptcy practitioners.

On Halloween Parties: Philippe Weiss, an attorney and president of Seyfarth at Work, asks the question on everyone’s mind: Will that Halloween costume offend co-workers? My advice after reading his answers: Don’t attend the office Halloween party. (Which, he notes, better be voluntary!)