Wachtell Lipton Rosen & Katz, a consistent leader among law firms handling M&A deals, has been dethroned by Simpson Thacher & Bartlett for the top spot in global transactions work for the first time this year.

Global mergers and acquisitions activity reached $3.8 trillion by the end of September, building on a potentially record-breaking year propelled by continued investor confidence and private equity deals. Twenty law firms have worked on more than $2.7 trillion worth of deals so far, according to Bloomberg’s M&A advisory league tables.

Law firm leaders and M&A partners said low interest rates, cash aggregated over the course of the pandemic, and concerns over heightened antitrust regulation next year are spurring the surge.

Simpson Thacher has advised companies on nearly $342 billion worth of deals globally over 169 transactions this year, officially overtaking perennial top dealmaker Wachtell, which worked on 84 deals worth $330 billion.

“It’s great news, but not a shock,” said Eric Swedenburg, co-head of Simpson Thacher’s M&A group and executive committee member, of the firm’s placement in the league tables. “Pick a sector, pick a type of transaction, and we’ve been busy in it for months on end at this point. We’ve got a great client base and we happen to be in a spot right now where all our clients are doing a lot of things in the M&A sphere.”

Latham & Watkins, Kirkland & Ellis, and Sullivan & Cromwell rounded out the top five M&A dealmakers for the first three quarters of the year. 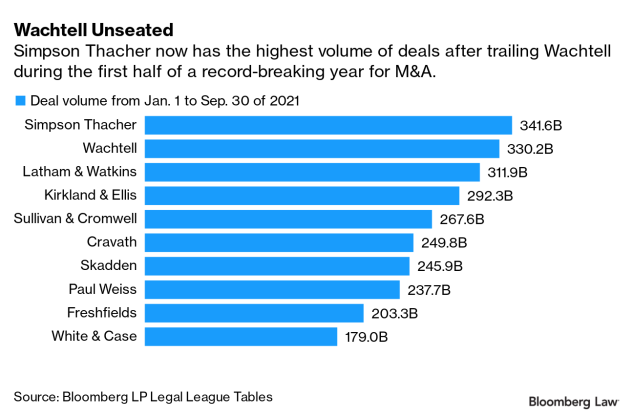 Since 2016, Wachtell has had the highest global deal volume among law firms all but two years. Skadden Arps Slate Meagher & Flom took the top spot in 2017, and Latham & Watkins led the pack in 2020.

“We don’t look at life quarter to quarter,” said Daniel Neff, a Wachtell partner and co-chairman of the firm’s executive committee. “What we are very attuned to is year-over-year market share. This year has skewed generally towards smaller deals for us than prior years, but even with that, our average deal size is larger than others.”

This year’s historically high volume of M&A has come despite a slowdown of megadeals, or transactions valued at more than $50 billion.

“The record aggregate deal value is really being driven by the number of deals getting done as opposed to the magnitude of a handful of very large megadeals, and that’s being driven in significant part by the extremely high levels of activity of private equity sponsors,” said Kirkland & Ellis corporate partner and executive committee member Eric Schiele. His firm has done 658 deals valued at $292 billion this year.

Private equity deals have skyrocketed, totaling $1.2 trillion in deals announced, pending, or completed in 2021. Transactions involving a private equity partner comprise 40% of global deals this year, a steady increase from 29% in 2019 and 34% in 2020.

That helped boost Simpson Thacher to the top of the league tables. Swedenburg and M&A co-chair Katie Sudol estimated that about two-thirds of Simpson Thacher’s M&A work involved private equity. 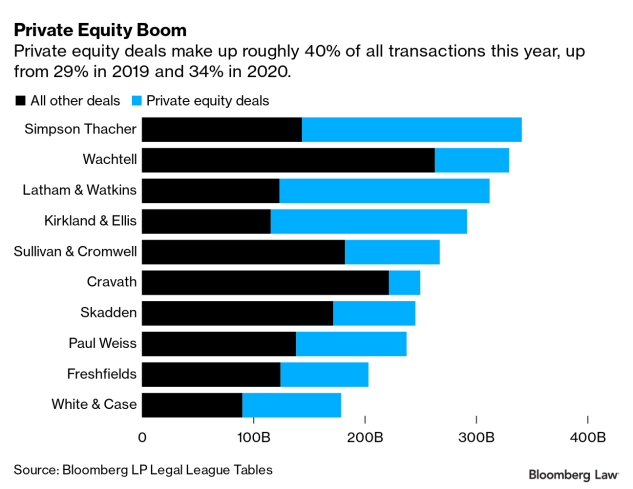 “We all thought there could be a slight end-of-summer dip in activity levels, and I think certainly many people at the firm were hoping for a little bit of a break,” Sudol said, “but we really continued to see surges in activity. Private equity really continued to just charge forward and move forward on deals throughout these times.”

Simpson Thacher worked on nearly $53 billion worth of private equity deals in the third quarter, according to Bloomberg data, bringing its total private equity work to $197 billion for the year.

Schiele said the private equity boom is due, in part, to record levels of fundraising by private equity sponsors over the course of 2020 as the pandemic fueled fears of another 2008-style financial crisis.

“Everything has just come together in a nice, neat fashion for a little while. Money’s still pretty cheap in terms of Fed policy and that’s probably one of the biggest drivers on things. There’s money to spend, whether it’s on the balance sheets of corporates or if it’s private equity in terms of the funds that they have raised,” Swedenburg said.

What goes up must come down, and so it goes for the M&A market. Maybe.

“The principle of regression towards the mean would suggest that there needs to be a slowdown at some point in the not-too-distant future,” Swedenburg said, “but I’m not seeing it.”

Despite worries around tightening antitrust regulations and tax increases under the Biden administration, M&A partners at multiple major deal making firms said they expect a continued frenzy of M&A activity well into 2022.

“One concern that we have is that antitrust scrutiny increases significantly and deals that would otherwise happen, don’t happen,” said Frank Aquila, global head of M&A for Sullivan & Cromwell and management committee member, which did 110 deals worth $268 billion. “Having said that, we’re not seeing any dramatic change in the number of transactions that are subjected to intense review by the U.S. government at this point.”

“Nobody really knows if there will be a capital gains rate change but also when it will be effective. I’m sure in a few cases it’s affecting behavior, but it’s probably only around the margins,” Marell said. Paul Weiss came in eighth this quarter in global deals with 165 transactions worth $238 billion.

Freshfields (ranked ninth at 211 deals worth $203 billion) corporate and M&A partner Andrea Merediz Basham also predicts continued activity, based on her conversations with clients and amount of private equity funds and acquisition-hungry SPACs still on the market. “I would be hard pressed to say that there’s some cliff we’re going to go off of it simply by virtue of regulation increasing or interest rates going up,” she said.

Swedenburg said he thinks there’s a good chance that Simpson Thacher will continue to lead the M&A charts next quarter.

“It’s hard to be overly confident about size of deals and quantity of deals and things along those lines, but I don’t I don’t see any reason to think that what’s gone on for the last 12 months is going to be slowing down over the balance of 2021,” he said. “What I’m confident in is that we will continue to be very busy for the balance of the year.”