Many types of transactions—from company buyouts to VC investments—are hitting record highs this year. Add spinoffs to the list.

Year to date, 205 spinoff transactions—i.e., deals involving the creation of independent companies through either the sale or distribution of new shares of an existing business or the division of a parent company—have been announced and are currently pending or completed. This deal count is the highest since 2011 (227 deals). Despite the intensive work required to complete a spinoff, it seems likely that we will see even more in the remainder of the year. And spun-off companies resulting from these transactions may themselves end up being involved in subsequent M&A deals. 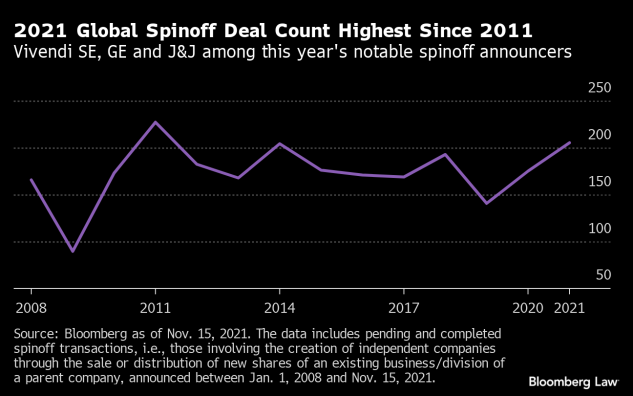 The companies that have announced spinoffs this year have included big names like Vivendi SE, Dell Technologies Inc., Prudential Plc, Daimler AG, Meredith Corp., and L Brands Inc. Just last week, General Electric Co. and Johnson & Johnson both announced spinoffs. Pressure from shareholder activists has played a role in some of these decisions to carve up conglomerates. Shareholders valuing operational focus over breadth has been a reported trend driving breakups. There is also the possibility that environmental, social and governance (ESG) issues may prompt some future breakups.

However, “focus may not really be back in fashion,” notes a Nov. 13 news report from Bloomberg News, citing New York University Professor Baruch Lev, who earlier this year conducted a study of “conglomerate transactions.” Professor Lev’s conclusion is that conglomerates have a new identity: “They’re now the fashionable, high-growth tech and media companies venturing far out of their core business to acquire unrelated enterprises.”

So, yes, in the bustling deals ecosystem, spinoffs are a trend—and yes, M&A deals to spur inorganic growth (the opposite of spinoffs) are also a trend.

For in-house and transactional lawyers, spinoffs are challenging transactions. While companies undertaking spinoffs often engage outside counsel and encounter complex corporate and tax considerations, these deals also present in-house legal departments with unique challenges in preparing for and effectuating a separation. In fact, the organizational work done to complete a spinoff mirrors the work of post-closing integration of merged entities; the parties need to disentangle (rather than combine) customers, accounts, contracts (including government contracts), employees, management, services, and a host of other administrative and operational matters. The 90 spinoffs announced this year that remain pending—which include the GE and J&J planned spinoffs—will require a great deal of coordination and work on the part of in-house counsel.