The Bloomberg Law 2022 series previews the themes and topics that our legal analysts will be watching closely in 2022. Our analysts explore the forces shaping the transactional landscape and key markets of interest, from overriding trends in M&A and IPOs to the nuanced impacts of new privacy and data security laws on contract language.

Private equity dealmaking is “smashing records” in 2021. And venture capital investments are surging. What comes next? Even more work for deal lawyers, both in the near and long term. Private equity firms continue to boast increasingly high levels of unspent capital. In addition, we are seeing an abundance of newly launched funds. These trends, taken together, will further propel the private equity cycle and bring more waves of deals in 2022 and beyond.

Global private equity parties have been involved in $1.7 trillion in M&A, including investments, on both the buy and sell sides in 2021 thus far. This volume is already the highest annually for any year on record. More than half of this year’s volume so far is comprised of deals involving PE acquirers, which in turn includes over $500 billion in venture capital investments and over $350 billion in company buyouts. 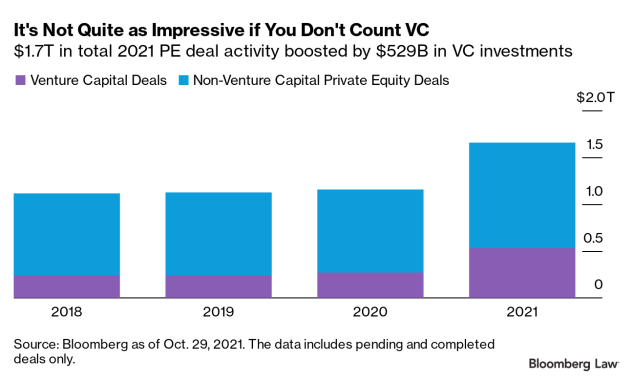 The 2021 volume of venture capital investments is also an all time high—and it’s already 92% higher than 2020’s full-year total. Without this nearly doubled VC volume, overall PE deal volume wouldn’t have been quite as impressive this year.

The same goes for private equity buyouts. This year’s buyout volume already towers over recent years’ volumes, and is the highest since the heyday in 2006 and 2007. 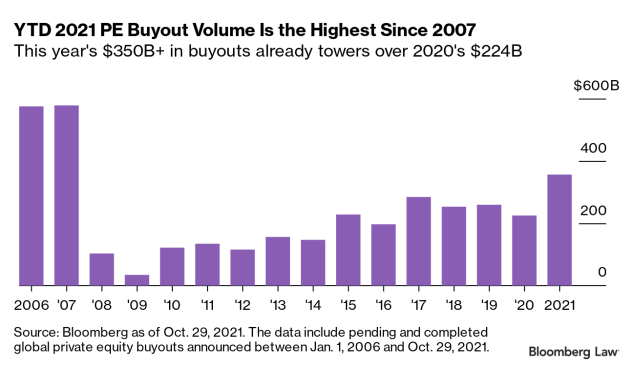 There’s enough money for this boom to keep going. In September, Bloomberg News reported that by the mid-year mark, the private equity sector had already “amassed a record $3.3 trillion of unspent capital, including $1 trillion held by buyout funds, giving it significant fire power for fresh acquisitions.” This dry powder includes over half a trillion dollars in capital raised just in first-half 2021, according to the news report.

Of course, just because PE has the capital does not mean it will necessarily keep the remarkable 2021 boom-tempo up. Some have predicted that exhaustion from the sheer speed and volume of deals will lead to a slowdown. But based on recent years’ volumes, even if things do slow down, it’s hard to imagine a scenario in which PE deal activity would be low any time soon.

One reason is fund terms. Once capital is raised, funds typically have some number of years, often five to seven, in which to find targets and make investments. Considering that annual totals of new capital raised have neared the trillion-dollar mark every year since at least 2017, and that these amounts have far exceeded PE’s actual annual deal volume, it follows that we will most likely continue to see much of that dry powder—the trillions in capital that PE raised in recent years and this year—be deployed next year and in years to come.

What’s more, the store of dry powder is only poised to grow. New private equity funds, collectively seeking to raise a total of over $500 billion in capital, have been launched this year. 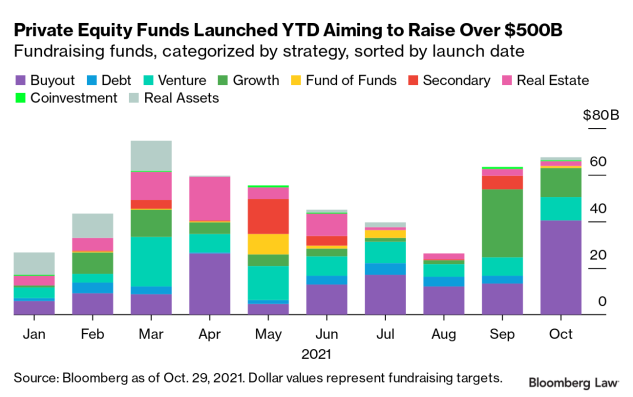 Among these funds launched in 2021, buyout funds are aiming to raise a total of over $150 billion, topping all other strategies in terms of aggregate fundraising targets. Venture-focused funds, which are targeting nearly $100 billion, are in second place.

In the world of PE and VC, an entry is followed by an exit, so all of the PE-acquirer deals seen during this boom—which total somewhere near a trillion dollars in volume—can also be counted as certain future exit deals. For buyouts, holding periods are reportedly shorter than they were in past years and are averaging at around three to four years. Assuming this average duration, deal lawyers who have worked on this boom’s buyouts and VC fundings might be handling the exits for the very same targets as early as 2024. And if they don’t, some other lawyers will.

In the near term, there’s also the practical matter of getting the currently pending deals closed. Of 2021’s striking total of $1.7 billion in PE deal volume, $539 billion—the total value of 1,561 deals—remains pending. $293.6 billion of this pending volume is for deals involving North American targets, $153.3 billion involves European targets, and $83.9 billion involves targets in Asia-Pacific. Taken together, that will be quite a bit of work on the part of deal lawyers to effectuate deal closings across the globe.