Members and supporters of the American Federation of Government Employees hold a demonstration in the Hart Senate Office Building in February 2020.
Photographer: Sarah Silbiger/Getty Images

A flip of the script in an outlier of a year has resulted in a U.S. labor market with more unionized workers in government jobs (7.17 million) than in private-sector jobs (7.08 million).

The Bureau of Labor Statistics just released annual union membership figures for 2020, and there’s not a lot for trend-spotters to latch onto beyond the obvious that the labor market went almost completely pear-shaped. Unions lost 321,000 workers to hit an all-time low membership total (14.3 million), yet at the same time managed to gain market share for the first time since 2008 to reach the highest union density mark in five years (10.8% of all employees).

Acute results like those are easy to explain—nonunion employment in 2020 plunged even farther than union employment did—but they are difficult to put into long-term context. Some patterns do emerge, though, and one shows a sharp reversal in the fortunes of labor unions in the public and private sectors.

Public-sector predominance has happened only once before: in post-Great Recession 2009–2012. Before that, government unions had always been outnumbered (more than 2-to-1 until 1985) by private-sector membership. A long stagnation of private-sector unions and a sudden membership drop when companies shed jobs and closed plants after the 2008 financial collapse gave slow-and-steady public-sector union membership the lead. 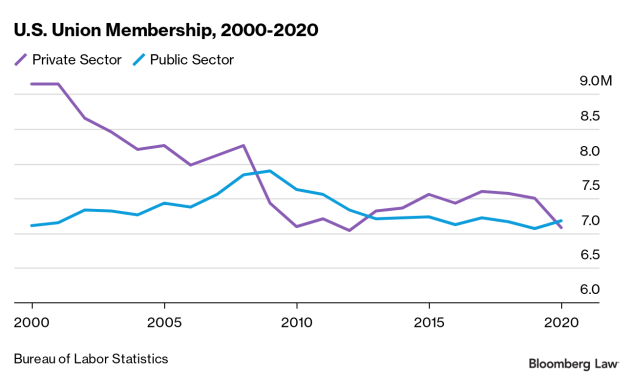 This may be a temporary switch. After all, economic recovery and labor’s expansion into more service industries boosted private-sector unions in 2013.

But if these changes instead take root, then 2020 in retrospect will turn out to have been a major reboot of the state of labor relations.