The pandemic-related lockdown has affected all market participants, including activist investors. According to data from the Bloomberg Terminal, two relatively new players, Bulldog Investors LLC and Bluebell Capital Partners LP, have joined perennial leader Elliott Management Corp. at the top of the list of activists by the number of campaigns conducted. Bulldog has conducted 15 campaigns as of May 1, followed by Elliott with six. Newcomer Bluebell joins four others with three campaigns during this period. 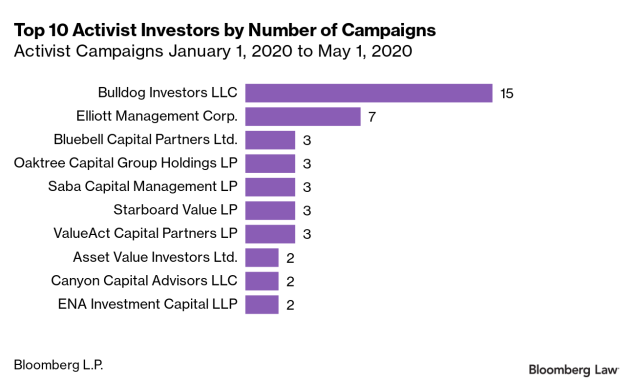 Unlike many activists who target operating companies, Bulldog Investors LLC generally takes positions in under-performing closed-end funds. Closed-end funds are pooled investment vehicles that raise capital through an initial public offering. The fund will list shares on an exchange. Unlike open-end funds, such as mutual funds, which can issue and redeem shares daily based on the fund’s net asset value (NAV), the number of shares in closed-end funds is fixed. Investors will trade shares with other investors, rather than with the fund. Most closed-end funds will make capital gains distributions to investors annually.

According to Bulldog, the firm focuses on identifying undervalued assets and buying them at a discount, and then working to close that discount. There is a transparency in closed-end fund investing, as each fund’s NAV and its trading price are publicly available. If a fund trades above its NAV, it is said to be trading at a premium. If its share price is below its NAV, the shares are trading at a discount. Many factors can influence premium or discount pricing, including market volatility, the reputation of the fund managers, the market’s view of the fund’s trading strategies, and any changes to the capital gains distribution policies.

In May, The Bulldog-Ancora Group, an entity formed by Bulldog Investors and Ancora Advisors LLC, announced a tender offer to acquire up to $70 million worth of shares of Adams Natural Resources Fund Inc.