The impact of the coronavirus pandemic on activist investment funds is not yet clear. The crisis would appear to present a significant opportunity for activists to take larger stakes in more companies. Stock prices declined dramatically in a few short weeks in early 2020, and companies have been focused on survival rather than dealing with activist campaigns. So far, however, there has been no significant uptick in the number of activist campaigns during the economic downturn. While activists are likely to return to the playing field after the worst of the pandemic passes, with regard to new campaigns, most (but not all) are currently standing on the sidelines. 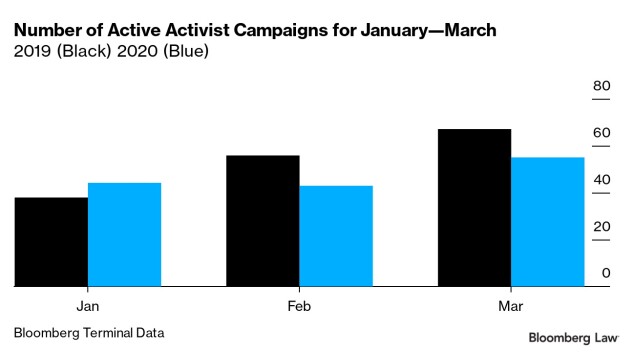 Ongoing activist campaigns for Feb.—Mar. 2020 lagged behind the same period in 2019.

There are several reasons why many activist funds have been relatively inactive during the outbreak. Initially, coronavirus-related shutdowns present logistical challenges, such as scattered staff, for activist funds as well as issuers in terms of coordinating campaigns. Activists also have concerns about creating image problems and losing institutional investor support if they wage aggressive campaigns while so many companies are struggling to survive.

Activists are also reluctant to take significant stakes in companies during a period of market turmoil. The Dow Jones Industrial Average has lost nearly 20% of its value in recent weeks. Markets also face the potential for uncertainty and volatility as the economy takes halting steps to reopen while coronavirus risks remain. The presidential and congressional elections in November are another question mark for market recovery prospects.

Finally, activist funds have struggled to perform during the economic downturn, much as operating companies have. As reported by Bloomberg, hedge funds in general suffered significant losses in March, with some funds declining in value by as much as 40%. According to the Bloomberg report, three out of four hedge funds lost money during the month.

Most activists are waiting out the pandemic, but Starboard Value LP and its principal Jeff Smith are not waiting idly by. As reported by Bloomberg, Starboard is engaged in its second proxy fight since the virus outbreak. The fund is seeking a majority of eight seats on the board of GCP Applied Technologies Inc.According to its Schedule 13D filing, in Starboard’s view, the chemical company “has significantly underperformed since the Company’s debut as a public company.”

Starboard recognized the impact of the coronavirus epidemic, stating that the “crisis has created a difficult environment for many companies and their respective employees, customers, and partners,” including GCP. Starboard added that its campaign was appropriate because “it is time for a fresh start for GCP,” and the company “needs strong leadership and oversight during these challenging times.” The company responded by calling the campaign “out of touch with the realities of the current operating environment and global crisis, as well as the best interests of shareholders and our other stakeholders.”

Despite the temporary lull, activists will return and companies should be prepared. Companies should not relax during the respite, and should anticipate significant activity as the economy reopens. Companies saw a record number of proxy campaigns in the wake of the 2007-2008 recession, and it is likely that current activists will respond in a similar fashion when the pandemic recedes.

As a first step, even during the crisis, companies should familiarize themselves with the activists operating in their industry. They should review recent activist campaigns involving peer companies, and be familiar with the activists’ tactics, demands, and results. Companies should monitor news sources and regulatory filings, and should track changes in hedge fund and institutional shareholder holdings.

It is a cliché, but companies should also “think like an activist.” The company must see itself as activists do when they size up a potential target, and should conduct a critical review of their own vulnerabilities. Particular red flags for activists include:

After evaluating their risk profile, companies should review their level of preparedness. A growing economy and a bull market for stocks can paper over some governance and leadership weaknesses, but inadequate company responses to the coronavirus-fueled downturn will highlight these problems.

Investor relations are also a key. The company should maintain close contact with major investors at the senior executive level and should be aware of shareholder concerns, particularly during crisis periods.

It is also crucial for the company to establish a response team in advance. A checklist for assembling the team may be found here. The response team will formulate the “playbook” for the company’s initial response to an activist campaign. Key documents may also be sketched out in advance. These include press releases and white papers setting forth the company’s shareholder value case and discussing reasons for performances falling short of expected benchmarks.

Companies must carefully consider and control their response to and communications concerning an activist after the investor makes initial contact. The company is under no obligation to meet with the activist, but hostility and stonewalling may not be productive. Companies should be receptive to meeting with activists and considering their recommendations.

A final part of the response, particularly in the midst of the current challenging circumstances, is for management to remain focused on the company’s daily operations. Activist campaigns can distract the attention of management away from their first obligation of running the company and producing positive results at a time when its attention is already focused elsewhere.