Adversary proceeding caseloads are closely mirroring those same patterns, based on statistics produced by the United States Courts. This was the first year that S.D. Tex. outpaced Delaware and all other bankruptcy courts for adversary proceedings filed, further establishing it as a preeminent bankruptcy destination. 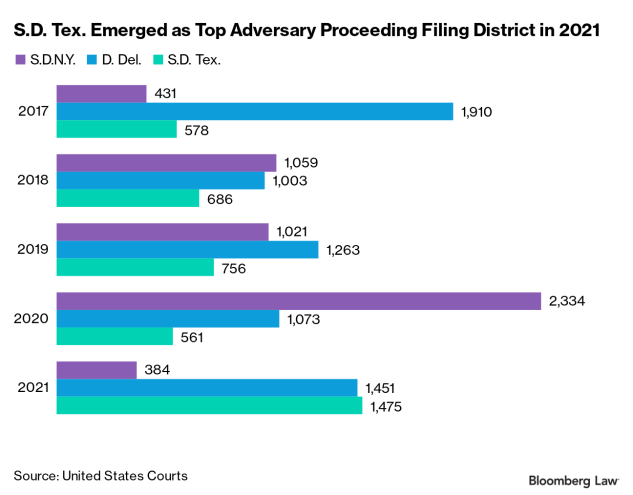 Adversary proceeding filing data in the top three megacase jurisdictions reflect overall trends in Chapter 11 cases (although it should be noted that this data covers adversary proceedings associated with cases under any filing chapter). In 2021, S.D. Tex. had the highest number of adversary proceedings filed (1,475), slightly beating Delaware (1,451) for first place. S.D.N.Y. fell to a distant third place among the megacase magnet courts in 2021, with 384 cases.

Due to the overall drop in Chapter 11 cases, we will likely see a corresponding drop in totals for adversary proceeding filings in 2022, with S.D. Tex. maintaining its position at the top.

(Updated the fourth paragraph to clarify that S.D.N.Y.'s total was third among the three megacase courts, not third among all U.S. federal district courts; and added a fifth paragraph to identify the courts that had higher totals than S.D.N.Y.)