The Bloomberg Law 2023 series previews the themes and topics that our legal analysts will be watching closely in 2023. Our Transactional analyses explore the trends and forces shaping key markets of interest in the year ahead.

As we approach 2023, the mergers and acquisitions market continues to be described as “slow” and “uncertain,” and those trends are likely to continue into the new year.

Despite this outlook, the 2023 deal forecast may not be as dreary as some predict. M&A activity in 2021 reached historic levels, and it’s hard to beat records year after year. So 2023—even if slower than 2022—could represent a return to normal in the M&A market.

Market Comes Down From Historic 2021

M&A deal volume—covering a wide variety of transaction types including minority stake transactions, private equity deals, and venture capital financing rounds—visibly slowed in 2022, and the numbers for Q3 paint a discouraging picture heading into Q4 and 2023. Q3 2022 had the third-lowest global M&A deal volume ($722 billion) since 2017. Only Q1 and Q2 2020 had lower deal volumes—$704 billion and $444 billion, respectively. 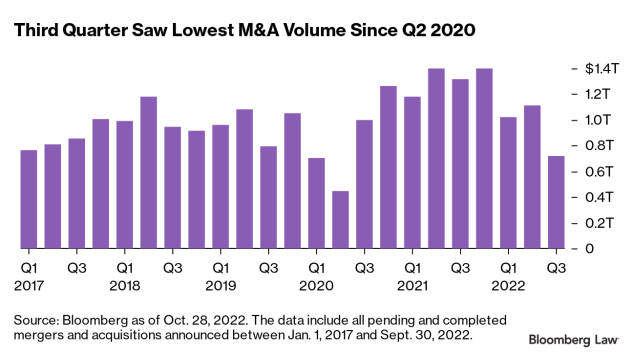 Annual global M&A deal volume data, on the other hand, suggest that 2022’s numbers are more comparable to the annual M&A deal volumes from 2017 and 2020, even with the noticeable drop in activity from last year. 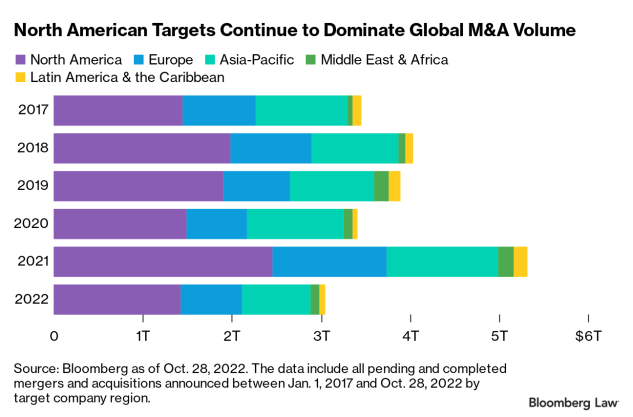 The Middle East and Africa region stands out among the other regions because its 2022 deal count is already the second highest since 2017 (only 2021’s count was higher), and its current deal count is the closest to its 2021 number. And while other regions are more than 20% behind their recent average annual deal volumes, the Middle East and Africa region is currently just 6% below its 2017-2020 average annual deal volume.

Even as deals for North American targets likely continue to be the lion’s share of deal volumes, the Middle East and Africa region could see increased activity in 2023 compared to the region’s prior annual volumes.

Despite a steep drop in deal volume from Q2 to Q3, software remained the No. 1 industry in the M&A world for the 10th-consecutive quarter in Q3 2022. M&A deals involving targets in the software industry reached their highest deal volume in Q2 2022 ($178 billion) before dropping 49% to $91.4 billion in Q3 2022. And with the tech industry facing strong winds—hiring freezes, layoffs, geographic, and political factors—software could fall out of the top spot in 2023, marking a big change in the overall M&A market.

All top target industries—software, real estate, REITS, commercial services, and internet—experienced notable drops in deal volume from Q2 to Q3. But, the aggregate year-to-date deal volume for these industries has already surpassed their aggregate annual deal volumes from 2017 to 2020. 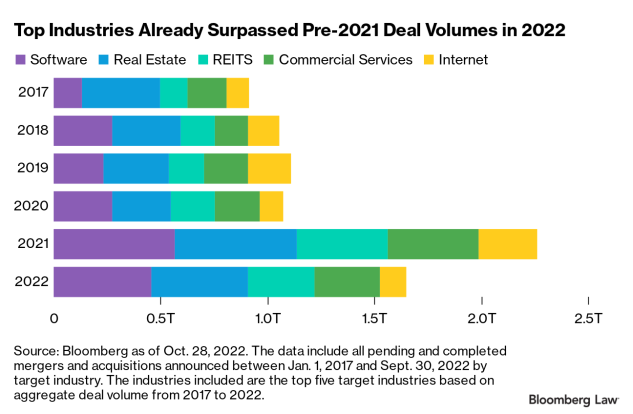 Though this year’s aggregate M&A performance by the top five industries is second only to 2021’s, 2023 may see a different top target industry and continued lower deal volumes.

There’s an ongoing debate as to whether the US can avoid a recession or is still heading towards one, and there continues to be a great deal of stock market fluctuation. There are looming storm clouds, including increases in distressed debt and “zombie bonds,” and an unclear policy direction from the Federal Reserve as it addresses inflation.

But there are market players who have more optimistic outlooks for M&A. Some investment bankers are predicting that M&A activity will increase next year, and some private equity advisers predict there will be an upsurge in transactions in 2023.

Next year’s M&A forecast also varies depending on the industry sector or region. For example, some members of the fintech industry predict that there will be more mergers and mega deals despite the recent drops in fintech valuations, and other investment bankers believe the energy sector has and will continue to be on the rise. Still, others are preparing for further downturns.

All told, outlooks for 2023’s M&A activity differ broadly, but it seems possible that next year’s deal activity will be similar to the average M&A activity prior to 2021.