The Bureau of Labor Statistics’ monthly employment figures for workers in legal occupations show an employment picture in October that’s very similar to September’s: sustained yet modest job growth and a continued low unemployment rate. But within this occupational group, October’s results also reveal a divergence between men’s and women’s unemployment rates for the first time this year. 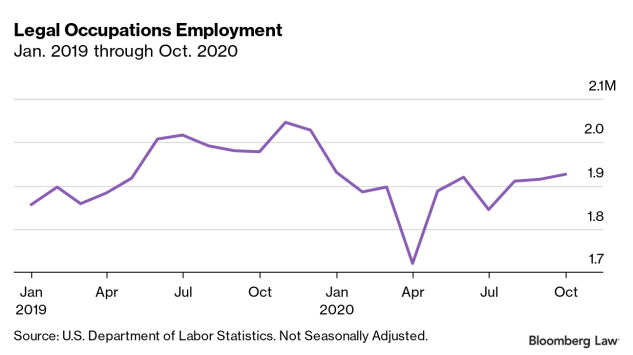 Last month, 1.926 million Americans were employed in legal occupations, representing a slight increase from 1.914 million in September and 1.91 million in August. Despite the diminutive gains, this is the first time since the pandemic and recession began that legal occupations experienced job growth in three consecutive months.

On the unemployment side, about 40,000 individuals in the legal services category said they were unemployed in October. Although that total is 1,000 higher than September’s, the uptick was not large enough to change the jobless rate of 2.0%, which remains the lowest since February.

Perhaps the most interesting data about legal workers that we’ve found in the BLS report relates to occupation by gender. Compared with September, when women’s and men’s employment totals were separated by merely 20,000, women gained legal jobs in October (up to 1.026 million), while men lost them (down to some 900,000).

The same is true for the unemployment figures: For the first time since last December, the monthly jobless rate for women and men went in opposite directions, with the women’s rate falling to 1.5% and the men’s rate climbing to 2.7%. Despite the challenges that this year has brought, the unemployment rate for women was actually lower in October 2020 than in October 2019, while it was higher for men. 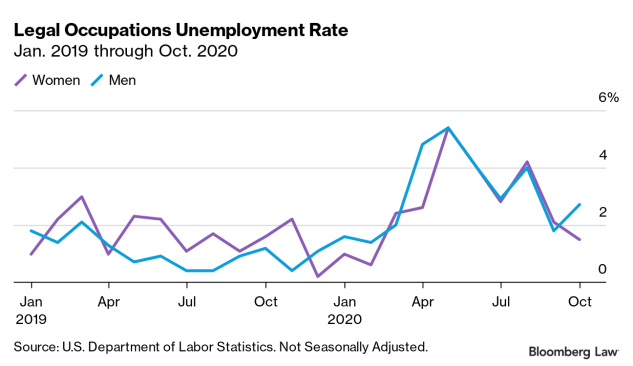 It’s too early to determine whether this split represents an anomaly or the beginning of a trend. But this divergence is uncommon enough to merit close attention in the months to come.