Lawyer employment information is hard to come by. But when we analyze the data we have, we find that lawyers have taken the brunt of legal industry job cuts in 2020. And, unlike prior periods, 2020’s losses in lawyer employment were not immediately preceded by losses in non-lawyer employment (which include lawyers working in adjacent legal fields, such as judges, as well as paraprofessionals).

As a profession, we rely on rumor, anecdotal evidence, and occasional press releases to gain an understanding of the jobs situation for lawyers. If we are very lucky, reporters like Meghan Tribe of Bloomberg Law will combine this information into a useful summary, as she did on July 21. However, stealth layoffs continue to throw a wrench in the works during tough economic times, leaving lawyers guessing about the real number of attorneys being laid off.

The legal industry also reviews analyses of U.S. Bureau of Labor Statistics information on employment and unemployment in legal occupations, which can help us understand the health of the industry as a whole.

There’s also quarterly BLS data on lawyer employment available through Bloomberg Terminal that allows us to break out industry information so that we can see lawyer and non-lawyer categories separately.

Please note that the term “non-lawyers” is being used here to describe occupations other than “lawyer” within the BLS legal occupations category, as defined in its Occupational Outlook Handbook: arbitrators, mediators, and conciliators; court reporters; judges and hearing officers; and paralegals and legal assistants.

The fourth quarter of 2019 was a high note, with the most lawyers employed since 2005, the earliest available data. 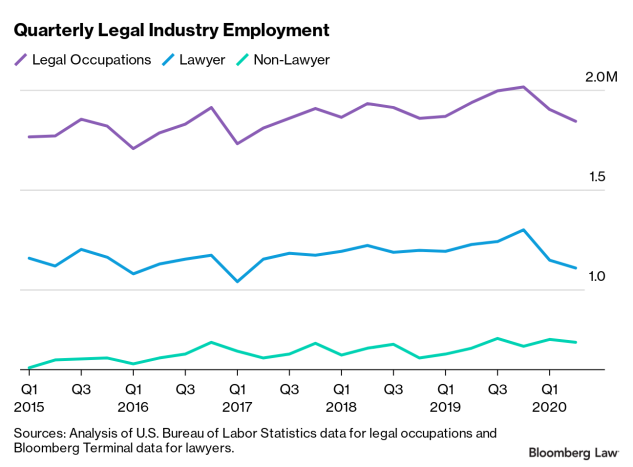 Employment in the broader legal industry shows a similar trend. After ending 2019 with the highest quarterly employment since tracking began in 2000, it also experienced a decline in the first and second quarters of this year. Over the first half of the year, legal occupations employment fell close to 9%. (Note that quarterly data is an average of monthly data. If we compare monthly data for June 2020 to December 2019, the drop in employment was almost 5.5%.)

While both lawyer and overall legal industry employment decreased, non-lawyers working in legal occupations actually saw an increase in employment of close to 3%—a 5.4% increase in the first quarter followed by a 2.5% decrease in the second quarter.

As a result, non-lawyers now comprise almost 40% of legal occupations employment, up from an average of 36.5% in 2019. In fact, on an average annual basis, non-lawyers have not held such a predominant role in the industry since 2012/2013.

While it is natural to focus on the state of jobs today, it may be useful to step back and view the situation through a wider lens. So I analyzed employment data on a 12-month basis, focusing on year-over-year first quarter data.

This analysis shows that, while non-lawyers have historically experienced employment declines in advance of lawyers, we are not seeing that happen this time around. 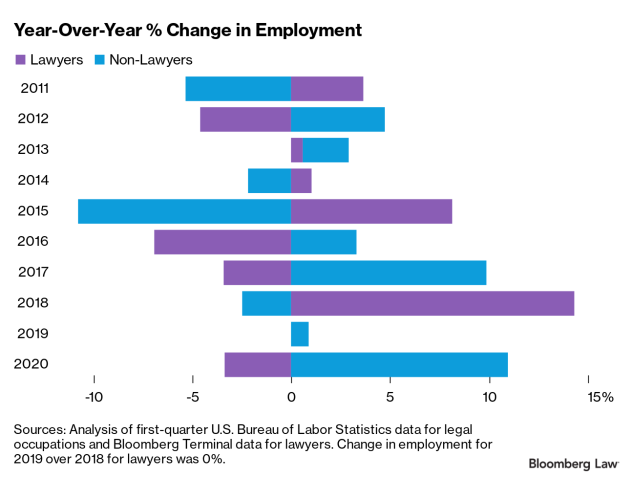 If History Is a Guide, Lawyer Jobs Will Return

When looking at lawyer employment over time, we see an increasing trend. From an average of 961,000 employed lawyers in 2005 to 1.24 million in 2019, lawyers have comprised 60%–65% of total legal occupations employment over the past 15 years.

Looking back at industry struggles over the past decade, on a year-over-year basis, employment figures rebound to pre-decline levels within three years for lawyers and non-lawyers alike.

However, with the increasing prominence of legal technology and the potential for competition from non-traditional legal organizations, including the Big 4 and other law companies, lawyers need to be more flexible than ever. For some thoughts on lawyer careers in this time of turmoil, take a look at my May 18 analysis.