2021 is off to a big start for SPAC mergers. A record number of publicly traded special purpose acquisition companies entered into definitive agreements to take over private targets in February.

The 42 SPAC takeover deals announced last month that are either completed or currently pending and that involve SPACs that have gone public since Jan. 1, 2019 represent the highest monthly total of these SPAC M&A deals in the past year and they double the deal counts seen in even the SPAC-mania months of late 2020. 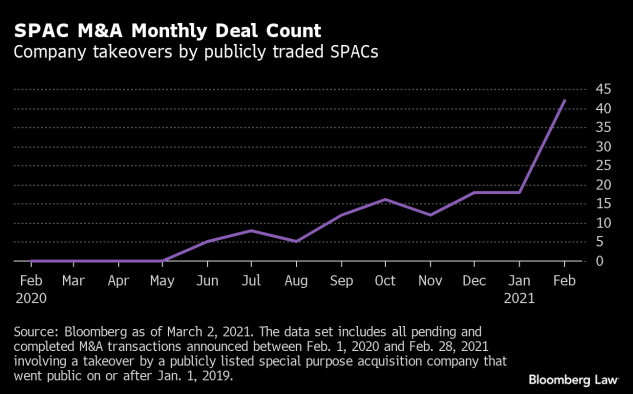 The 42 deals announced in February had an aggregate value of $30.79 billion, dwarfing recent monthly volumes and narrowly beating Sept. 2020’s $30.07 billion in deals. 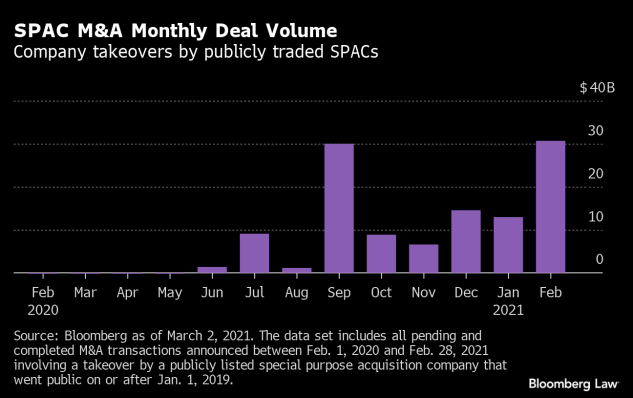 With nearly a month still remaining before the start of the second quarter, this quarter’s SPAC takeover deal count and aggregate deal volume as of March 3 (66 deals, $46 billion) has already by far surpassed last quarter (46 deals, $29.8 billion) and the third quarter of 2020 (25 deals, $40.2 billion).

Hundreds of SPACs that recently went public have yet to enter into definitive agreements to merge with a private target to fulfil their purpose, and the clock is ticking. More SPAC takeovers in the coming months are all but guaranteed.