The shares of DoorDash may have jumped 92% on their first day of trading in December, but SPAC IPOs were the deals truly delivering to insatiably hungry investors in the fourth quarter.

The IPO feeding frenzy was so pronounced throughout most of 2020 that records broke and valuations arguably reached the absurd for many initial public offerings. Traditional IPOs retained their annual crown in both deal count (264 IPOs) and deal value ($98.4 billion). SPAC IPOs, however, surpassed them on both metrics for the first time ever in the fourth quarter. 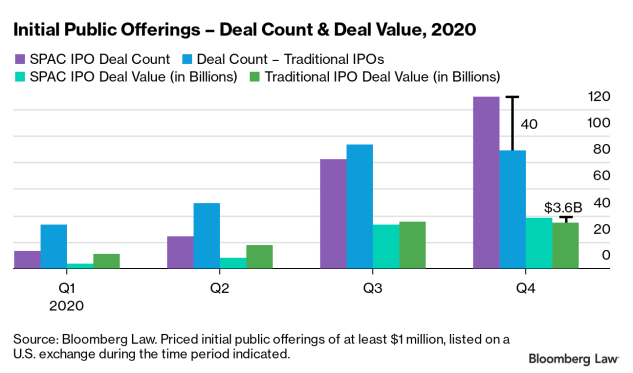 SPACs raised $83.2 billion on 248 deals for the year and scored a stunning victory in the fourth quarter by besting traditional IPOs by 40 deals and raising $3.6 billion more capital.

While traditional IPOs posted eight of the 10 largest initial public offerings in 2020, the biggest deal of the year went not to a unicorn but to a SPAC: Pershing Square Tontine and its $4 billion offering. Snowflake ranked second ($3.86 billion), followed by Airbnb ($3.83 billion), and DoorDash ($3.36 billion). 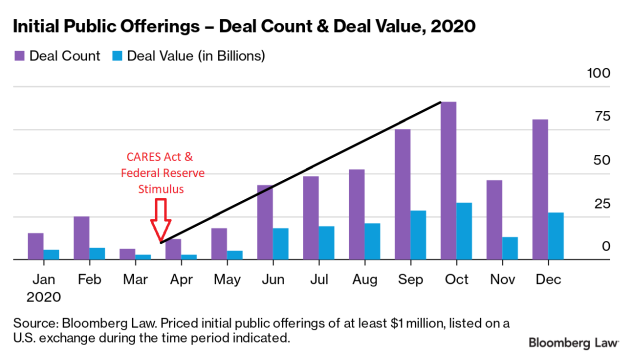 After Congress passed the CARES Act March 27 and the Federal Reserve’s stimulus efforts began to take effect at about the same time, the market began to gain momentum, accelerating until November, when disagreement over additional stimulus and other concerns created a brief market pause. While this bull market is presently helping investors, if this speculative bubble bursts later—when life and fiscal policy presumably return to “normal”—there could be a significant and possibly abrupt valuation reckoning in the markets.

It is difficult to overstate the white-hot state that the IPO market is currently in, with pharmaceuticals doing particularly well. How well? Two new medical IPOs, Scopus Biopharma and Vivos Therapeutics, have triggered trading halts after the price of their shares soared over 700% and nearly doubled, respectively.