In 2Q21, lawyer employment fell by 3.7%, representing its third consecutive quarterly drop. Moreover, the lawyer unemployment rate rose to its highest level since 2Q14 and stands at 1.9%, potentially indicating that despite the overall economic recovery, many lawyers are out of work or left their positions. And while it may seem that lower employment in a field will always lead to higher unemployment, this is not the case. Workers who leave their job but choose not to search for a new job will not contribute to an increased unemployment rate, as they exited the workforce. (Think about individuals retiring or choosing to take a break from working.) The next question is whether unemployed lawyers will seek legal positions. 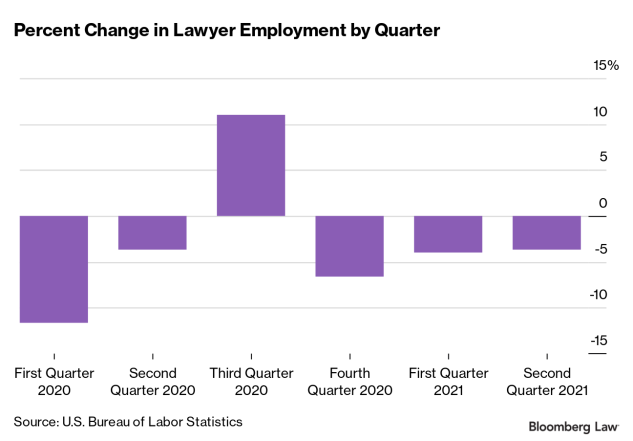 The drop in lawyer employment and rise in unemployment may seem surprising considering the efforts that many law firms are putting into recruiting and retention, such as providing large increases in associate salaries. Firms are on the hunt for talent and have been hiring, as indicated by legal services data from the BLS establishment survey, which show employment increasing every month after January 2021 on an unadjusted basis. Whereas, legal departments are facing different, more negative, economic realities and thus shedding lawyer headcount. This is reflected in legal occupations employment data from the BLS household survey which show monthly declines in employment from the 2021 high of 1.85 million seen in March.

With the economy bouncing back, one could expect that there would be a higher demand for lawyers to complete legal work. But these fluctuations in legal employment are consistent with what we have seen in other economic downturns. As discussed in April 2020, using the Great Recession as an example, “legal occupations experienced numerous unemployment spikes over the course of four to six years … instead of a dramatic increase in the unemployment rate followed by a gradual decline, which is what the United States labor market as a whole experienced.” So a broad economic recovery does not always equate to the robust return of lawyer jobs in the short term.

Like paralegals, law clerks also experienced gains in employment during 2Q21. Employment grew from 21,000 to 29,000, representing 38% growth in this field. Some of these new jobs could be attributed to summer clerkships beginning, so growth in this category may not be permanent. Third quarter BLS data will confirm whether this growth is ongoing or simply the result of temporary positions opening up for law students.

Following strong growth in 1Q21, employment in legal support roles plunged 34.9% in 2Q21 to 71,000. BLS defines legal support roles as those positions that do not fall into the categories of lawyer, paralegal, law clerk, or title examiner, so it is a catchall for positions such as receptionist, courier, intake personnel, and other similar roles. Historically, legal support roles have fluctuated more than other legal occupations from quarter-to-quarter, but this seesawing has become particularly pronounced during the pandemic. 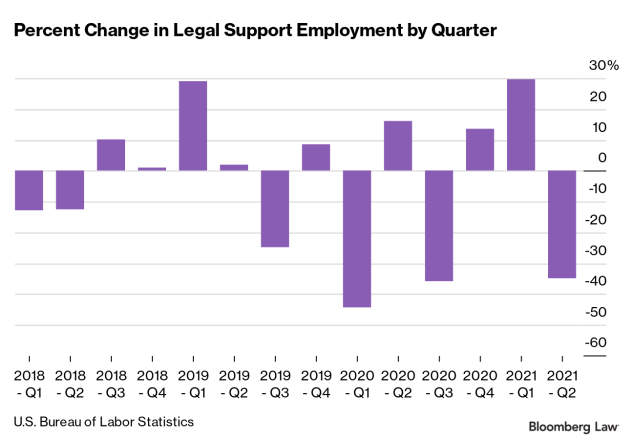 The employment fluctuations in these roles make sense because law firms will sometimes have different needs when it comes to these support roles. For example, there may be a greater need for intake personnel if a firm is growing and the opposite if it is shrinking.

A number of factors could explain this outcome. For example, law firms and legal departments may have staffed up their support personnel expecting their staff to be working from the office full time, but employees, in reality, may be working a hybrid model—lessening the need for in-person support personnel.

Title examiners, abstractors, and searchers enjoyed a strong 2Q21 in term of employment growth, increasing the number employed in the field by 57% to 124,000. And while potentially surprising, there are a few factors that can help make sense of this dramatic increase.

According to the BLS, the top industries for title examiner, abstractor, and searcher employment include: legal services, insurance carriers, real estate, automobile dealers, and oil and gas extraction. And although legal occupations employment fell in the most-recent quarter, overall economic improvement might generally spell better employment prospects for the other industries in which these employees commonly work.

To begin, the housing market is booming. Consumers and businesses require plenty of these positions to assist with buying real estate, which could contribute to an eventual increase in employment in these fields.

Additionally, oil prices are starting to climb. When these prices increase and extraction becomes more profitable, oil and gas companies may need more services provided by title examiners and abstractors, such as examining real estate and ensuring that any new leases are on land where they can operate without title or ownership concerns.

Insurance companies and automobile dealerships could also expect more business from increased economic activity, leading to a better employment picture for this group of employees as well. 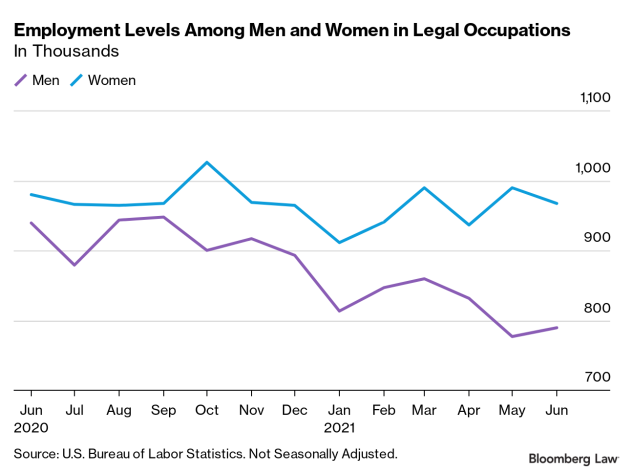 While some believe that the pandemic would usher in a female exodus in the legal field, particularly from Big Law, BLS data show a different story. Overall, the number of women in the legal field is higher than at the end of 2020 even as the number of men continued to fall. This data, however, does not give us insight into whether women lawyers are leaving since it reflects all individuals working in legal occupations.

Lower employment for men could be a result of having held positions that are declining in overall employment in recent quarters, such as lawyer positions, or even of having retired.

BLS monthly employment data show that legal occupations employment shrank slightly in each month of this quarter, following a large drop between March and April 2021.

This could foreshadow more employment woes for the legal field moving forward. Unlike the first quarter of this year, where positive consecutive monthly data bucked the overall negative quarterly trend, the second quarter has both quarterly and monthly data heading in the negative direction, seemingly stagnating on a monthly basis. 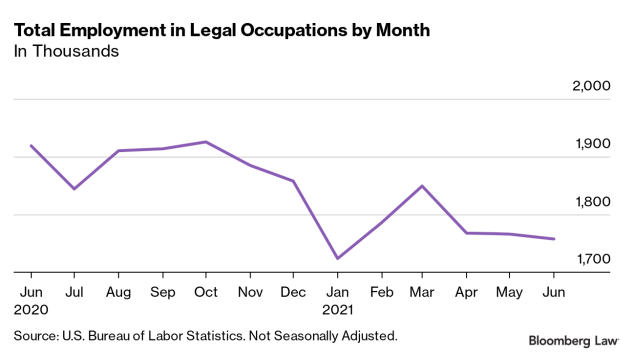 However, overall economic growth and a potential emergence from the pandemic may quickly change these numbers. We will continue to follow the situation, so stay tuned for our next quarterly update.

Bloomberg Law subscribers can find related content on our In Focus: Legal Operations and In Focus: Lawyer Development pages.