Under current circumstances, engaging in non-distressed M&A activity is a sign of financial health. While other top-earning Silicon Valley firms roll forward with strategic acquisitions, HP Inc.—which on Wednesday reported an 11% fall in revenue and announced that it is now among the growing list of companies to suspend buybacks—has zero M&A deals under its belt so far this year. 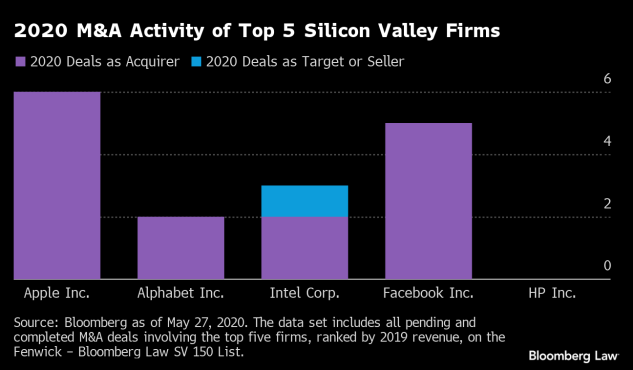 HP Inc. dropped from fourth to fifth place on the 2020 Fenwick – Bloomberg Law SV 150 List, which ranks Silicon Valley companies by annual revenue. And HP’s only M&A activity this year has been its months-long fight to stave off a hostile takeover by Xerox Holdings Corp. In fact, the newly suspended buyback program was previously initiated as part of this effort.

So far in 2020, Apple Inc. is the most active in mergers and acquisitions among the top five firms on the Fenwick – Bloomberg Law SV 150 List, with six completed M&A acquisitions. This number of acquisitions also puts Apple Inc. at the No. 3 spot among the worldwide top tech M&A buyers, led by Accenture PLC and Constellation Software of Canada. 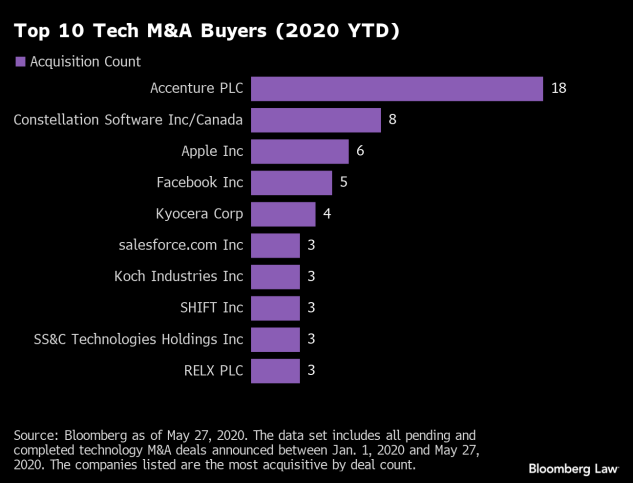 Apple continues to have an appetite for startups. Of Apple’s six acquisitions so far this year, four have been tech startups— three of which have focused on artificial intelligence. The acquisitions have included a virtual reality startup, a natural language AI startup, a mobile weather service, an AI tool startup, and Apple’s most recent acquisition, that of machine learning startup Inductiv Inc., which was announced this week.

Facebook Inc., which was less acquisitive compared to its peers last year, is catching up to Apple, with five acquisitions so far in 2020. Its acquisition of Giphy, announced earlier this month, is the latest.

In the first quarter, global tech saw $107.9 billion in M&A activity—the highest volume of any quarter since the first quarter of 2019. The second quarter does not seem like it will get anywhere close. To date, only $8 billion in deal activity has taken place this quarter. 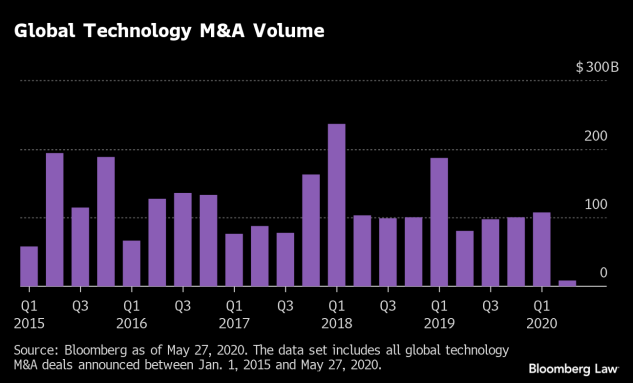 The largest tech deals of the year thus far were announced before the pandemic was declared on March 11. The three largest have been in the fintech space: the $8.6 billion Ingenico Group SA–Worldline SA European payments deal, the $7.1 billion Credit Karma Inc.–Intuit Inc. deal (Intuit Inc. is ranked 24th on the SV 150 list), and the $5.3 billion Plaid Inc.–Visa Inc. deal.