A sign attached to the ceiling with the inscription "Exit."
Gerald Matzka/picture alliance via Getty Images

The Bureau of Labor Statistics’ monthly employment figures for September show that large numbers of workers in legal occupations are leaving unemployment behind, but this is not necessarily the good news you think it is. Most of these workers are not rejoining the ranks of the employed—not in the legal industry, anyway.

Last month, the unemployment rate for legal occupations was halved, and then some: From 4.1% in August to 2.0% in September. That is the lowest monthly rate since February, when the rate stood at only 1.0% before doubling—and then some—to 2.2% in March. 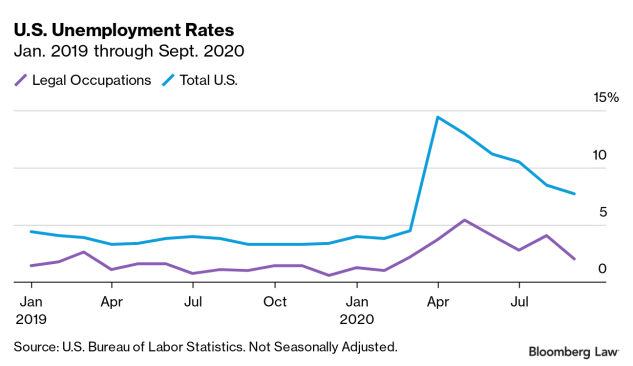 In all, approximately 39,000 individuals in the legal occupations category said they were unemployed in September, down from some 82,000 in August. That drop of 43,000 individuals is the largest month-to-month decrease since 2000 at least.

So we should see a comparable increase in employment in legal occupations in September. But we don’t.

Total employment in legal occupations did rise in September, but only by about 4,000 workers. That adds almost nothing to an occupational category that comprised 1.91 million workers last month. And it certainly doesn’t account for the 43,000 legal professionals who left unemployment. 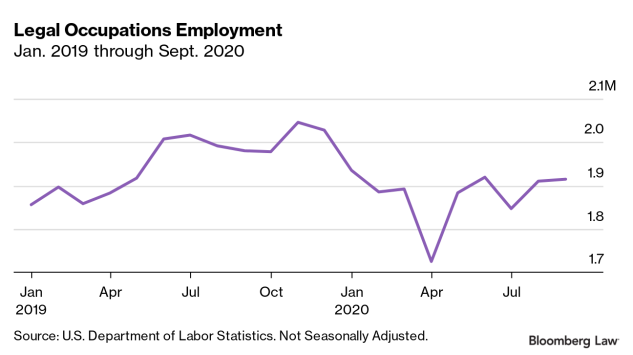 This is the second time in three months that a big drop in unemployment for legal occupations failed to be met with a comparable rise in employment.

So, where have all of these suddenly no-longer-unemployed legal workers gone? There are two likely destinations: into other industries, or out of the labor force entirely.

Overall, the BLS reported an increase in total U.S. employment of 661,000 in September, which is much lower than the gains made in previous months. Meanwhile, Americans left the labor force in greater numbers in September. The civilian labor force participation rate fell to 61.4% last month—the third-lowest monthly percentage on record, after April and May. So it is likely that many of the now-missing legal workers simply left the labor force.

September’s smaller employment gains and the larger exodus from the labor force doesn’t portend many soft landings for the tens of thousands of legal workers leaving the ranks of the unemployed.