Cryptocurrency has driven a digital armored truck through the gaps in the U.S. financial regulation regime—and SEC Chairman Gary Gensler made plain in his speech to the Aspen Security Forum Aug. 3 that he has had enough. Gensler feels the mostly unregulated $1.6 trillion cryptocurrency market needs strong oversight and, unsurprisingly, sees the agency he leads as the one to do it.

In his speech, Gensler spoke about five regulatory problems he sees with crypto and the new legal powers he is seeking from Congress to monitor crypto exchanges. His ultimate goal is to bring an end to the industry’s current Wild West environment.

Cryptocurrency is a form of private money that is exchanged without any intermediary, such as a central or commercial bank. Because there is no intermediary, there are no intermediary regulations. The absence of an institutional role for control over cryptocurrencies has permitted significant abuses. Cryptocurrencies present issues of ransomware, money laundering, tax evasion, and other crimes precisely because they are unregulated. Many crypto investors have been victimized by the promoters of fraudulent digital tokens and by hackers stealing digital assets. Some fraudsters have been prosecuted, and the SEC claims it has never lost a crypto case thus far. Even so, problems remain widespread in this nascent industry where the lure of quick, astronomical returns amid a turbulent market often override individual investors’ better judgment. 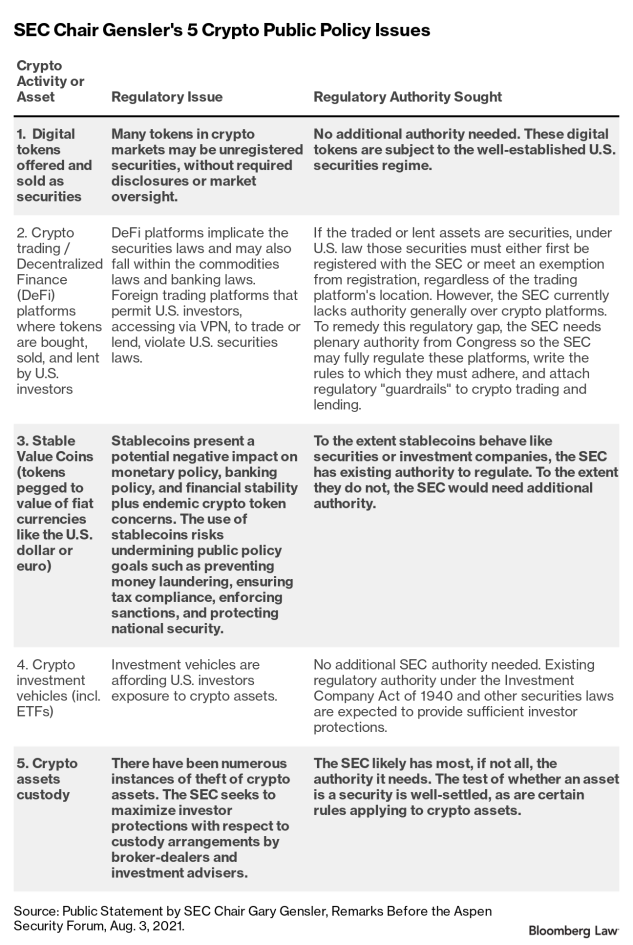 The value of cryptocurriences has been prone to wild swings, such as Bitcoin dropping 31% the morning of May 19, only to rally 33% in the afternoon. Despite this roller-coaster market, Gensler is not looking to drive out investor speculation; rather, his goal is to protect investors from fraud and price manipulation. In a recent speech before the Aspen Security Forum, Gensler presented what he views as the five most significant public policy (regulatory) issues presented by cryptocurrencies.

The problem of cryptocurrencies being created and financed in contravention of the securities laws has fueled the SEC’s most significant digital assets enforcement efforts to date. The U.S. Supreme Court’s Howey Test for what is an investment contract (i.e., a security regulated by the SEC) remains good law—and many crypto assets appear to meet this test. Any digital token that qualifies as a security under Howey must either be registered or qualify for a registration exemption.

Decentralized finance platforms present the most vexing problem for Gensler and the SEC. Simply put, the SEC largely lacks the legal authority to regulate these trading platforms. Most DeFi platforms allow trading in 50 or more different tokens, 24 hours a day, seven days a week. Some traded tokens may be securities, while the SEC has publicly declared that other tokens, such as Bitcoin and Ethereum, are sufficiently decentralized so as to avoid coverage. If the traded or lent assets are securities, under U.S. law, those securities must either first be registered with the SEC or meet an exemption from registration, regardless of the trading platform’s location.

Stablecoins pegged to established nation-state currencies (fiat currencies) would seem to avoid many of the typically problematic features of cryptocurrencies. The real issue with stablecoins lies in how they are used—with significant public policy implications for financial stability, banking, and monetary goals. Stablecoins are frequently used to facilitate trades between two different cryptocurrencies. Unfortunately for governments, that means they can be—and are—used to launder ill-gotten money, evade taxes, and skirt sanctions.

Investment vehicles, including ETFs, are giving investors exposure to crypto assets, and the risk that that they entail.

Digital assets are gaining acceptance in the traditional financial world, with firms such as State Street, Goldman Sachs, and Fidelity offering digital asset services. Theft of digital assets has been a serious problem that the SEC is keen to address via asset custody arrangements by broker-dealers and investment advisers.

The Gaps in SEC Authority to Regulate Crypto

The SEC enjoys broad authority to regulate securities and investment companies. Wherever and whenever cryptocurrencies stray into those regulatory regimes, the SEC has the tools it needs to protect investors.

Unfortunately for Gensler and the SEC, the securities laws were fundamentally written between 1933 and 1940—long before cryptocurrencies and decentralized finance platforms like crypto exchanges were envisioned. A critical gap in the agency’s authority exists in that it largely does not have jurisdiction over crypto trading platforms.

Gensler’s proposed remedy is for Congress to bestow on the SEC plenary authority to regulate and write rules for decentralized finance platforms, and to attach regulatory guardrails to crypto trading and lending. Other, less fundamental authority gaps exist relating to some of the other five public policy issues, and are identified in the table.

The call by Gensler for Congress to grant the SEC plenary authority over cryptocurrency trading platforms represents a significant attempted expansion of the SEC’s jurisdiction. The SEC is currently also pushing beyond its usual turf in other areas, including disclosures related to climate change, greenwashing, and workplace data, creation of a climate and ESG (environmental, social and governance) task force, and scrutiny of corporate board diversity. The climate disclosure efforts alone have already led to a deluge in corporate lobbying and criticism from commissioners Hester Peirce and Elad Roisman.

These ambitious efforts are coming amid staffing shortages at the agency that began with a hiring freeze in 2016 and resulted in several hundred staffers leaving. A GAO report indicates that the SEC has struggled to rebound since. To handle his multifaceted, ambitious policy agenda, Chairman Gensler might also want to consider asking for a bigger staffing budget when his crypto platform authority request is considered by Congress.

Bloomberg Law subscribers can find related content on U.S. federal and state regulation of cryptocurrency activity on our Fintech Compliance resource, on AML laws and regulations in our AML Compliance resource, on digital coin offerings on our In Focus: Initial Coin Offerings page, regulation of broker-dealers on our In Focus: SEC Regulation Best Interest page, and on the securities laws generally on the Securities Practice Center resource.