The National Labor Relations Board’s PCC Structurals ruling may be making it harder for a union to represent a specific subgroup of workers within a company, but it has not led to an overall shift in labor’s focus toward organizing bigger bargaining units, NLRB election results show.

A recent Bloomberg Law review found dozens of cases in which the NLRB invoked its December 2017 decision when rejecting the narrow scope of proposed bargaining units (sometimes referred to as “micro units”), leaving unions with the choice of either giving up or spending time and money to organize a larger, less cohesive cohort.

This matters because unions have always had more success in small-scale elections than in larger ones. The union win rate since mid-2014 has been definitively higher in elections covering fewer than 50 workers than in all other size categories. 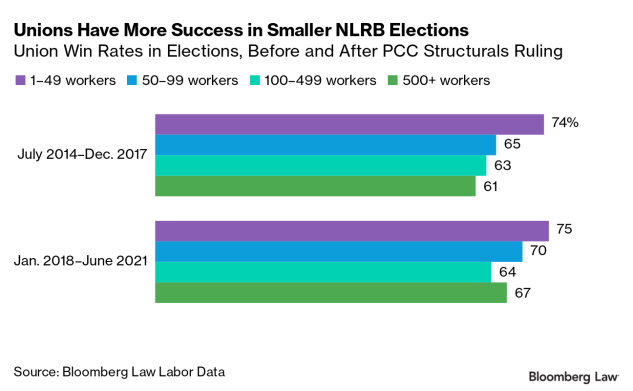 With the NLRB’s midyear election statistics now in, we can look at seven years of data—half before PCC Structurals and half after—and see that the ruling has had no negative effect on the overall number of small-scale elections brought and won by unions.

In fact, small-scale elections have actually taken on a slightly larger share of all elections since the ruling. More than 72% of all elections held from January 2018 through June 2021 involved bargaining units of fewer than 50 workers. That’s slightly higher than the 70.7% share in the period from July 2014 through December 2017. 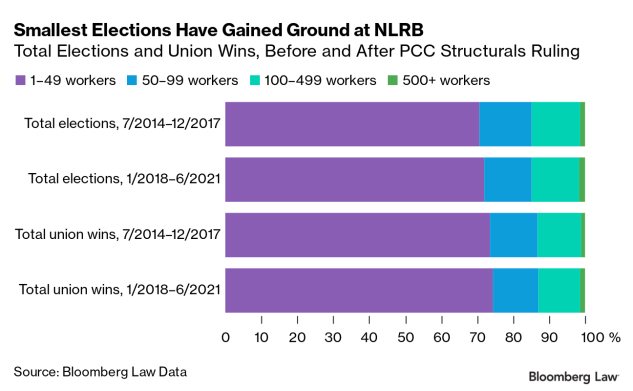 The smallest bargaining units also slightly increased their share of union wins in NLRB elections—from 73.7% of all union wins before PCC Structurals to 74.3% after.

Of course, most small bargaining units are not part of a much larger, union-susceptible workforce; they’re small because their employer is small, which disqualifies them as a target of a PCC Structurals-style upsizing attempt. But the point is that, despite the ruling’s power to alter or thwart unions’ organizing efforts, it’s still the smallest groups of workers that are the driving force of unionization.