A Trump-era federal labor board ruling on bargaining-unit size is reshaping the outcome of union elections nationwide, making it easier in some cases for employers to put up barriers before a vote even takes place.

Decisions by the NLRB at the regional level to expand proposed bargaining units prior to an election force unions to win over more workers—sometimes thousands more—than they had anticipated.

The result is that union organizing campaigns are being thwarted in many cases under the auspices of the NLRB, the agency that Congress charged with encouraging collective bargaining, rather than being decided by the will of workers in a proposed bargaining unit.

PCC Structurals made it easier for employers to argue that a union has proposed an improper unit of workers, giving them more sway to shape the bargaining unit’s scope to their advantage. With majority control of the NLRB poised to flip from Republican to Democratic as early as next month, the PCC Structurals decision may be an early target to be overturned by the Biden board.

The significance of the PCC Structurals decision came into full view last month when the International Association of Machinists filed for a union election at a plant in Tennessee. The union sought to represent a tiny slice of the workforce—87 tool and die workers at a facility comprised of more than 4,000 workers. But Lisa Henderson, the NLRB acting regional director based in Atlanta, said the unit wasn’t distinct enough from the rest of the workforce, citing the PCC Structurals standard.

Henderson required the union to organize a wall-to-wall unit of 4,300 employees, and also gave the Machinists the daunting task of winning support from 30% of the proposed unit—about 1,300 workers—or face having their petition dismissed. The Machinists walked away from the election and instead asked for a review by the full NLRB in Washington, which has yet to take place.

PCC Structurals short-circuited an earlier bid by the Machinists to unionize workers in the South. The union won a 2018 election to represent a unit of about 175 of the 7,000 workers at ’s facility in North Charleston, S.C. But the NLRB rejected that victory in 2019, ruling that the smaller unit wasn’t appropriate under its legal test in PCC Structurals.

NLRB spokeswoman Kayla Blado declined to comment on the effects of PCC Structurals.

Those outcomes weren’t unusual in the post-PCC Structurals era. In at least four dozen cases, NLRB regional directors invoked PCC Structurals to reject the scope of proposed bargaining units, according to a Bloomberg Law review of more than 200 cases since December 2017. In several instances, unions chose to abandon the organizing drive rather than face a near-certain defeat.

The effects of PCC Structurals haven’t been uniform. In many cases, regional directors have approved the smaller units proposed by unions. But by changing the legal landscape, the decision has affected union elections even when it’s not cited in a regional director’s ruling.

The union attempting to represent workers at an Alabama fulfillment center earlier this year accepted the company’s demand for a larger bargaining unit to avoid months of litigation, a delay that could have allowed the company to assemble an even more robust defense.

But in doing so, Amazon was able to pack the unit with seasonal employees, which may have diluted support for the Retail, Wholesale, and Department Store Union. 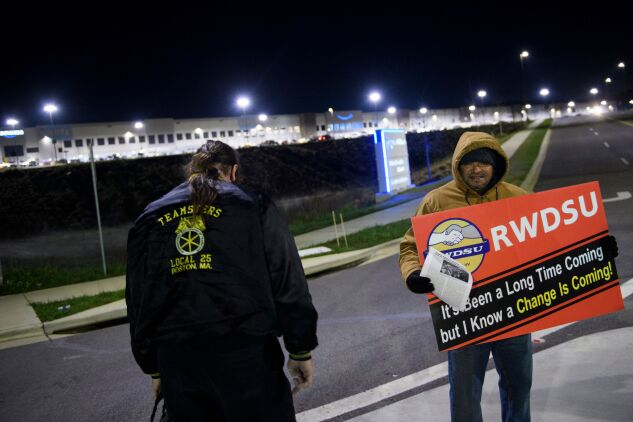 Union supporters demonstrate outside the Amazon.com fulfillment center in Bessemer, Ala., in March, prior to a closely watched union election.
Photographer: Patrick T. Fallon/AFP via Getty Images

“When you had a situation like in Amazon, where the union conceded to allowing the unit to be expanded to casual employees—seasonal employees—one could say the union has pretty much conceded a loss,” said Mark Gaston Pearce, a former NLRB Democratic chair during the Obama administration.

The legal test for smaller bargaining units depends on whether workers who wouldn’t be included in the union have meaningfully distinct interests that outweigh their similarities with proposed members.

Determining those shared qualities—a “community of interest,” in legal parlance—turns on factors like whether workers have distinct skills, training, supervision, job functions, and responsibilities.

In PCC Structurals, the Republican-led NLRB dumped a separate part of an earlier legal test from the Obama-era Specialty Healthcare decision, which had required employers to prove that the petitioned-for unit had an “overwhelming” community of interest with other workers, not just a casual one.

Although PCC Structurals didn’t totally eliminate deference to a union’s wishes on unit composition, throwing out the “overwhelming” standard from Specialty Healthcare has made it easier to overcome that deference, said Sara Kalis, an attorney with Paul Hastings LLP who represents employers.

The NLRB clarified the legal standard for smaller units in its decision nixing the Boeing election in South Carolina.

Unions in some cases have still been able to fend off employer challenges partly because PCC Structurals and Specialty Healthcare basically use the same community of interest test, said Matthew Ginsburg, associate general counsel for the AFL-CIO.

“When Specialty Healthcare was the law of the land I was constantly saying this to other people, ‘I thought the other side was acting hysterically,’” Ginsburg said. “The vast majority of these cases turn on the same analysis.”