Despite a low number of shareholder proposals targeting companies’ goals to reduce greenhouse gas emissions so far this year, those that have been filed at oil majors have gained notable support from shareholders.

The number of proposals in the GHG/methane emissions category (four) is already more than were filed all of last year (three). This is, however, still a far cry from 2017’s and 2018’s numbers (14 and 20, respectively), according to data from the Bloomberg Terminal as of May 28. This number may go up, of course, as annual shareholder meetings are still ongoing. 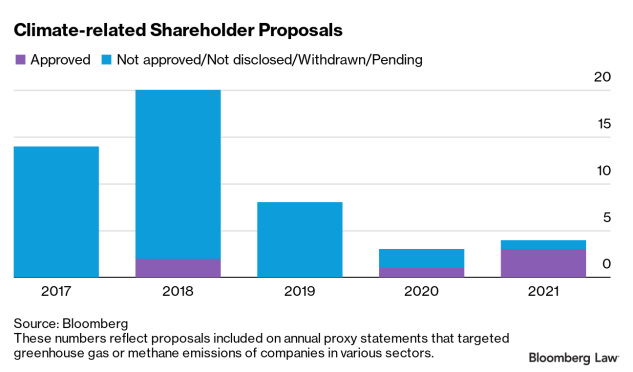 This year, three of the four proposals in the GHG/methane emissions category have been filed at oil majors—Phillips66, ConocoPhillips, and Chevron Corp. Those three received 80%, 58%, and 61% of shareholders’ votes, respectively. By contrast, in 2018, only two proposals out of the 20 in this category received majority support from shareholders.

These high approval rates sent strong messages to the oil majors that they didn’t do enough to cut their Scope 3 emissions throughout their value chain. For example, the proposal filed at Chevron requested the company “substantially” reduce emissions from the use of its products.

One proposal submitted to General Motors Co. stands out. It specifically asks the company to tie its executive compensation metric to the progress toward its GHG emissions reduction targets. The proposal notes that “executive compensation is an effective way to incentivize achievement of performance targets.” It will be voted on at the company’s annual meeting June 14. This proposal serves as an example of how shareholders can target climate action plans of non-oil companies like GM.