The European Union and the Union flag sit together on bunting on March 17, 2016 in Knutsford, United Kingdom.
Christopher Furlong/Getty Images

Deal or no deal, Brexit uncertainty has taken a toll on the United Kingdom’s 2019 inbound and outbound cross-border M&A flows. The U.S. dollar value of U.K.-acquirer outbound cross-border mergers and acquisitions through the third quarter is $47.4 billion lower (47% less) than 2018. To catch up to 2018, an enthusiastic fourth quarter—including a mega deal or two, or a general surge in deals—would have to ensue.

Consistent with my observation last quarter about a number of surges in U.K.-to-U.S. M&A starting in 2016, the year of the Brexit referendum, the United States continues to be a winner in all of this: by volume, deals involving U.S. targets constitute 60.5% of all U.K. outbound M&A so far in 2019. For U.K. acquirer/U.S. target investments, 2019’s volume of $42.9 billion through the third quarter has already surpassed 2018’s volume for this subset of deals. 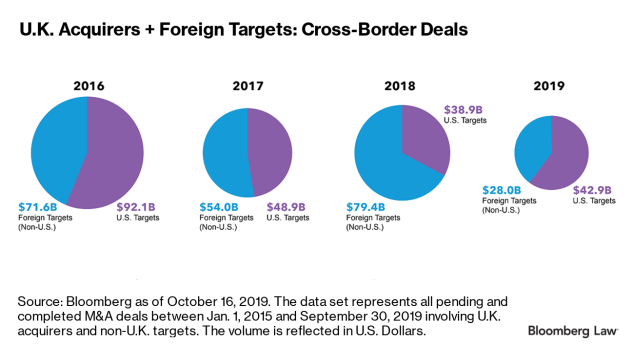 It is remarkable, and seemingly not a mere coincidence, that 2019 is on track to be the second year since 2016 in which the volume of U.K. outbound acquisition of U.S. targets is larger than U.K. outbound cross-border acquisitions in the rest of the world combined. Arguably, in 2019, the year that a no-deal Brexit became a strong possibility, the level of anxiety has reached that of 2016, the year that the U.K. voted to exit the European Union. And in anxious times it appears that U.K. buyers turn to acquisitions in the U.S. 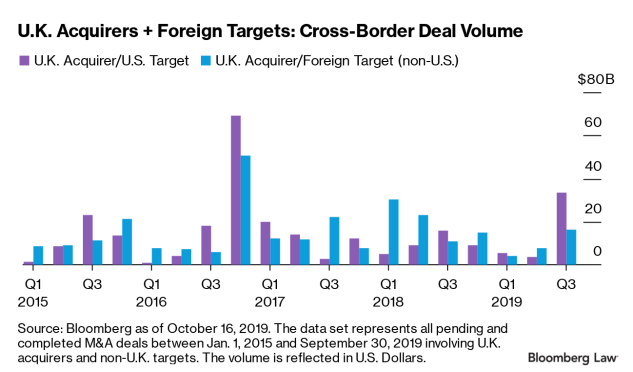 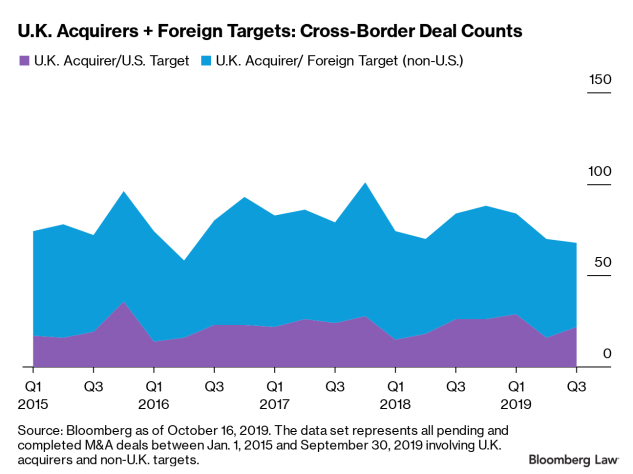 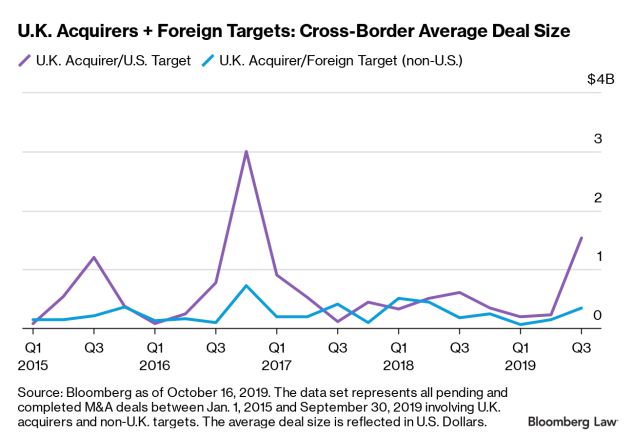 2019: A Much Slower Year for Inbound Cross-Border Purchases in the U.K.

To date, the aggregate dollar value of U.S. investments in U.K. targets has fallen 53% over last year. This drastic drop in volume isdue in part to the fact that last year’s aggregate volume included the $50.7 billion Sky-Comcast mega deal. No U.S. acquirer/U.K. target mega deal, valued at $10 billion or higher, has been announced thus far in 2019. 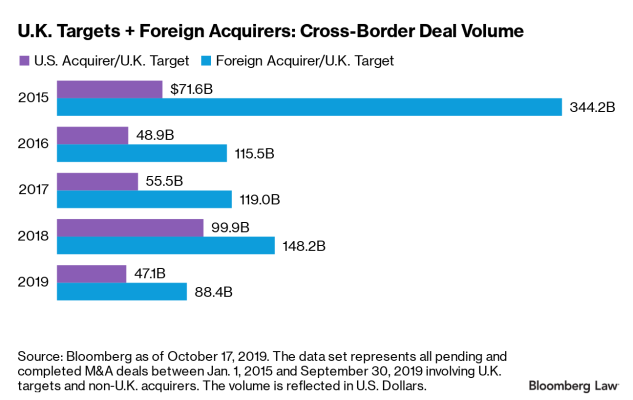 The deal count (211) and dollar volume ($88.4 billion) of all cross-border M&A acquisitions are both on track to be significantly lower this year than in 2018. To catch up to last year’s totals, 121 deals with an aggregate dollar value of $59.8 billion would have to be announced in the fourth quarter.