The Brexit countdown may be ticking below 100 days, but deal flows between the United States and the United Kingdom continue to show resilience. In fact, M&A going in both directions has achieved record volumes since the U.K.'s June 23, 2016 referendum. While Britain’s decision to leave the European Union may have created uncertainty and pessimism in other quarters, its effect on M&A with the U.S. seems to be restrained.

From 2010 to 2018, U.S. acquisitions of U.K. targets significantly outpaced flows in the reverse direction every year except 2016 and 2017. During those years, during and right after the Brexit referendum, U.K. buyers spent much more than U.S. buyers. Last year saw a return to the pre-2016 trend and 2019 appears on pace to do the same. 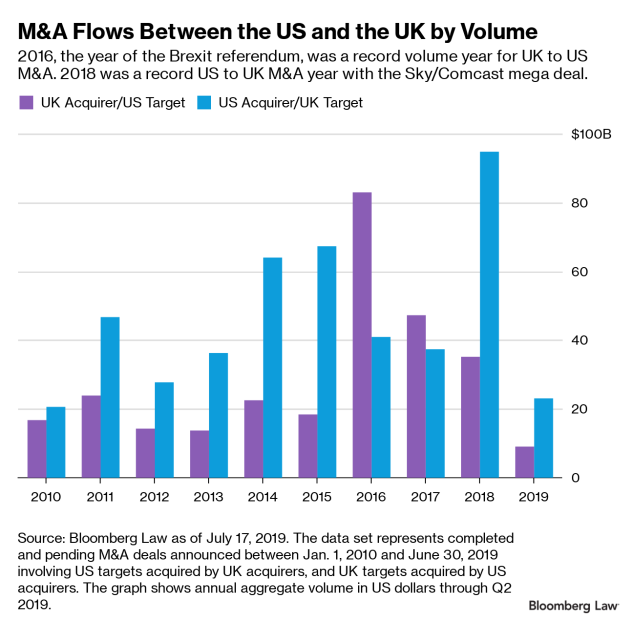 Since the 2016 spike in U.K. buying in the U.S., there has been a steady downward trend in annual volume and deal size. Aggregate deal volume is currently on pace to be the lowest since 2013. Even so, as of the second quarter of 2019, average deal size is on track to be significantly higher than years prior to 2016. U.K. investment in U.S. targets is on track this year to resemble pre-2016 years. 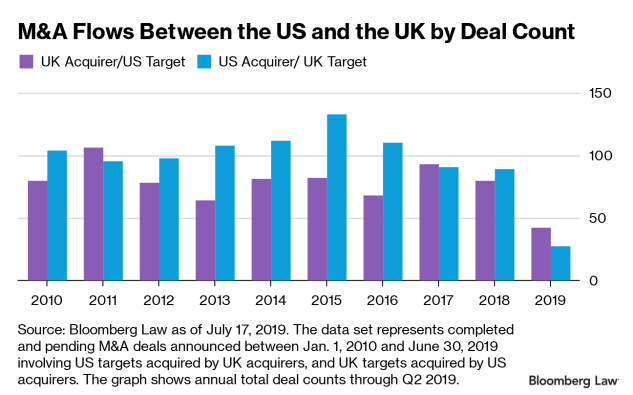 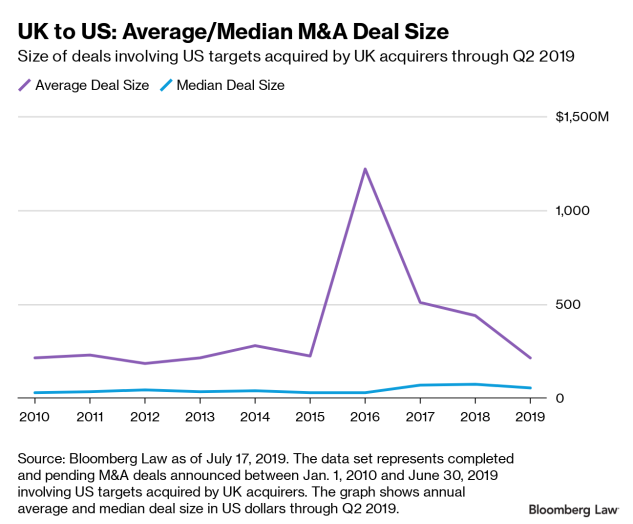 Trends in U.S. acquisitions of U.K. targets over recent years do not parallel flows in the reverse direction. Before the Brexit referendum, 2014 and 2015 were very high-volume years for U.S. acquisitions of U.K. targets, with $63.5 billion and $67.3 billion in aggregate volume, respectively. Last year appeared to be an unusual year for U.S- to-U.K. M&A, with a record high volume of $94.6 billion, but $50.7 billion of that number was contributed by the Sky-Comcast mega deal.

This year’s M&A purchases by U.S. parties in the U.K. is on pace to be a record slow year by deal count, but less so by volume; whether this is just a mirroring of slow First Half 2019 Global M&A or a new trend unique to the U.K. and the U.S. remains to be seen. Recent trends suggest that there is no reason to be concerned about U.S.-to-U.K. M&A investment as the overall trend appears quite healthy. Just last week, U.S. private equity firm Advent International Corp announced that it will acquire U.K. defense firm Cobham Plc for $5 billion. This acquisition will boost third quarter volume of U.S.-to-U.K. deals.

For U.K. M&A buyers, the top U.S. target industry of this decade has overwhelmingly been agriculture, which, along with pharmaceuticals and commercial services, have made the consumer, non-cyclical sector the most popular, with nearly half of total deal volume for all sectors . 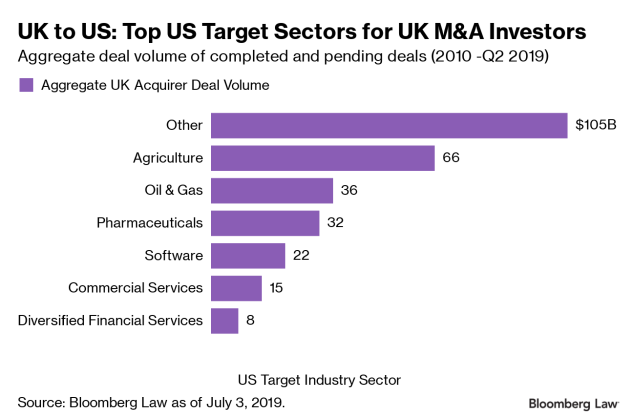 For U.S. buyers, the media, diversified financial services, and telecom sectors are the most popular sectors for acquisitions in the U.K. 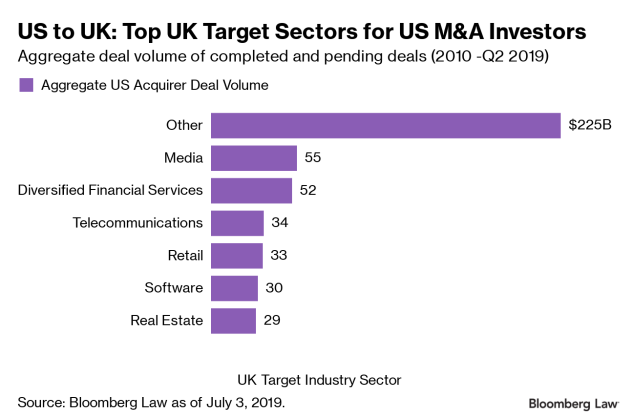