Donald Trump is beating Barack Obama and Bill Clinton—when it comes to the pace of his pardons, anyway.

Scholars and attorneys who spoke to Bloomberg Law say that Trump’s grants stand out for the fact that he has shunned the traditional pardon review process and is using his power much earlier in his tenure than recent predecessors.

Dick Cheney aide I. Lewis “Scooter” Libby, two ranchers convicted of arson to federal lands, and a great-grandmother convicted of drug trafficking whose case was championed by Kim Kardashian also count themselves among the grateful.

It’s the lack of regular process that bothers a former pardon attorney.

Clemency “has always been a bit of a lottery,” Margaret Love, who served as the U.S. pardon attorney from 1990-97, told Bloomberg Law. The pardon attorney serves in the Department of Justice and advises the president on clemency by reviewing applications and making recommendations.

“But at least a lottery is fair,” she said, pointing out that Trump hasn’t been going through the “ordinary” process.

Though Love and others have flagged the arguable conflict posed by a DOJ office reviewing cases for clemency that DOJ prosecuted, the apparent lack of any process under Trump “doesn’t look like it’s very fair,” she said.

“The process here is a real problem and the failure to attend to the ordinary caseload of pardons—not to mention thousands of commutation applications—is a shame,” she said.

Others, too, noted Trump’s idiosyncratic approach.

He’s “making decisions haphazardly without all of the information, which you would expect when you go around the normal process,” Daniel T. Kobil, a professor at Capital University Law School in Columbus, Ohio, told Bloomberg Law. “There is a reason why most presidents want an investigation and recommendation from the U.S. pardon attorney, and that is so that they have all the information. And none of his have gone that route,” he said.

“What’s been noteworthy of the track record that Trump has to date is this lack of apparent methodology,” Cara Drinan, another professor who studies clemency, told Bloomberg Law.

“He appears to not pay close attention to the Department of Justice guidelines,” she said, including, for pardons, waiting five years after a conviction and showing evidence of rehabilitation.

It’s not unprecedented to go outside the normal process, Kobil noted, pointing to Clinton’s 140 pardons at the end of his term. That “became a scandal that Republicans spent a great deal of time holding hearings on and called Pardongate,” Kobil recalled.

Other presidents have detoured from the typical process, but “it doesn’t ever seem to have been done so blatantly,” he said.

Of course, there’s no constitutional requirement to abide by a certain clemency process. “Legally speaking, ignoring your own process is fine,” Elizabeth Rapaport told Bloomberg Law. She’s emeritus professor of law at the University of New Mexico.

DOJ declined comment through a spokesperson. The White House didn’t immediately respond to a request for comment.

And The Winners Are 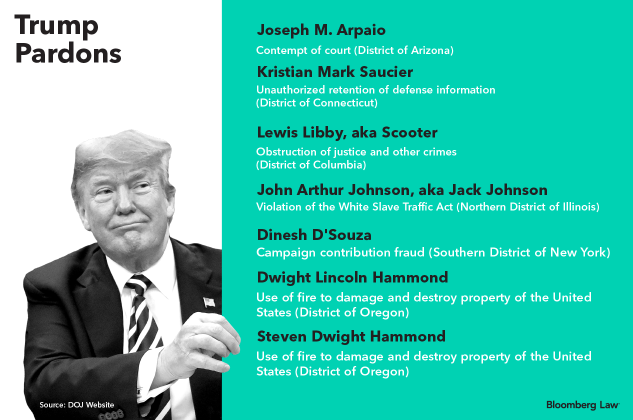 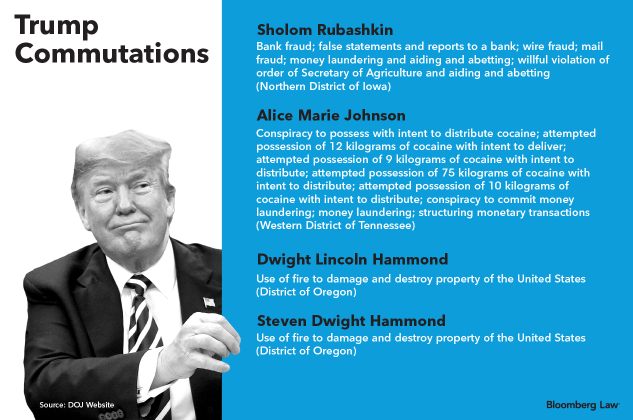 Scholars vary in the degree to which they’re willing to label Trump’s clemency grants as outliers, or worse.

“There are different paradigms for presidential clemency,” University of Minnesota Law School professor JaneAnne Murray, who also represents clemency applicants, told Bloomberg Law. Some presidents “focused it on particular categories of people” and “some used it to close a political chapter and create a clean slate going forward,” she said, giving the example of Gerald Ford’s pardon of Richard Nixon following his resignation over Watergate.

“But most have used it in an ad hoc way,” Murray maintained, concluding that it’s “too soon to make sweeping statements about President Trump’s strategy (if any) in using his pardon power.”

Love, who now represents clemency applicants in private practice, said there’s nothing really unusual about who’s received these pardons compared to past administrations. In Arpaio’s, for example, she sees an echo of Ronald Reagan’s pardon of FBI officials who approved illegal surveillance.

Some see a different picture.

“When you come to the pardons, I think what is notable about them is that, with the exception of the posthumous pardon of Jack Johnson, all of them are political in a way that is unusual,” Rapaport said. (Like Trump’s commutation of Alice Johnson, which was prompted at least in part by Kardashian, Jack Johnson’s pardon too was motivated by a celebrity sponsor—Sylvester Stallone, star of the Rocky movies.)

And though Rapaport acknowledged that seemingly political pardons aren’t new, Trump’s “are all of a very different character,” she said, because they’ve been “aimed at some segment of the political right.”

Arpaio is “notorious for mistreatment of Latinos and his defiance of the federal government,” she observed. His contempt conviction stemmed from his failure to heed a judge’s order not to engage in racial profiling. Libby and D’Souza likewise find varying levels of support in Republican circles, and the pardon of the ranchers, the Hammonds, “was a nod to the western anti-federal grazing crowd and the militias,” she said.

The lesser-known Saucier was convicted of a crime similar to what some Republicans, including Trump, accused Hillary Clinton of related to her handling of classified information.

Love flagged as unusual that the Hammonds were pardoned while they were still serving time, which is apparently why their sentences were commuted as well.

Kobil deemed Trump’s use of his clemency power “quite appalling.”

“It looks like he is employing it not as a mechanism to ensure that our justice system is functioning properly, but as a way to reward friends and carry out vendettas,” he said, pointing to the Arpaio and D’Souza pardons. “That’s the sort of thing that a monarch does. It’s not the sort thing that a U.S. President has tended to do.”

Right out of the Box 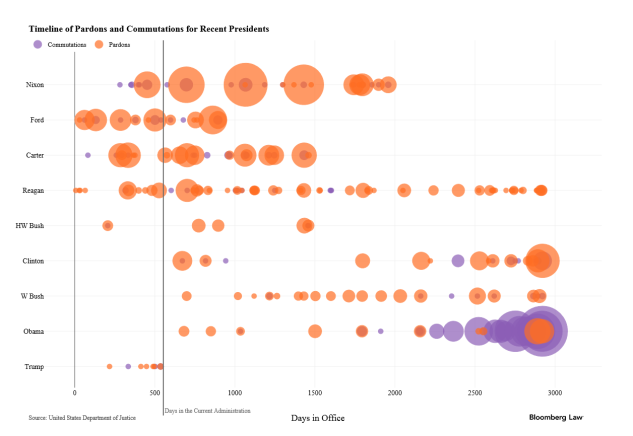 Putting aside the quality of Trump’s mercy, one objective feature that stands out is his early start—relative to his recent predecessors, anyway.

He’s the first since George H.W. Bush to issue clemency by this point in his tenure, according to Department of Justice data analyzed by Bloomberg Law. Obama’s clemency came late but he delivered a historic number of commutations at the end of his second term.

“He’s doing it right out of the box,” Rapaport said. “If you look at Clinton, Bush, Obama, they did no clemency in the first two calendar years of their administrations.”

And despite being critical of Trump’s clemency, Kobil nonetheless thinks “it is good that the president is at least taking an interest in the clemency power during the first couple years in office.”

“Previous presidents have generally ignored pardons and commutations early in their first term,” he said, “and I don’t think that has served the country well, because what they’ve ended up doing sometimes is, like President Clinton, issuing a great many pardons at the very tail end of their term without appropriate consideration.”

Compared to the pardons, “the commutations seem much more vanilla, more ordinary,” Rapaport said, noting there was bipartisan support for the commutation of meatpacking executive Sholom Rubashkin, and that Alice Johnson was also “someone serving a long sentence, so there’s nothing particularly remarkable about that.”

Kobil and Drinan were also less critical of the Johnson commutation.

“Her case is a perfect example of a case that’s ripe for commutation,” Drinan, who teaches at Columbus School of Law at the Catholic University of America in Washington, said. “She had already served more than two decades for a non-violent drug offense.”

But though Rapaport observed that the kind of “special pleading by someone with access” like Kardashian “is hardly unusual,” some are dismayed by how the Johnson commutation came about.

“It’s troubling to me that her case only came to the president’s attention because of the efforts of a reality TV star,” Drinan said. “This is not supposed to be a willy-nilly process.”

The Johnson commutation “was probably deserved,” Kobil conceded. “But there are a great many people who would deserve that commutation, as President Obama found, who are serving long sentences for non-violent drug offenses in federal prison.”

Yet Obama’s historic effort was cold comfort for Johnson. At a July 25 clemency event at George Washington University Law School, she expressed feeling betrayed in being passed over by the last administration.

Never stop fighting, she said, no matter who is in office.

With assistance from Christina Brady