A man who carried a “Trump 2020” flag onto the Senate floor was sentenced to eight months behind bars, the first prison term resulting from the Jan. 6 riot at the U.S. Capitol.

Paul Hodgkins, 38, was sentenced Monday in federal court in Washington after pleading guilty last month to obstructing an official proceeding. The Tampa, Florida, resident’s punishment could offer a preview of what awaits other supporters of former President arrested over their actions that day.

The sentence was considerably less than the 18 months the government had requested. U.S. District Judge said he had taken into account that Hodgkins had no previous criminal record, didn’t engage in violence at the Capitol and seemed to have taken steps toward rehabilitation.

Hodgkins, who appeared in court in a suit and tie with his long black hair tied back in a ponytail, said before his sentencing that he was “remorseful and regretful for my actions.” Speaking calmly and deliberately, he acknowledged trespassing but said he tried “not to contribute to the chaos and erratic behavior that I saw.” 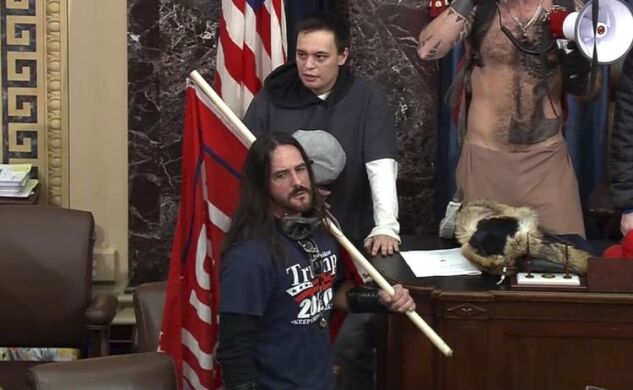 Moss said that Hodgkins and other rioters had caused incalculable damage to U.S. democracy.

“It’s a damage that will persist in this country for decades,” the judge said. “It will be harder for all of us to convince our children and grandchildren that democracy stands as the immutable foundation of our nation.”

The second Capitol riot defendant to be sentenced, Hodgkins is the first to get prison time. In June, an Indiana woman was sentenced to probation after she pleaded guilty to entering the Capitol for about 10 minutes.

Hodgkins was among the rioters who entered the Senate chamber, where he was photographed brandishing a red Trump flag on the dais, a few feet from where the fur-hatted “QAnon shaman” Jacob Chansley was speaking into a megaphone.

The relatively light sentence garnered some criticism from the left. Appearing on MSNBC, Representative , an Arizona Democrat, said Hodgkins “got lucky” and expressed the hope that “other judges would not be as lenient.” A number of progressive commentators pointed out that Black Texans charged with were facing far longer sentences.

Joel Hirschhorn, a Florida criminal defense lawyer not involved in the case, said he thought the sentence could help prod other Capitol riot defendants to plead guilty. “For people who were random people caught up in all the hoopla, it could be a signal that maybe this is the time to get on the bandwagon, bite the bullet,” he said.

Hirschhorn emphasized that eight months was more than a slap on the wrist though, saying it was a substantial sentence for a first-time offender. “For someone who’s never been in jail, eight months is a lifetime,” he said.

In pushing for an 18-month sentence, prosecutors stressed that Hodgkins had entered the Capitol that day with a backpack containing protective eye goggles, rope and white latex gloves.

“He came prepared for confrontation,” prosecutor Mona Sedky said at the sentencing. “He had donned his protective eye goggles before he entered the Senate chamber.” She said a tough sentence for Hodgkins was needed to deter others from “planning a sequel” to the Capitol riot, which she described as an act of domestic terrorism.

Hodgkins’s lawyer, Patrick Leduc, had asked his client be given only probation. He argued in court on Monday that it was “gaslighting the country” to call the Jan. 6 riot a terrorist act when no one had been charged with terrorism. He likened the situation to protests that he said became riots in Portland and Seattle following the death of George Floyd last year.

Unlike many others who stormed the Capitol, Hodgkins was not accused of more serious offenses, such as vandalizing government property or assaulting police officers. The government dropped four misdemeanor counts against him when he agreed to plead guilty to the obstruction charge.

“He did not participate in the physical violence,” Sedky said, “but he surely participated in the grave danger to our democracy.”

But Leduc argued at the hearing that imprisonment would be unnecessarily harsh and cause Hodgkins to lose his construction job and possibly his home. In Florida, the lawyer said, home confinement is a sufficiently tough punishment because the “weather is nice.”

Speaking to reporters after the sentencing, Leduc praised Moss as a “brilliant judge” and said he was satisfied with the eight-month prison term, which will be followed by two years of supervised release.

“The judge’s decision was fair,” the lawyer said. “I have no criticism, no complaint.”

(Updates with reaction to sentence, comment from legal expert)