The defense brings a much simpler pitch to jurors in a Cincinnati courtroom: This is legal, politics as usual, and protected by the US Supreme Court in its 2010 Citizens United v. FEC decision and other precedent. Some legal observers think they could have a case.

“We’ve legalized bribery in our campaign finance system,” said Catherine Turcer, executive director of Common Cause Ohio and a longtime Ohio advocate of campaign finance and government reform. “This case proves we’ve essentially set the stage for Ohioans to be taken advantage of. And they were.”

On Friday prosecutors and defense lawyers for Householder and Borges will winnow down potential jurors in the US District Court for the Southern District of Ohio. Those jurors will sit for six weeks, weighing whether a plan that enriched consultants and put Householder in power is enough to convict these political insiders of a criminal conspiracy.

Federal prosecutors are using a statute designed to take down mobsters, the Racketeer Influenced and Corrupt Organizations Act. But in order to prevail, they have to show the defendants participated in a “racketeering enterprise” through acts that violate state bribery and money laundering statutes—a high hurdle despite many of the facts not being up for debate.

Over the course of several years Householder, Borges, and consultants—Jeffrey Longstreth, Neil Clark, and Juan Cespedes—allegedly took money from FirstEnergy to help get Householder chosen speaker so that he could use his position as one of Ohio’s three most powerful politicians to introduce and pass the bailout legislation.

FirstEnergy said company subsidiaries provided the cash through donations to Generation Now, a 501(c)(4) nonprofit. Generation Now also pleaded guilty. It admits sending that money to other accounts in order to pay consultants, purchase campaign ads for other politicians that would support Householder, and as payments for members of the scheme.

In addition to being named speaker, Householder allegedly received roughly $2 million, including funds to help him settle a lawsuit, make repairs on a Florida vacation home, pay off some credit card debt, and cash for his own campaign expenses and staff.

In one of several recorded phone calls, Borges allegedly called it an “unholy alliance between Larry and FirstEnergy” along with Borges’ own consulting firm. The alliance included those “somehow affiliated directly to FirstEnergy or work for one of their interests,” and those who “just want to suck up to Larry,” he said. 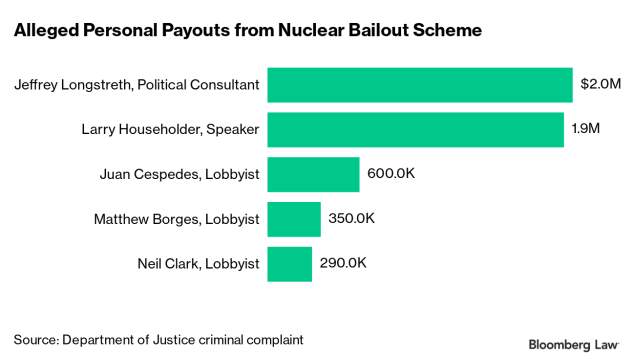 A large portion of the scheme’s spending went to a campaign to thwart a ballot initiative that sought to repeal the subsidies. However, the company’s windfall was short-lived: After the federal indictment of Householder and the ensuing scandal FirstEnergy admitted its role in the alleged scheme, paid a $230 million fine, and the Ohio Legislature repealed the company’s subsidies.

The prosecutors and attorneys for Householder and Borges didn’t respond to requests for comment, but across their briefs a core legal question emerges: Were the deals explicit enough to move these donations out of the realm of normal politics into an illegal quid pro quo?

Householder argues his actions were protected by the First Amendment because the US Supreme Court has declared that political donations are speech, and there’s no explicit agreement in which he traded legislation for cash.

The case is part of a “pattern of federal prosecutors using criminal law to enforce their view of state policymaking,” Householder said in a motion seeking to dismiss the charges, which cites Citizens United—the high court decision reversing longstanding campaign finance restrictions as violating the First Amendment—and other more recent decisions.

The “federal government here oversteps its role in seeking to impose its standards of good government on Ohio,” the Householder motion said. “Even worse, the government does so by alleging that campaign contributions, which are protected by the First Amendment, formed an illegal bribe.”

The bar is high for the government, and continually getting higher, said former Assistant US Attorney Kevin O’Brien, a partner at Ford O’Brien Landy LLP.

“Consistently over the recent era the conservative court has whittled back the power to bring these cases,” said O’Brien, who tried public corruption cases in the Eastern District of New York and served as Chief Counsel to the New York State Commission on Government Integrity. “A supporter of the Supreme Court would say these trials are supposed to be difficult because political activity is important, and we’re not going to criminalize the, ‘I scratch your back if you scratch ours.’ It’s just too close to what is considered protected activity.”

The Supreme Court is currently considering other cases that could limit public corruption investigations. One prosecution of a top aide to former New York Gov. Andrew Cuomo, who worked on his reelection campaign, shares part of the underlying charge—honest services fraud—with the indictment in the Householder case.

Questions from the justices during arguments in that case in November indicated they were skeptical of the prosecutor’s power to bring the case. Like in Ohio, that New York case wasn’t taken up by state prosecutors, leaving Justice Clarence Thomas to caution about federal overreach.

“It seems as though we are using a federal law to impose ethical standards on state activity,” he said.

In the weeks before trial battle lines emerged over the instructions the judge will hand jurors before they make their final decision and dueling expert witnesses each side hopes will persuade the jury of their arguments.

The government retained several experts, including University of Southern California Gould School of Law professor Abby Wood, a “dark money” critic who researches how political nonprofits can provide cover for bribes. After both sides urged the judge to limit what the others’ experts can discuss, the judge issued a ruling paring down the scope of each expert’s testimony.

Burns can’t give his opinion on how nonprofit donations to grease political wheels is a commonplace practice; and he can’t discuss how politicians such as Senate Minority Leader Mitch McConnell run leadership political action committees—nonprofits that support candidates who will vote for McConnell’s leadership position among the party. Wood can’t give her opinion on how nonprofits with unknown donors are “ripe vehicles” for illegal activity.

A yet unresolved question is how much leeway the jurors will be told to give the political insiders. The defendants’ lawyers submitted proposed jury instructions that included a line saying jurors couldn’t convict if Householder received donations to merely “cultivate goodwill or to nurture a relationship” between him and FirstEnergy. Another instruction said the jurors would have to find “an intent to defraud” and that “good faith on the part of the defendant is a complete defense” to one of the alleged offenses.

That jury instruction would acquit the defendants if the jury finds they believed their actions didn’t violate the law, prosecutors said in their pretrial brief, arguing that this “mistake-of-law defense in disguise,” can’t be allowed.

“In effect, they’re arguing everybody does it,” and “we didn’t use the magic words,” David Niven, a University of Cincinnati politics professor said. “If that works, God help us all, because any entity operating with a detectable brain wave will be able to surmount public corruption law by being careful in their choice of words.”

To contact the editors responsible for this story: at ghenderson@bloombergindustry.com; at akramer@bloomberglaw.com