U.S. District Judge , who is presiding over ’s sex-trafficking trial said she didn’t see a legal basis for striking unvaccinated jurors. That decision came weeks before the omicron variant began to appear in the New York area, boosting positive Covid cases. While it is unclear whether all of the jurors selected in the Maxwell trial are vaccinated, at least one woman told the judge during the selection process that she was not currently enrolled in graduate school because of a vaccination policy. Her status may have changed since then.

The judge said Wednesday, before allowing the jury to end its deliberations for the week, that the court is going to require KN-95 masks when they return. “Come Monday, we will have supplies if needed,” she told the jurors. “Please stay safe over the long weekend,” she said. “I want you all here on Monday.” 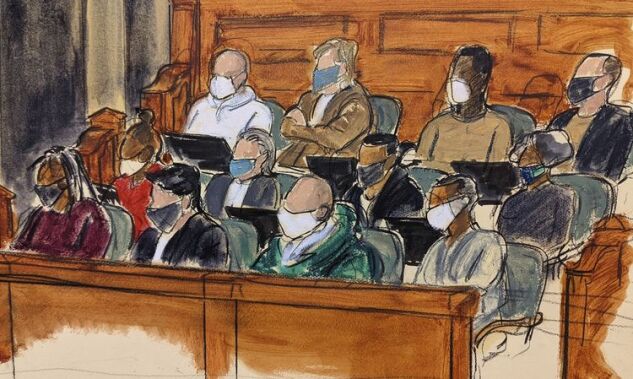 The main jury panel waits to be dismissed after deliberating during Ghislaine Maxwell’s trial in New York, on Dec. 21.
Photographer: Elizabeth Williams/AP Photo

Since jury trials resumed in Manhattan federal court last year, witnesses now testify from plexiglass booths fitted with HEPA filters and jurors no longer deliberate in the usual cramped rooms. Instead, they now hold their discussions in spacious courtrooms that have had jury boxes and benches removed and been retrofitted with wide O-shaped tables that ensure there’s at least six feet (1.8 meters) between jurors.

But other judges have taken the additional step of barring the unvaccinated from serving as jurors, citing the risk it poses to other panel members. “The Constitution accords defendants many a right; the right to infect 16 innocent jurors with Covid-19, however, is not among them,” U.S. District Judge , in Brooklyn, New York, wrote in a Sept. 3 ruling barring unvaccinated jurors over defense objections.

Last month, U.S. District Court Judge in Manhattan excluded an unvaccinated juror in a civil case. She said the juror posed a health risk to other on the panel and expressed concern that “anxiety” about contracting Covid could impact jurors’ ability to be fair.

Such concerns aren’t confined to New York. In Theranos founder ’s criminal trial in San Jose, California, all jurors are fully vaccinated, according to Nicholas Jackson, a spokesman for the federal court there. As in the Maxwell case, the jury is deliberating in a courtroom. During the trial, some jurors sat in two designated gallery rows instead of inside the jury box.

Jackson said both the defense and prosecutors in the Holmes case agreed to go to trial with a vaccinated jury. It’s unclear if any have received booster shots, he said, adding that because deliberations are underway it’s unlikely the court or judge will inquire.

Those judges who’ve allowed unvaccinated jurors haven’t explained their reasoning, but defense lawyers have argued that preventing the unvaccinated from serving could make juries less ethnically and racially diverse, given lower vaccination rates in New York’s communities of color.

Nathan, whom President recently nominated to the federal appellate bench, was actually one of the first judges to deal with Covid’s impact on the courts. When the pandemic began sweeping New York in March 2020, a juror in a trade-sanctions case called to say he wasn’t feeling well. The judge allowed him to deliberate over FaceTime as he self-isolated in his apartment.

Prosecutors objected, saying the man would not be “sequestered” like the other jurors and would also have access to the Internet, but Nathan rejected their arguments. The defendant was convicted hours later.

The Maxwell jury began deliberations on Monday after hearing closing arguments in the trial. The British socialite has pleaded not guilty to charges of luring and grooming underage girls for abuse by her ex-boyfriend, .

Before excusing the jury after its first full day of deliberations on Tuesday, Nathan reminded them of court policy. “In the courthouse masks are required to be worn at all times,” she said, “unless briefly off for eating and drinking.”