“Full House” star and her husband, fashion designer Mossimo Giannulli, gave up a yearlong fight and pleaded guilty in the U.S. college admissions scandal, even as prosecutors announced that a 25th parent would admit guilt in the sprawling case.

After battling charges of fraud conspiracy since they were announced in March 2019, Loughlin and Giannulli agreed this week to change their pleas and serve two and five months in prison. The U.S. agreed to drop charges of federal programs bribery and money laundering.

“Ms. Loughlin, do you understand the possible consequences of your plea this morning?” U.S. District Judge asked by videoconference Friday, referring to the prison time, among other implications.

“Yes, your honor,” she said. Giannulli said the same.

“Do you disagree with anything he says the government would be able to prove?” Gorton asked, referring to Assistant U.S. Attorney Eric Rosen.

Then the clerk asked for their pleas, one at a time. 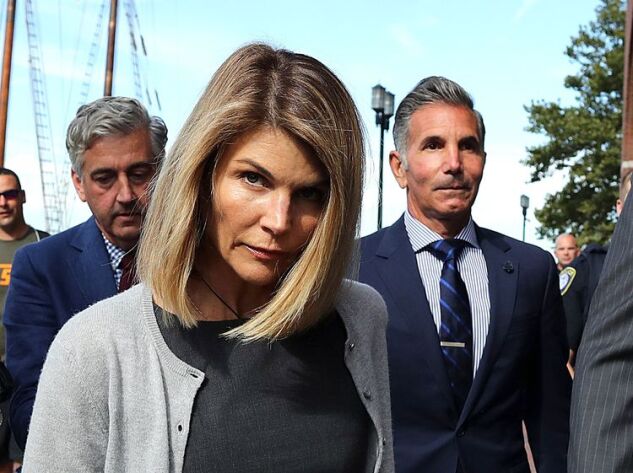 The couple, who arrived together at the federal courthouse in Boston last year and sat side by side at the outset of their fierce defense, made a starkly different appearance at the virtual hearing on Friday. This time, each was seated separately in a Zoom box, accompanied by their lawyers.

Giannulli, who wore a dark suit and a bushy gray beard, sat with attorney , while Loughlin, in a black long-sleeved top and seated beside her lawyer , peered into the camera with a pained expression. Loughlin, 55, looked down several times as Rosen described her crimes.

The couple paid $500,000 in bribes to get their daughters into the as phony crew stars, according to prosecutors, who have now swept up 37 parents in addition to more than a dozen college sports coaches, test administrators and others. Giannulli, 56, agreed to a stiffer sentence because he was more involved in the payments, the U.S. says.

Rosen said Loughlin warned her younger daughter in an email not to talk to her high school guidance counselor about how she was getting into USC as a crew recruit.

“It might be a flag for that weasel,” he quoted her as saying.

After their older daughter was admitted, Rosen said, Giannulli forwarded a $200,000 bill from the scam’s mastermind, William “Rick” Singer, to his financial adviser, writing, “Good news my daughter is in SC ... bad is I had to work the system.”

Both Loughlin and Giannulli told the judge they’d had a high school education.

The case, the biggest college admissions plot the U.S. has ever prosecuted, continues. Shortly after they entered their pleas, prosecutors announced that , a 60-year-old California tech executive, will plead guilty to a fraud conspiracy charge for paying $300,000 in bribes to get his son into as a purported tennis recruit.

In challenging the case, the California couple asked why it was brought by prosecutors in Massachusetts and why they were charged along with dozens of other parents they argued had no connection to them. They recently lost a bid to have the charges dropped over “outrageous government misconduct”; they claimed the U.S. withheld evidence helpful to them.

Their plea agreements allow Loughlin and Giannulli to advance claims of ineffective assistance of counsel and prosecutorial misconduct before the court if more evidence is developed.

“The government seems to be folding their tents with this,” Henning said. “They do get their highest-profile defendant to plead guilty,” but in the end “she could get a minimal amount of time in a federal prison camp.” He called it “a very good disposition for her.”

The couple didn’t lose any ground tactically by fighting the charges, he said, because it gave them time to marshal evidence about the alleged misconduct.

The Massachusetts U.S. attorney’s office rejected Henning’s suggestion that the government is looking to avoid trying the remaining parents, who are scheduled in two groups, in October and January.

“We’re ready for both trials,” said Christina DiIorio-Sterling, a representative for U.S. Attorney .

More than 50 people have been charged in the case. Of the 37 parents, including Dameris, 24 have pleaded guilty. Their sentences have ranged from two weeks for actor to nine months for former Pimco CEO .

Loughlin and Giannulli’s plea agreements leave a dozen parents still facing trial. The first trial, which was to include the couple, was scheduled to start Oct. 5, subject to the court’s reopening. The second, beginning Jan. 11, includes private equity executive .

None of the students or schools, from USC to Georgetown to Yale, were charged.

Gorton said he wants to read pre-sentencing reports for the couple before he accepts or rejects their pleas. He set their next hearing for Aug. 21.

By then some of the hiccups of the virtual courtroom may be worked out, if the proceedings are still by videoconference. On Friday, Loughlin’s lawyer had to work one out himself.

“You’re on mute, your honor,” he told Gorton.

(Updates with details of hearing and analysis throughout)

To contact the reporters on this story:
in Federal Court in Manhattan at pathurtado@bloomberg.net;
in New York at jlawrence62@bloomberg.net