Stephen Bannon in the East Room of the White House on Jan. 22, 2017.
Photographer: Andrew Harrer/Bloomberg

’s longtime lawyer asked to withdraw from his client’s criminal case, one day after Bannon called for the heads of Dr. and FBI Director to be placed on pikes on the White House lawn.

Bannon, a onetime political advisor and ally of President , is facing fraud charges in New York for allegedly diverting money from a charity to build a wall along the U.S.-Mexico border. The lawyer, , has represented Bannon in various matters going back to the special counsel investigation of Russian interference in the 2016 presidential election.

On Friday, Burck filed papers in New York federal court seeking to postpone a hearing scheduled for Monday in the border wall case, saying his firm intends to withdraw as counsel for Bannon and that “Mr. Bannon is in the process of retaining new counsel.” He didn’t give a reason for his withdrawal. The judge agreed to delay the hearing. 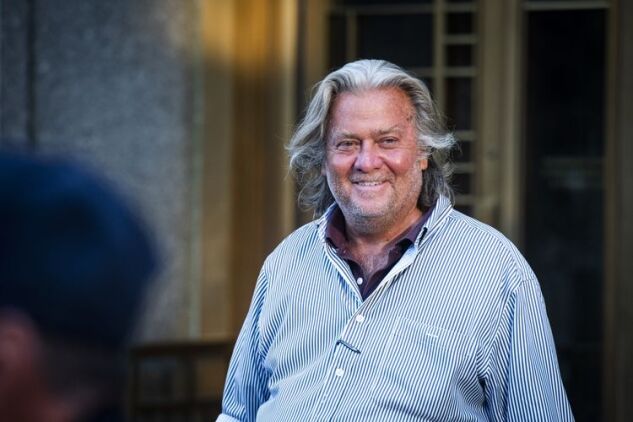 Speaking Thursday on an episode of his online show, “War Room Pandemic,” Bannon called for a public firing of Fauci and Wray if Trump wins re-election. “I actually want to go a step farther,” he said. “I’d put the heads on pikes ... as a warning to federal bureaucrats.”

In response, Twitter said it was permanently suspending Bannon’s account, and Google’s Youtube said it was removing one of his videos and suspending his account for at least a week. Both social media platforms cited corporate policies against speech that incites or glorifies violence.

A former Manhattan federal prosecutor and White House lawyer during the George W. Bush administration, Burck is a senior partner at , with a practice advising and defending major corporations and senior executives. He rose to legal fame as part of the trial team that prosecuted Martha Stewart.

The judge in Bannon’s case, Analisa Torres, had warned the defendants and their lawyers not to comment publicly or on social media about the case, in response to a request from prosecutors. Bannon’s comment about Wray was not specifically related to his prosecution, and the case against him and his co-defendants was handled by inspectors from the U.S. Postal Service, not the FBI.

Still, judges take comments about violence against public officials seriously, particularly after Trump’s ally Roger Stone retweeted a picture of the judge in his criminal case with crosshairs superimposed on it.

(Updates with postponement of scheduled hearing in third paragraph)