The search for an impartial jury in the trial of the White former police officer accused of causing George Floyd’s death will be daunting in a case that dominated news cycles for months and sparked public uproar around the world.

Derek Chauvin faces second-degree murder and manslaughter charges for kneeling on Floyd’s neck for several minutes before the Black man died in Minneapolis in May 2020.

The trial starts Monday with the task of finding 12 jurors who can commit to setting aside their opinions and render a unanimous verdict based solely on what they hear in the courtroom, against a backdrop of the high-profile nature of the case, the daily demands of serving, Covid-19 safety measures, and low trust in the justice system.

“You’re not going to be able to generally find someone who says, ‘I’ve never heard of George Floyd. Who was that?’” said Debbie Hines, a Washington, D.C., trial lawyer and former Baltimore prosecutor. “Just like 25 years ago, ‘I’ve never heard of O.J. Simpson. Is he having a trial or something?’”

These considerations, plus local demographics and socioeconomic conditions of individual jurors, could also influence the effort to find a jury that wouldn’t skew in Chauvin’s favor.

Jury selection for the Chauvin case is meticulous even before the start of voir dire, the process of questioning prospective jurors in the courtroom. The trial will take place at the Hennepin County Government Center in Minneapolis, which is being barricaded behind barbed wire and other fencing.

The Hennepin County District Court in December issued a 16-page questionnaire asking potential jurors about their familiarity with the case, their social media and news consumption habits, their involvement in the demonstrations that followed Floyd’s death, and their experiences with law enforcement, among other issues.

In-person questioning of potential jurors is estimated to last three weeks, with some special precautions to account for the high-profile nature of the case. County residents called for potential service will appear in court for solo questioning, rather than going through the process as a group. Jurors’ identities will be kept private throughout the trial, and the group will be sequestered for deliberation.

The advance questionnaire allows both sides to triage the jury pool and quickly eliminate people who are plainly unfit to serve in the case, said Ken Broda-Bahm, a litigation consultant for Holland & Hart LLP’s Persuasion Strategies.

“And even though it was interminable, it still didn’t work out,” said Medwed, who supported the appeal in an amicus brief.

Lawyers have two standard options for striking potential jurors during the voir dire process: peremptory challenges and challenges for cause.

Peremptory challenges, which don’t require a lawyer to give a reason for striking a juror, are limited. Judge Peter A. Cahill, presiding over the Chauvin case, has given 15 to the defense and nine to the prosecution. Challenges for cause are unlimited.

Using those challenges to assemble a favorable jury is a form of art for trial lawyers. Chauvin’s lawyers will likely try to steer toward jurors poised to dig into technical details about Floyd’s specific cause of death and other issues critical to the defense, while the prosecution will aim for jurors likely to find the video evidence more compelling, Broda-Bahm said.

Potential jurors who’ve expressed strong views on law enforcement or the Black Lives Matter movement could be eliminated in the process, either through the limited number of peremptory challenges, or through challenges for cause if lawyers convince the judge that a person couldn’t review the case fairly, Medwed said.

But those strikes could have a disproportionate effect on prospective jurors who would lean toward conviction, he said. They’re more likely to have spoken out after Floyd’s death, while potential jurors more sympathetic to Chauvin’s side are more likely to have kept their views to themselves—giving a false appearance of impartiality.

Also, someone unaware of the case is likely to raise red flags. “You don’t want the disinterested person who doesn’t want to be there and doesn’t care about the world,” Medwed said.

The trial will likely last several weeks, which presents the possibility that the jury will be sequestered until the case is over. This was a challenge in the O.J. Simpson trial, where the jury spent more time “locked up” than Simpson did, according to LeRoy Pernell, professor of law at Florida Agricultural and Mechanical University.

It’s illegal for lawyers to strike jurors based on race, but Medwed said lawyers often use challenges for cause as a proxy, based on their own potential biases.

“Defense lawyers would probably prefer to have older White people on the jury who might be, based on demographics, more favorable to law enforcement,” he said of the Chauvin case. “You want to craft a jury that you think will support your side and sometimes you use shortcuts based on stereotypes to get there. It’s a really sordid process.”

Between 2005 and 2020, 110 officers were charged with murder or manslaughter following an on-duty shooting, accordingto FiveThirtyEight.com, citing the Henry A. Wallace Police Crime Database. Of the 42 police officers found guilty, only five were convicted of murder. The remaining were convicted of other charges, with the most common offense being manslaughter, according to the publication. 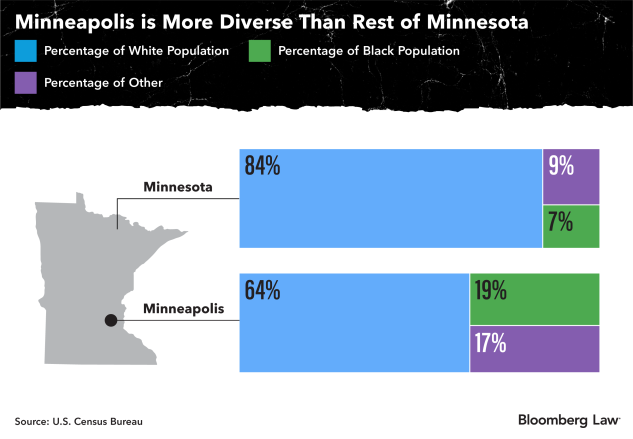 The ideal jury represents a cross-section of the community, but the reality for this case is more complicated, especially with the Covid-19 pandemic disproportionately impacting communities of color.

The questionnaire in the Chauvin case allows potential jurors to list medical reasons and other factors that could affect their ability to serve. Minnesota Attorney General Keith Ellison, who is leading the prosecution, made two unsuccessful requestsfor the court to delay the trial because of “grave risks to public health.”

Black and Latino Minnesotans are testing positive for Covid-19 and being put in intensive care at higher rates than White residents, according to the state’s Department of Health. Communities of color also have increased exposure to the virus because they work in essential jobs that are often underpaid and lack health benefits, the department says.

“That could certainly be a concern that the panel won’t be potentially as diverse as one would hope,” she said, adding that juries already lean White based on Hennepin County demographics. The county is about 70% White, according to U.S. Census numbers.

Nekima Levy Armstrong, civil rights attorney, activist, and executive director of the Wayfinder Foundation, said she expects fewer prospective jurors of color will be able to participate on the jury due to the socioeconomic factors presented by the Covid-19 pandemic. And if there’s a hint that they support Black Lives Matter, that juror will likely be excluded as well, she said.

There’s also a lack of trust among African Americans and people of color with the justice system that may cause some people to opt out of the process, according to Armstrong. “It’s sort of like asking people to believe in the tooth fairy as an adult,” she said.

Whomever is sitting on the jury, they will have to have thick enough skin to sit through painstaking testimony and evidence, and probably watch one or more videos that are “gut-wrenching,” according to Armstrong. “That’s a huge responsibility and a very challenging position to be in,” she said.