The legislation passed 220-204 with support from most House Democrats and three Republicans. Two Democrats voted against the bill.

The House had passed a version of the bill in 2020, but it was never considered in the Senate, where Majority Leader plans to introduce a separate marijuana legalization bill this month.

Still, any move to decriminalize pot faces significant hurdles in the Senate, where many Republicans and some Democrats, including Senators and , oppose such a move, and legislation would require 60 votes to advance.

Advocates argue it is a matter of public health and racial justice.

The House bill “would treat marijuana as a public health issue rather than a criminal matter and would begin to rectify the heavy toll that criminalization has taken, particularly on communities of color and low income communities,” House Judiciary Chair , author of the House bill, said Friday.

The Marijuana Opportunity Reinvestment and Expungement Act would remove marijuana from the schedule of drugs listed in the Controlled Substances Act. It prevents the government from denying an individual federal benefits based on use or possession of marijuana and federal agencies could consider a person’s past or present use of cannabis in deciding on security clearances.

The bill would also create a process to expunge and seal federal marijuana convictions, including pending cases, and vacate eligible existing sentences.

The tax revenue would be used to establish an Opportunity Trust Fund that would be used to aid individuals most harmed earlier enforcement of marijuana prohibitions. A portion would go toward the Small Business Administration to increase access to capital for cannabis-related businesses owned by those with previous convictions.

Pappas said in a statement explaining his vote that he supports decriminalizing marijuana, but the MORE act is “a deeply flawed bill that contains loopholes that would jeopardize public safety.” 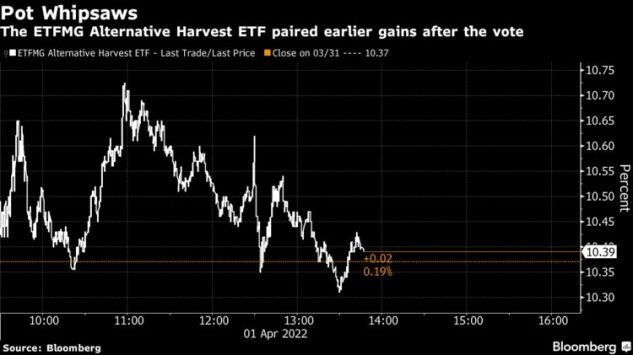 Cannabis stocks whipsawed after the vote as investors attempted to make sense of the results. The ETFMG Alternative Harvest ETF, known by the ticker , spiked initially before pairing gains made earlier in the day. Pot giant slumped as much as 3.5%, weighing on pot stocks after the MJ posted its best month in more than a year.

According to a Joint Committee on Taxation estimate, the bill would increase federal revenues by more than $8 million over 10 years.

Thirty-seven states have decriminalized marijuana for medicinal or recreational adult-use.

“If states are the laboratories of democracy, it is long past time for the federal government to recognize that this experiment in legalization has been a resounding success,” Nadler said.

Republican Representative of Arizona, who voted against the bill, said the MORE Act “doesn’t just federally deschedule marijuana, it incentivizes marijuana use and distribution.”

Biggs argued the bill was “short sighted” and did not adequately consider possible effects.

To contact the reporter on this story:
in Washington at jdillard11@bloomberg.net