A former banker was accused of passing stock tips to a squash buddy, as federal prosecutors unveiled insider-trading charges against nine people, including a onetime member of Congress and an FBI trainee.

The indictment of , 37, who worked at the bank from 2013 until about 2021, was one of four unrelated cases announced Monday in New York. A former vice president at Goldman, Goel passed along information he received about potential mergers to his friend and then split the trading profits, according to prosecutors.

The charges “should send a strong message to anyone who is even thinking about committing insider trading: Cut it out,” , US Attorney for the Southern District of New York, said at a press conference. “Because we’re watching.”

Goldman said it condemns such behavior and is cooperating with the Justice Department and the Securities and Exchange Commission. “The 2017 and 2018 insider trading alleged by the government is egregious conduct,” the bank said in a statement.

The firm has seen several former employees charged with insider trading. In 2019, after a trio of charges against people who had worked at Goldman over just 18 months, the firm’s investment-banking co-heads put out a note to staff reminding them of the reputation hit suffered by the bank because of such actions.

After leaving Goldman, Goel went to work at The company said in a statement that “upon learning of the allegations for the first time this morning, Mr. Goel was immediately placed on indefinite leave.”

Prosecutors allege Goel passed along information from the bank’s Firmwide Capital Committee. The confidential committee emails contained details and analysis of mergers the bank was considering financing or deals in which it was acting as a financial adviser.

In one instance, the US said, when Goel received an email about a potential takeover target for EQT Partners Inc., he texted his friend, “Let’s play Squash after work,” and that evening suggested that his friend buy call options in the target company. The next day, he asked by text, “Did you book the court?” Prosecutors claim this was his “coded way of asking” whether his alleged co-conspirator had purchased call options.

The SEC said Goel passed tips to a foreign exchange trader and longtime friend named Akshay Niranjan, 33, with whom he often played squash and who is a defendant in the civil case. According to the SEC complaint, Goel and Niranjan met as graduate business students in California and moved to New York together in 2013. In addition to their squash games, they frequently took overseas trips together and, at times, lived in the same apartment building, the regulator said.

Goel is also charged with obstruction of justice for allegedly destroying evidence and directing his friends to do the same. The recipient of Goel’s tips recorded meetings last month in which they discussed coordinating their story to law enforcement and deleting messages related to the alleged scheme, according to court documents.

For all the elaborate maneuvering the government alleges, the two don’t appear to have scored big sums. The SEC alleges that they made $291,735 from the scheme, including one trade that netted them no profits and another that earned them just $600. The vast majority of their profits, $250,235, came from a single trade on Calgon Carbon before it was acquired by Kuraray in 2017, according to the regulator.

, head of the SEC’s enforcement division, said at the news conference that the regulator will “use all of our expertise and all of our data analytic tools” to “find you and to hold you accountable.” 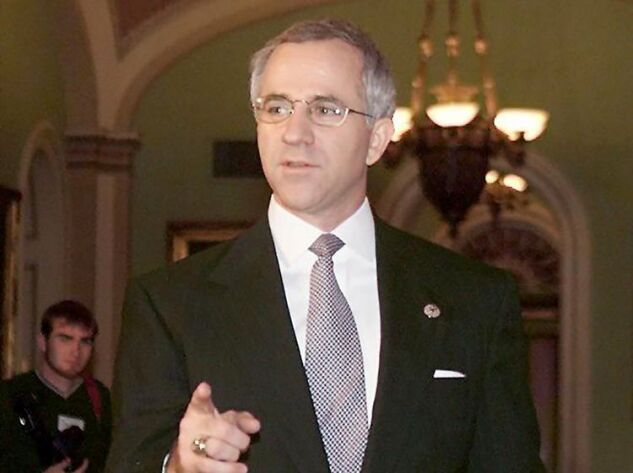 Stephen Buyer at the US Capitol in Washington, D.C. in 1999.
Photographer: Luke Frazza/AFP/Getty Images

Among the others charged in the four separate cases is former Republican Congressman Stephen Buyer, who represented Indiana from 1993 to 2011. Buyer, 63, is accused of taking confidential information from two of his consulting business’s clients and trading on it.

Prosecutors allege he traded on it first in 2018 while working for T-Mobile US, when he learned that it planned to acquire Sprint, and then the next year when he learned that his client Guidehouse LLP was going to purchase Navigant Consulting. The government said he earned profits of at least $349,000.

The US said one of the accounts that Buyer used to trade was shared with a relative who lost hundreds of thousands of dollars on an investment Buyer had led the relative to make. He is also accused of sending himself reports on the companies and notes to himself to make it look like he was researching the stocks, and of lying to investigators probing the trades.

“Congressman Buyer is innocent,” Andrew Goldstein, a partner at Cooley LLP who is representing Buyer, said in a statement. “His stock trades were lawful. He looks forward to being quickly vindicated.”

Prosecutors also named Seth Markin, who they say was a agent trainee when he made more than $1.4 million in 2021 after he “stole” inside information from his then girlfriend, at the time an associate “at a major law firm in Washington DC.”

Markin is accused of looking through his girlfriend’s confidential work documents without her permission and finding out that Merck & Co. was going to acquire Pandion Therapeutics, a biotech company, for about three times the value of Pandion’s share price. Prosecutors said Markin passed on the tip to his close friend, Brandon Wong, who bought hundreds of thousands of dollars of shares of Pandion based on the information and told others, including friends and family.

Markin and Wong pleaded not guilty during an appearance in magistrate court in Manhattan on Monday and will be released on bail pending an Aug. 24 court appearance. Their lawyers declined to comment on the charges after the hearing.

Michael Brodack, who heads the FBI’s criminal division in New York, said at the news conference that although the specifics vary, the four cases have one thing in common: They all involve people “whose greed led them to make trades” based on material, nonpublic information.

“The crimes we allege here today are serious ones that threaten both the integrity of our financial markets and investors faith on them,” Brodack said.