The Justice Department plans to pursue more individuals involved in white-collar crime, as prosecutors look to roll back the Trump administration’s lighter-touch approach to oversight.

“Accountability starts with the individuals responsible for criminal conduct,” Deputy Attorney General said in a speech Thursday to an American Bar Association forum. “We will urge prosecutors to be bold in holding accountable those who commit criminal conduct.” 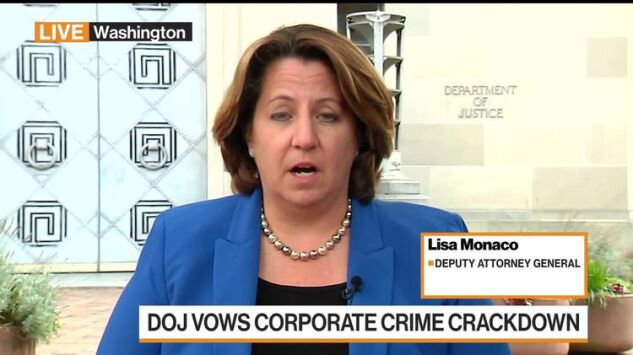 The changes will encourage more cases against senior executives, who have traditionally been pursued less vigorously than their employees.

Monaco described a package of policy changes the Justice Department is making, representing one of the boldest efforts by President ’s administration to crack down on corporate crime.

Under the new approach, Monaco said it will no longer be sufficient for companies seeking credit for cooperation to limit disclosures to those they assess to be “substantially involved” in the misconduct.

“Such distinctions are confusing in practice and afford companies too much discretion in deciding who should and should not be disclosed to the government,” Monaco said. “Cooperating companies will now be required to provide the government with all nonprivileged information about individual wrongdoing.”

Prosecutors also will now consider the “full range” of prior misconduct by a company, Monaco said. And previous guidance discouraging the appointment of independent monitors to police firms will be rescinded.

Monaco also said the department is studying whether companies are abiding by deferred-prosecution and non-prosecution agreements.

“Where they do not live up to their obligations, we will hold them accountable,” Monaco said later in the day in an interview on Bloomberg Television’s “The Close.”

“We cannot have a system in which corporations believe they can enter into a resolution with the government and it’s simply written off as the cost of doing business,” she said. “That cannot be the system.”

and have been told recently that they are in breach of agreements made with U.S. prosecutors.

In a reference in her speech to those companies, which she didn’t mention by name, Monaco said that “recently, two different multinational corporations separately announced that each had received a breach notification from the Justice Department. This is obviously not a step we take lightly, but we will do so where necessary and appropriate.”

In response to a question, Monaco said the new policies were developed by talking with department prosecutors. “We need to invigorate and double down and, frankly, assist our prosecutors in doing the great work they are already doing,” she said.

Monaco said in the speech that “prosecutors have always had to grapple with the evolution in corporate fraud” whether it’s “the junk bond firms of the 1980s, the various fraud schemes created by the so-called ‘smartest guys in the room’ at Enron, or the prolific mortgage fraud of the 2000s, or cryptocurrency schemes today.”

(Updates with comments from interview in ninth paragraph)

To contact the editors responsible for this story:
at tmetcalf7@bloomberg.net