In mid-March, as threatened vulnerable prison populations in the Netherlands, 200 nonviolent inmates nearing the end of their sentences were released with electronic monitoring equipment. “We heard the news on a Saturday, and by Tuesday all the prisoners had bracelets,” says Eric Staal, policy adviser for Dutch probation services. They had enough for the discharged convicts, but to ensure a steady supply, the Ministry of Justice and Security purchased 1,500 additional bracelets from , a leading manufacturer.

The coronavirus has decimated many businesses, but electronic monitoring (EM) makers are thriving. Governments around the world are releasing record numbers of prisoners out of concern that the pandemic poses undue risks to inmates’ health; there are about 25% to 30% more prisoners wearing bracelets now than a few months ago, according to Bloomberg Businessweek estimates. The companies are betting that this can be a test run for a longer-term shift in sentencing. Criminal justice reformers say they’re worried about an added layer of surveillance in a field that’s been .

“Coronavirus gives electronic monitoring companies an opportunity like they’ve never had before to expand,” says James Kilgore, director of the U.S.-based parole reform project Challenging E-Carceration. (He spent more than six years in California prisons—and was subsequently on a monitor—for his role in the Symbionese Liberation Army, which staged kidnappings and bank robberies in the 1970s.) Kilgore adds that newer monitoring equipment tracks data such as biometrics, consumer habits, and health issues, though it’s not clear what the companies are doing with the information.

European Union nations have put thousands of nonviolent offenders on monitoring equipment since the pandemic began—about 3,400 in Spain and 1,000 in Italy, for example—and in the U.S., the Federal Bureau of Prisons has placed about 4,600 inmates in home confinement, a 160% increase since the end of March. States such as Wisconsin have outfitted almost 1,500 inmates with bracelets, while Cook County in Illinois plans to add 700; in New York and New Jersey, the numbers are about 150 each.

“Demand has spiked everywhere,” says Robert Murnock, vice president for partnership development at BI Inc., a monitoring-equipment maker in Boulder, Colo. Like some other manufacturers, he wouldn’t elaborate on his clientele because of confidentiality agreements, but he says BI now has 1,300 U.S. accounts. “We’re getting calls from different jurisdictions and other countries we’ve never worked with,” Murnock says. 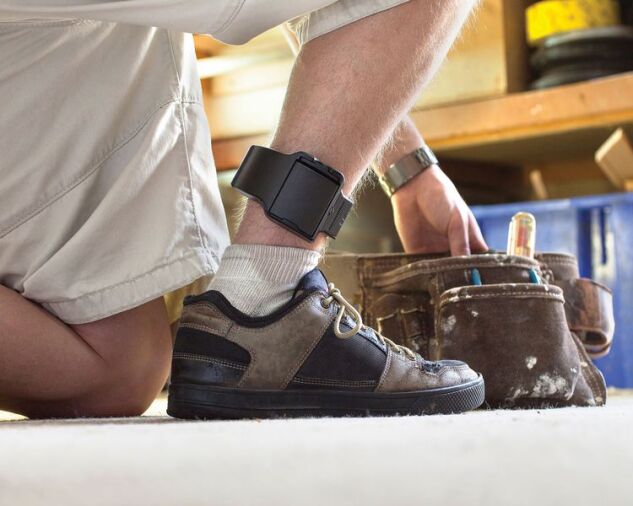 An ankle monitor made by BI Inc.
Photographer: Russell McDougal

Typically, an inmate is fitted with an ankle bracelet that uses either GPS, which lets wearers travel to preapproved locations, or radio frequency, for when they’re mostly confined to home. If someone leaves a specified area, a monitoring center alerts law enforcement. The bracelets that Attenti supplied to the Dutch cost about €2,000 ($2,300) each, according to the ministry, and that’s just for the hardware—not the costs associated with monitoring software or the probation and parole officers who check up on people. (Attenti didn’t respond to a request for comment.) In the U.S., it costs about $100 a day to house a federal prisoner, according to the , and about $140 for a state prisoner, according to the , a think tank in Brooklyn, N.Y. A majority of EU countries pay €100 or less, a report by the shows.

Research demonstrates that EM can lower criminal justice costs, decrease prison populations, and reduce recidivism. But prisoners are often expected to pay costs, which can run from $10 to $35 daily, depending on the state, according to academic studies and media reports; it’s unclear if rates have been affected by the surge of prisoners being released amid the pandemic.

The costs can have devastating financial effects. In a 2018 federal class-action lawsuit against Alameda County in California and monitoring company , Robert Jackson, one of three lead plaintiffs, called his payments “extortion.” Jackson was released with a bracelet to care for his three daughters after his wife died. A forklift operator, he paid the company $4,500 for 113 days of monitoring. In the suit, he said that he didn’t ask for a fee reduction because he was worried he’d be sent back to jail. He said that LCA routinely called to harass him about being behind on payments and that the fees cost him his house, which caused him to have to find alternative custodians for his children. (A county spokesperson didn’t return a request for comment. , president of the Americas for , the Israeli company that now owns LCA, says, “We believe the multiple dismissals from the court speak for themselves,” in reference to parts of the class action that a judge dismissed. Other parts are being appealed.)

Faulty equipment is also an and can land inmates back in prison. When bracelets don’t charge properly, they can’t keep tabs on people; at that point, alarms sound in monitoring centers, police are dispatched, and wearers can be accused of violating their release conditions. In Los Angeles County, one in four GPS devices were found to be faulty, according to a 2013 state probation audit.

Critics say that the swift expansion in EM hasn’t come with an equal uptick in the housing, counseling, and employment services required to ensure that the system operates responsibly. Dutch consultant Michiel van der Veen, who advises governments on how to employ monitoring programs, says vendors need to better understand what they’re selling. They’ve “never been interested in how the material is used,” he says. “There are no guidelines.” BI’s Murnock says: “If agencies request a device, we will get it to them. Our job is not to determine what corrections does with the equipment.”

Some corrections officials who run EM programs say they were overtaxed before the pandemic and are even more so now. In Cook County, Sheriff wrote to state criminal justice stakeholders saying that he doesn’t have the resources to keep up with the surge in monitored prisoners. “We have been at, or exceeding, capacity” for some time, he said.

Businesses that sell monitoring equipment offer other services to prisons, too. Critics object to such entanglements, saying they put unfair financial burdens on inmates and their families. , which owns monitoring company , provides phone services. It was accused of charging 100 times the normal market rate for inmate calls, and in 2016 San Diego County inmates Juan Romero and Frank Tiscareno were lead plaintiffs in a class-action suit against Securus alleging that the company illegally recorded their private calls. (Securus settled the Romero and Tiscareno case without admitting wrongdoing. A Securus spokeswoman says: “Our monitoring technology has helped some jurisdictions move more people out of correctional facilities and back into their communities while maintaining public safety. We have also provided nearly 20 million free calls to help keep families connected.”)

Monitoring companies sometimes have political connections, and those relationships can raise questions. The , a public interest law firm in Arlington, Va., filed a suit in May against Judge of the Orleans Parish Criminal District Court in New Orleans for ordering defendants to wear bracelets and pay more than $1,000 to ETOH Monitoring LLC. Company executives contributed to Bonin’s election campaign, and he’s had long-standing personal and professional ties to them, the suit alleges. “Judge Bonin violated the 14th Amendment’s guarantee of due process by requiring defendants to pay fees to a company he had a relationship with,” says Jaba Tsitsuashvili, an institute attorney. “Private electronic monitoring companies must be held to constitutional standards when they perform governmental functions.” (Bonin and ETOH didn’t reply to requests for comment.)

Back in the Netherlands, Staal, the probation services policy adviser, says the country plans to use bracelets with prisoners or pretrial detainees as long as the coronavirus is a threat. “For the foreseeable future, prison systems may depend on location monitoring,” he says. “Electronic bracelets are the best tool we have.”

To contact the author of this story:
in New York at tabachnick@gmail.com

To contact the editor responsible for this story:
at bbegun@bloomberg.net