President Donald Trump’s former lawyer pleaded guilty to lying to Congress about Trump’s plans for a real-estate project in Moscow in 2016, taking Special Counsel Robert Mueller’s probe into the heart of Trump’s relationship with Russia at the height of the election.

Entering his plea in a hastily convened hearing in New York federal court Nov. 29, Michael Cohen said he made false statements to Senate intelligence committee members in August 2017 in order to be consistent with Trump’s repeated public disavowals of any Russian business ties. Under the deal, Cohen agreed to cooperate with Mueller’s investigation.

Cohen, 52, had told the Senate, which was probing Russia’s meddling in the election, that Trump’s project had been scrapped in January 2016. On Nov. 29, Cohen admitted that was a lie: Negotiations on a Trump tower in Moscow had in fact continued through June of that year, he said. Cohen had more extensive communications about the deal with Trump and others in the Trump Organization than he’d disclosed to lawmakers, he now admits, adding that he talked to Trump about traveling to Russia for the project, a trip that didn’t ultimately materialize.

That means the Trump Organization was continuing to pursue a business opportunity in Moscow deep into Trump’s run for president, even after he had secured the Republican nomination and publicly denied having any business with Russia. The deal remained live at a time when Russians were seeking to make multiple inroads into the Trump’s campaign and had, according to Mueller, began social media and hacking efforts to benefit Trump’s candidacy.

On Nov. 29, both Trump and his personal lawyer, Rudy Giuliani, said Cohen is lying to reduce his sentence. “This is a weak person and not a very smart person,” Trump told reporters Nov. 29.

Cohen’s plea admissions don’t speak directly to possible collusion between Trump’s campaign and Russia’s interference in the 2016 election, which is the main focus of Mueller’s probe. However, they contradict Trump’s public statements and hint strongly that Trump sought to conceal his business interests in Russia.

Cohen, appearing in a packed fourth-floor courtroom, said he had discussed the real-estate deal with members of the Trump Organization after January 2016 -- and briefed Trump more than the three times that he’d disclosed to lawmakers. Contradicting what he’d previously told lawmakers, Cohen also said he briefed members of Trump’s family, without identifying them, on the Moscow deal.

Cohen made his plea before U.S. District Judge Andrew Carter and departed without speaking, accompanied by his lawyers, wading through a scrum of journalists before getting into a waiting car.

Until now, Cohen had been operating without a formal cooperation deal. He pleaded guilty earlier this year to campaign finance and tax violations, the result of a probe into Cohen’s business dealings that was referred by Mueller’s team to federal prosecutors in New York. Following his plea, Cohen spent dozens of hours providing testimony to Mueller’s investigators and other federal officials. He first met with Mueller’s office on Aug. 7 in a so-called proffer session, and he had six more debriefings, according to his plea agreement.

Cohen has been scheduled to be sentenced in the earlier matter on Dec. 12, a fast turnaround that suggests Mueller may already have what he needs from the lawyer. Underscoring the possible strength of the testimony he’s now provided, Cohen’s lawyer, Guy Petrillo, says he will seek a sentence of time served for his client. Cohen faces as much as five years in prison and a maximum $250,000 fine for the charge. 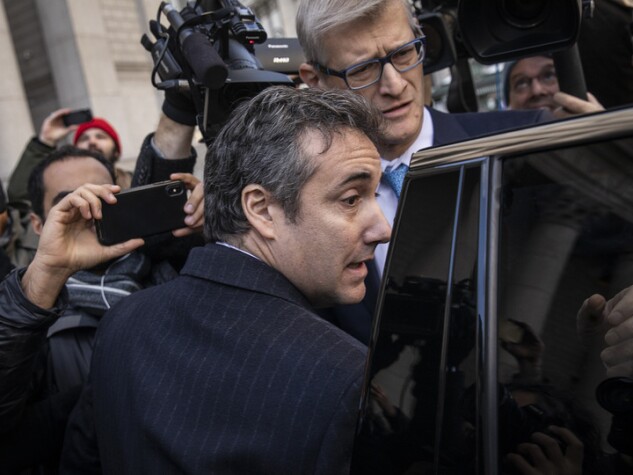 Cohen told the court he lied to Congress about Trump’s Moscow tower proposal in order to be consistent with his former boss’s political positions during the campaign. Trump has acknowledged some limited business with Russia and Russians in the past: He sold an estate to a wealthy Russian and held the Miss America pageant in Moscow in 2013, but otherwise, “I have nothing to do with Russia,” he told NBC News last year.

The Trump Organization began weighing the idea of developing a building in Moscow in September 2015, Cohen told the House intelligence committee last year, and it signed a letter of intent the next month with Moscow-based I.C. Expert Investment Company. Felix Sater, a Russian-born developer and U.S. citizen, served a deal broker on the Moscow project.

Sater, who had worked with Trump on a development in Manhattan and served time in prison for assault, said he lined up financing for the deal with VTB Bank, a Russian bank that was under American sanctions, the New York Times reported last year. The bank has denied such involvement.

In January 2016, Cohen sent an email to Dmitry Peskov, the press secretary for Russian President Vladimir Putin, hoping to expedite approvals for the project, according to emails submitted to Congress. Cohen told the Senate committee that he didn’t recall receiving any response and that he decided to abandon the project shortly thereafter.

But according to Cohen’s plea documents, he did in fact receive a response from Peskov’s office -- in which an assistant asked questions and promised to follow up with others in Russia. Cohen also says he agreed to travel to Russia in connection with the project and, months after he initially claimed the talks died, took additional steps to arrange for a possible trip to Russia by Trump.

Neither trip took place. “I did not in fact travel there nor have I ever been to Russia,” Cohen said Nov. 29.

The timeline laid out by Cohen overlaps with other events being probed by Mueller. In June 2016, members of Trump’s campaign committee held a now-infamous meeting in Trump Tower with a Russian lawyer who they were told would deliver “dirt” on Democratic candidate Hillary Clinton.

Trump’s open admiration of Putin has invited speculation among his critics that it’s related to secret financial interests he has there. Trump has issued repeated denials. “I HAVE NOTHING TO DO WITH RUSSIA - NO DEALS, NO LOANS, NO NOTHING!” he wrote on Twitter in January 2017, shortly before he was inaugurated.

Trump continued bashing the Mueller probe Nov. 29, writing on Twitter: “When will this illegal Joseph McCarthy-style Witch Hunt, one that has shattered so many innocent lives, ever end-or will it just go on forever?”

With assistance from David Glovin, David Voreacos and Andrew Harris

To contact the editors responsible for this story: Jeffrey D Grocott at jgrocott2@bloomberg.net Andrew Martin