Former White House strategist vowed to fight a New York state case accusing him of defrauding thousands of contributors to a privately funded US-Mexico border wall of more than $15 million.

Bannon pleaded not guilty Thursday to money-laundering, fraud and conspiracy charges after walking into a Lower Manhattan courtroom in handcuffs. He was released on his own recognizance after turning over his passport. 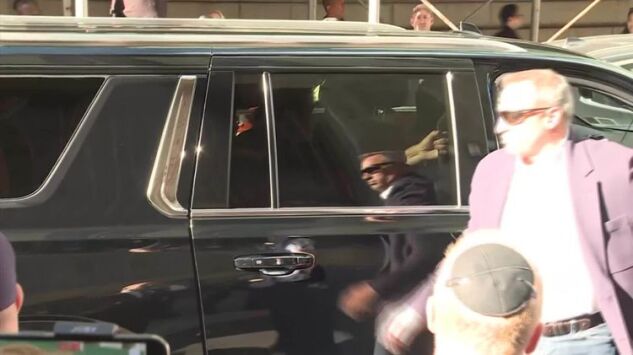 WATCH: Bannon arrives at a courthouse in lower Manhattan.

The charges relate to Bannon’s involvement in We Build the Wall, a group that privately funded about five miles (eight kilometers) of border fencing in two locations in Texas and New Mexico. Bannon was charged in August 2020 in a similar case by federal prosecutors, but he was pardoned by on his last day in president.

A presidential pardon only applies to federal rather than state crimes, though.

Appearing outside the courthouse after the Thursday arraignment, Bannon defiantly raised the earlier case, saying the “administrative state” was trying to “take him out” just before Election Day, like they had in 2020.

We Build the Wall launched its initial GoFundMe campaign in 2018, saying it would help Trump fulfill a signature 2016 campaign promise to build a border wall, though Trump had claimed that Mexico would pay for it. In its solicitations, the group stressed that 100% of the money donated would go toward construction, with its founders receiving no compensation.

In reality, Bannon “stole millions of dollars to line his own pocket,” New York Attorney General said Thursday in a joint press conference with Manhattan District Attorney . Their two offices are cooperating in the case.

“It is a crime to turn a profit by lying to donors, and in New York, you will be held accountable,” Bragg said in an earlier statement. “As alleged, Stephen Bannon acted as the architect of a multi-million dollar scheme to defraud thousands of donors across the country – including hundreds of Manhattan residents.”

“There cannot be one set of rules for everyday people and another for the wealthy and powerful — we all must play by the same rules and must obey the law,” James said in a statement released before the press conference.

Bannon by federal prosecutors in 2020 of defrauding donors by claiming the group was run by volunteers, even as he allegedly took more than $1 million from the fund in part to pay personal expenses.

Three other men were also charged with fraud by federal prosecutors but didn’t receive pardons. Two pleaded guilty and one went to trial, which resulted in a hung jury in June.

One of the two men who pleaded guilty in the federal case, “We Build the Wall” founder Brian Kolfage, admitted taking hundreds of thousands of dollars in funds raised by the effort.

The New York indictment details several transfers Bannon allegedly made of “We Build the Wall” funds to a non-profit he controlled. Bannon then forwarded a portion of the money to Kolfage or other entities that benefited Kolfage, the district attorney’s office alleges. In one example, Bannon allegedly moved $250,000 to his non-profit, then transferred $100,000 of that to Kolfage.

James at the Thursday press conference said it was correct to infer that Bannon kept the difference between the two amounts.

The New York case comes as Bannon is awaiting sentencing in another matter. A federal jury in Washington in July of contempt of Congress for defying a subpoena from the House committee investigating the Jan. 6 attack on the Capitol. His lawyers said they will appeal that decision.

Outside the courthouse after the arraignment, Bannon, who now hosts a daily podcast, said he was leading a grassroots movement that would result in a landslide victory at all levels of state and local government in the November midterms.

“We are not going to back down, and they will not be able to shut me up,” he said.

Kevin O’Brien, a former federal prosecutor, predicted Bannon would continue to argue that the New York case was vindictive and driven by political bias.

“There may in fact be some truth to this claim,” said O’Brien. “Arguably, scarce prosecutorial resources in New York could have been far better spent, but it falls short of a viable defense to the legal charges against Bannon.”

To contact the reporters on this story:
in New York at gregfarrell@bloomberg.net;
in federal court in Manhattan at rvanvoris@bloomberg.net