Celebrity lawyer , who goes on trial Monday in New York on charges that he tried to extort millions of dollars from , will be allowed to tell jurors about the two people who helped make him famous -- and , a judge ruled.

At the same time, prosecutors won’t be allowed to mention damaging details about how Avenatti allegedly fell $15 million into debt, which they had hoped to point to as a motive for him to demand as much as $25 million from Nike. The U.S. claims he illegally threatened to hold a press conference announcing allegations that the athletic apparel giant made improper payments to high school basketball players if it didn’t pay.

The rulings Wednesday by U.S. District Judge in Manhattan are major victories for Avenatti after a week of bad news, including for bail violations in California and being while awaiting trial in New York. Mentioning Trump at trial could help Avenatti suggest his prosecution is motivated by his outspoken criticism of the president, a contention prosecutors had hoped to counter by raising his dire financial situation.

Avenatti’s lawsuit against Trump on behalf of adult-film actress Daniels, whose real name is Stephanie Clifford, gave him a national spotlight that he used to become an outspoken critic of the president. Prosecutors had sought to bar Avenatti’s lawyer from mentioning either Clifford or Trump in his opening statement to jurors, saying they were “deeply troubled” by the idea of politics being “injected into this case.” 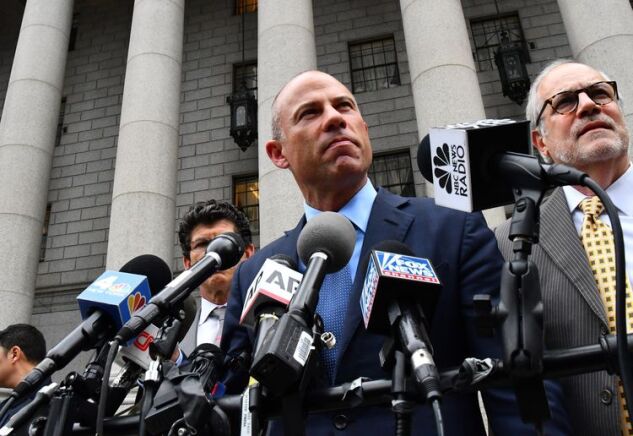 Michael Avenatti speaks with members of the media outside federal court in New York on May 28, 2019.
Photographer: Louis Lanzano/Bloomberg

But Gardephe said the fame Avenatti achieved from his work for Clifford was relevant to the case because it gave him the clout necessary to allegedly threaten Nike with a damaging scandal if the company didn’t pay up.

The Trump case “drove the conduct of everyone involved,” Gardephe said. Jurors shouldn’t be expected to “take my word for it” about why Avenatti, 48, had such a large public following. The prosecutor had claimed he didn’t know why Avenatti was famous.

Going into detail on Avenatti’s debts, on the other hand, risked biasing the jurors against him, Gardephe said. The judge put restrictions on the government’s plan to introduce evidence that Avenatti owed money to former law partners and clients, and was also delinquent in spousal and child-support payments, when he allegedly tried to extort money from Nike. He said they could raise but not elaborate on several multimillion-dollar judgments against Avenatti.

The judge said the debt was not highly relevant to the charges. “That powerful motive exists whether or not Mr. Avenatti was in debt,” Gardephe said. “That is ultimately not what this trial is about.”

Not all of Gardephe’s rulings on Wednesday favored Avenatti. The judge shot down his request to delay the trial another week and said he couldn’t tell jurors about allegations of unethical conduct by Nike’s law firm in an unrelated matter.

Avenatti, wearing a drab, short-sleeved, jail-issued jumpsuit and orange slip-on shoes, spoke quietly with his lawyers during breaks in the hearing and didn’t address the judge.

He had complained about being held in solitary at the Metropolitan Correctional Center in New York. In a letter explaining the housing assignment, MCC Warden M. Licon-Vitale said the administration had “serious concerns for Mr. Avenatti’s safety, should he be placed in a general population housing unit.”

The following two sentences in the letter are blacked out.

The Nike trial, originally scheduled to begin Jan. 21, was postponed following Avenatti’s arrest last week in California, where he is facing a separate federal prosecution alleging he stole money from clients. His bail was revoked after prosecutors said he was engaging in fraudulent transactions to hide money from creditors.

Avenatti is also facing separate charges in New York that he stole $300,000 from a book advance for Daniels.