The EEOC seal is displayed on a window at the headquarters in Washington, D.C.
Photographer: Andrew Harrer/Bloomberg via Getty Images

An increasing number of workers are accusing their employers of discriminating against them based on their mental health conditions, a change fueled largely by rising numbers of bias charges based on anxiety and post-traumatic stress disorder, according to the EEOC.

Accusations of mental health discrimination accounted for about 30% of Americans with Disabilities Act-related charges in fiscal year 2021, according to newly released statistics from the U.S. Equal Employment Opportunity Commission. That’s an increase from the 20% reported in FY 2010.

Meanwhile, depression and bipolar disorder charges made up 7.5% and 2.7% of ADA claims in FY 2021, respectively. Those percentages have remained generally consistent for the past two decades. 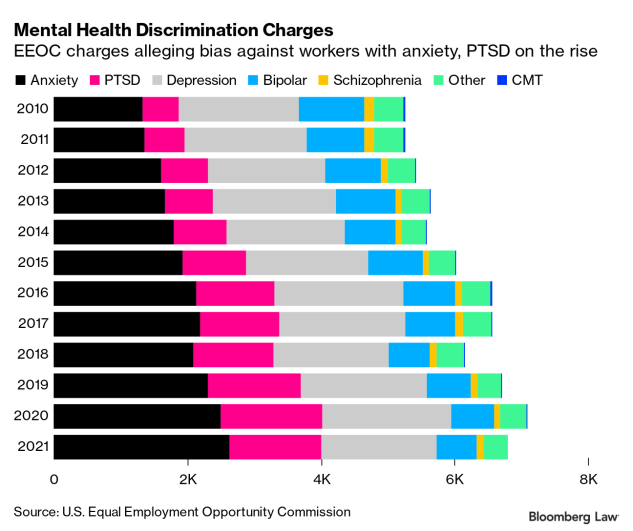 The EEOC, which enforces the ADA in the workplace, acknowledged in its pandemic guidance that employees with pre-existing mental health conditions may have a harder time adjusting to life—and work—during a public health crisis.

The EEOC should do more to educate workers about their rights and employers about their obligations to make accommodations, said Lewis Bossing, a senior staff attorney at the Judge David L. Bazelon Center for Mental Health Law, a Washington-based advocacy organization.

“This isn’t something the EEOC shouldn’t have seen happening; they kind of predicted it in 2020 when they issued that guidance,” Bossing said. “It seems to me that maybe the EEOC needs to get in the game.”

The agency is “working to expand our outreach efforts and resources in this area to help ensure employers, employees and mental health providers understand the employee’s rights under the ADA,” EEOC Chair Charlotte Burrows said in a statement.

Republican Commissioner Andrea Lucas, in a separate statement, said the EEOC should focus on “education, outreach, and updated guidance.”

“This should be a bipartisan issue,” she said.

Rachel Berlin Benjamin, an Atlanta-based plaintiffs’ attorney with Hall & Lampros LPP, said she’s seen the surge in mental health-related discrimination cases firsthand in the past two years. Often it starts with a mental health breakdown at work, followed by termination.

“In all of these cases, employers have rushed to judgment and fired my clients because of their perception that my clients can’t perform the job,” Berlin Benjamin said, calling it a “clear violation” of the ADA.

The EEOC has sued companies for discriminating against people with mental illnesses at least twice in the past year.

In December, the EEOC sued Milner, Ga.-based fabrication company Ranew’s Management Co. for allegedly terminating its chief financial officer after he asked for leave for severe depression. Two months later, the company settled for $250,000 and agreed to update its policies.

Dragon Rig Sales and Service LLC, a Beaumont, Texas-based industrial equipment and services company, faced an EEOC lawsuit in August 2021 for refusing to hire someone who was taking medications to treat anxiety and opioid addiction. At the time, the EEOC’s Houston District Director Rayford O. Irvin said in a statement that “enforcement of the ADA is a top priority of this agency.”

Employers can have a hard time seeing those conditions on the same plane as other disabilities, said Brian Sutherland, also an attorney at Hall & Lampros.

Sutherland in 2018 represented a 9-1-1 dispatcher who was fired after taking medication to treat bipolar disorder and PTSD and requested temporary leave while being treated in a psychiatric hospital. A federal jury found that the termination violated the ADA and the Family and Medical Leave Act and awarded the employee $622,000.

“A person who experiences anxiety or depression has a disability under the law just like somebody who has a wheelchair or visual impairment,” Sutherland said. “That’s not always as obvious to the employer.”

Atoyia S. Harris, an employment law counsel at Proskauer Rose LLP, said she’s seen an uptick in clients seeking advice on accommodating employees with mental health conditions. That increase is likely linked to both the pandemic and the lessened stigma around mental health, she said.

“Particularly when it comes to mental health conditions, there’s really no one-size-fits all solution,” Harris said. She advises clients to train their human resources teams and supervisors on mitigating accommodation concerns.

The EEOC has slightly conflicting guidance on remote work as a form of ADA accommodation, said Nicole Eichberger, a partner at Proskauer.

“When we look at those factors, they aren’t so clear on helping employers make these decisions,” Eichberger said.

— With assistance from Shira Stein

To contact the reporter on this story: at jmorenodelangel@bloombergindustry.com