Courtroom from behind a witness stand.
Spencer Weiner-Pool/Getty Images

The growing number of states embracing the creation of state “solicitors general” could give female attorneys a chance to get their feet in the door of the insular world of Supreme Court practice.

Not only can it lead to experience in the Supreme Court itself, but it “can also open doors for oral argument experience in state high courts and lower federal appellate courts earlier and more often than in private practice,” West Virginia Solicitor General Lindsay See told Bloomberg Law.

As solicitor general of West Virginia, See said she’s taken on a level of responsibility that is years ahead of what she would have been able to do in private practice.

In December, See made one of just 17 appearances by women at the Supreme Court so far this term. Men have made 95.

There “has been a recent uptick of women in the role of solicitor general,” said D.C., Solicitor General Loren L. AliKhan.

There are at least 11 women who currently head those offices—five of whom have taken over since 2018 alone. Michigan recently appointed the first Muslim Arab American to serve as a state’s solicitor general—and she happens to be a woman.

Hopefully, the increase in women in these positions will soon translate into “more women from State SG’s offices at the Court’s lectern,” AliKhan said. 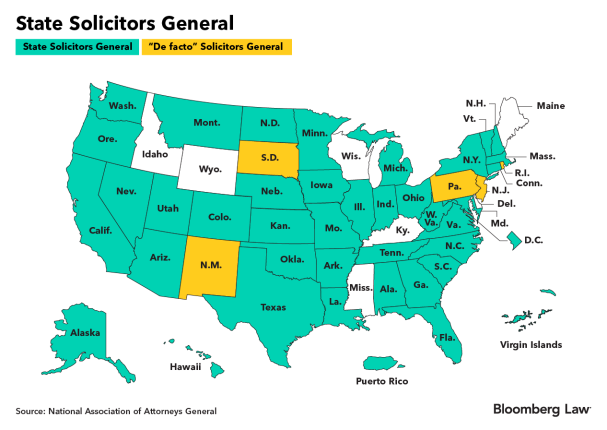 The dearth of female attorneys arguing at the high court highlights systemic problems with Supreme Court “feeder jobs,” which have typically been dominated by male attorneys.

The recent drop in the number of women in the U.S. Solicitor General’s Office—the relatively small office that represents the United States at the high court—is particularly problematic, given the frequency with which the office argues at the Supreme Court. Of 112 appearances at the high court so far this term, more than a quarter were made by attorneys from the federal office.

But state SGs’ offices are a good “option for gaining high-profile appellate advocacy experience that would be helpful for building a Supreme Court practice,” Goelzhauser said.

At least 17 current state solicitors general have argued one or more cases at the high court. And at the halfway point of the court’s 2018 term, state SGs have already argued in eight of the approximately six dozen cases the court will hear overall.

“Not only does a large percentage of the Supreme Court’s docket involve cases wherein a state or a state-entity is a party, but states appear as amici” in numerous Supreme Court cases, Virginia Deputy Solicitor General Michelle Kallen said.

And states are among the rare groups that are allotted argument time as an amici, lending support for a party or position, Kallen noted.

Four months into her role as deputy SG, Kallen sat at counsel’s table in the Supreme Court alongside Virginia’s attorney general. But she’s also argued twice at the Virginia Supreme Court and U.S. Court of Appeals for the Fourth Circuit.

Not every state has a dedicated advocate to oversee their appellate practice, said Dan Schweitzer, of the National Association of Attorneys General. But the number has nearly doubled since the 1990s.

Currently there are 38 states with solicitors general, plus D.C., Puerto Rico, and the Virgin Islands, Schweitzer said.

State “SG’s offices vary widely in their size and the type of work they do,” AliKhan said.

The D.C. SG’s office “handles all appellate litigation for the District,” but others “handle only certain types of appeals or act more as a reviewer than a drafter of briefs,” she said.

AliKhan, Kallen, and See all praised their offices’ commitment to providing female attorneys with opportunities to represent their states in top-flight litigation.

But See said the position often highlights “how rare that sort of experience still is.”

“I’m almost always the only or one of a small number of women on a call, or signing a multi-party brief, or in the courtroom, See said.

“My hope is that a growing appreciation for the value of appellate experience in state government will help open doors for women and other underrepresented attorneys in the profession more generally.”