A Starbucks Corp. vanilla latte and doughnuts are on display.
Ramin Talaie/Bloomberg via Getty Images

Starbuck’s, Kellogg’s, and General Mills are only a few of the many companies that have found their products targeted under California’s chemical warnings law in recent years.

But look out food and beverage makers, even more warnings-law related activity is expected as new, stricter requirements go into effect next week, the author of the Proposition 65 right-to-know statute tells Bloomberg Law.

The most likely reaction to the tougher warnings: more product makers will follow the lead of companies like Coca-Cola and PepsiCo and “quietly” change their chemical formulas to avoid having to put the detailed, attention-getting warnings on their products.

But you likely won’t hear much about the bulk of these changes, according to David Roe, who drafted Prop 65 while working as an attorney for the Environmental Defense Fund in 1986.

Most of the action will continue to take place out of both the courtroom and the public eye through voluntary “quiet compliance.” 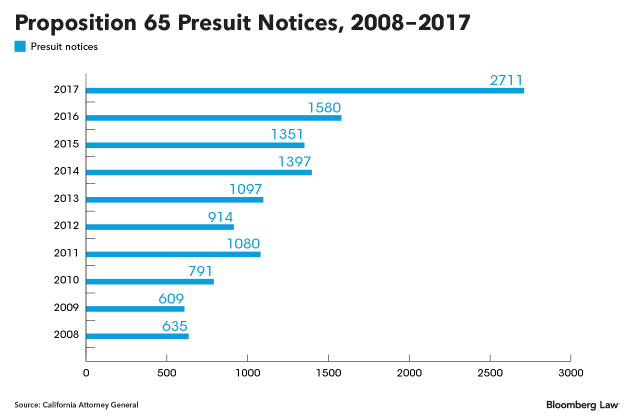 The 1986 law requires businesses to provide warnings about cancer or birth defects if their products could expose people to one of more than 800 chemicals on a list the state updates annually.

The law allows for enforcement by both government attorneys and private enforcers, provided they file a 60-day notice of intent to sue that goes to the company and California’s attorney general.

The warnings required under the law over the last 30 years have been fairly general. For example, a warning might say, “This product contains a chemical known to the state of California to cause cancer.”

However, under the change in the law that will take effect August 30, product warnings must be both more detailed and more prominent.

For example, “This product can expose you to chemicals including arsenic, which is known to the State of California to cause cancer. For more information, go to www.P65Warnings.ca.gov.”

The new warnings are an attempt to give people neutral but useful advice, according to Caroline Cox, a staff scientist at the Center for Environmental Health in Oakland, Calif., a frequent Prop 65 litigator.

Researchers from the University of California, Davis, interviewed more than 1,500 randomly selected Californians and asked them to compare the new warnings with the current general warnings, according to the Office of Attorney General Xavier Becerra. The vast majority (77 percent) of respondents said the new ones would be more helpful.

But critics of Prop 65 decry a proliferation of warnings they said have lost meaning for California residents as they have been saturated with cautionary language in airports, gas stations, hotels, amusement parks, and countless other places. They also said the new requirements will only worsen the over-warning problem.

“The warnings are so omnipresent that consumers encounter them at almost every turn,” said defense attorney Amy Alderfer of Cozen O’Connor in Santa Monica, Calif.

“How can people reasonably make informed decisions when warnings are everywhere?” asked Alderfer, whose practice includes representing businesses in Prop 65 compliance and litigation.

Some research backs up those concerns. The amount of information people are capable of processing is limited, said Lisa Robinson, a senior research scientist at Harvard University’s T.H. Chan School of Public Health in Boston.

“Even if I accessed and understood the information on each chemical that I might possibly be exposed to each day, it would be very difficult for me to weigh the benefits and harms as part of my decision-making process,” Robinson, one of the authors of an article Consumer Warning Labels Aren’t Working, told Bloomberg Law.

But attorneys who bring private Prop 65 enforcement suits said the warnings aren’t the real measure of the law’s success.

Somers and Roe, the statute’s author, both said reformulating products is the real goal of Prop 65, and this “quiet compliance” has been where the vast majority of the law’s successes have occurred.

Such compliance happens when companies proactively opt to reformulate a product once a chemical is added to the state’s list but without a presuit notice being sent, Roe said.

“Nobody ever issues a press release saying, ‘We used to expose you to a chemical that causes cancer, and we just stopped,’” Roe said.

Which is just fine with Roe and other advocates of California’s Prop 65.

After all, Eric Somers of the Lexington Law Group in San Francisco told Bloomberg Law, Prop 65 may be a warnings law, but its real value to consumers is in all the products that have been changed over the years, reducing exposure to toxic chemicals.

Somers represents private organizations and individuals who sue to enforce the law’s requirements including CEH.

An example of such a change occurred when and removed 4-methylimidazole, a cancer-causing contaminant in caramel coloring, from soft drink products shortly after it was added to the list in 2011, CEH said.

Still more companies are expected to find alternatives to listed chemicals as the new requirements go into effect, they said.

If so, that would add to the already steadily increasing level of activity sparked by Prop 65.

The number of presuit notices filed by private individuals and groups under the law has risen more than fourfold over the last decade, according to data from the attorney general’s office.

This year is nearly on pace with last year, with 1,360 notices sent between January 1 and August 8.

As far as the kinds of chemicals targeted under Prop 65, Alejandro Bras, whose practice includes Proposition 65 defense, said that while more than 800 chemicals are listed, “the bulk of them never see any action,” under the law.

Acrylamide, which is formed when starchy foods are heated, is “probably the chemical du jour,” Bras said. Hundreds of presuit notices have been filed specific to acrylamide in foods, especially over the last 12 months, he said.

Prop 65 and acrylamide have been the focus of high-profile Prop 65 litigation, including ongoing fights over whether coffee and cereals need to carry a warning because of cancer risks. . and Keurig Green Mountain Inc. have both been sued over their coffee, as have many other coffee makers.

, and are some of the companies sued over their cereals. 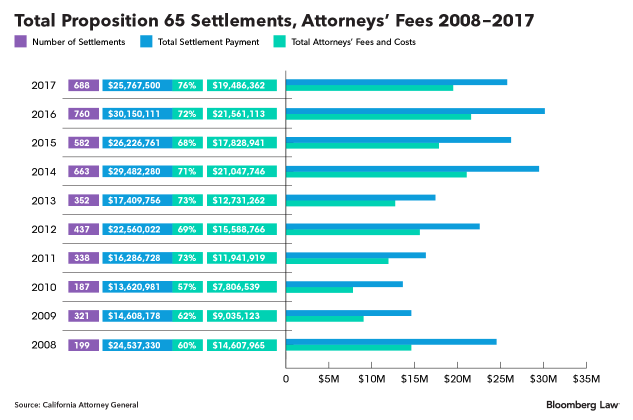 The law includes a potentially heavy hammer against non-compliant companies: civil penalties of up to $2,500 per violation, per day.

Prop 65 settlements also typically include attorneys’ fees when private individuals or groups are the enforcers.

Roe, Sommers, and other Prop 65 advocates said formula changes to prevent toxic exposures, not money, motivate their actions. But defense attorneys point to the fees aspect of the litigation as the main driver behind most of the statute’s enforcement activity.

Product testing and other expenses mean defending right-to-know suits are very expensive for companies, attorney Corrie Plant of Bick Law LLP in Newport Beach, Calif., told Bloomberg Law. Consequently, most Prop 65 suits are “settled without regard to whether or not there is actually an exposure.”

More than three-quarters (76%) of total money paid through settlements over the last 10 years have gone towards attorneys’ fees, Plant said.

That’s “huge,” she said. “The percentage paid in penalties is minuscule in comparison.”

But Roe and Somers both defend the Prop 65 fees’ awards.

“What the defendants are complaining about is that the plaintiffs get their fees paid by the other side,” Roe said.

The reason for fee provisions in Prop 65 and many other environmental and consumer laws, is that government attorneys don’t have the time or resources to pursue smaller violations, Roe said.

CEH’s Cox also said, “The amount that has been spent on Prop 65 attorneys’ fees could never pay the budget of an agency if instead of Prop 65 we had a state agency that accomplished the same benefits.”

Somers, who represents the Center for Environmental Health, also noted that a judge has to approve all Prop 65 settlements, including the attorneys’ fees.

That’s similar to how fees in class action settlements are checked for fairness.

Julie Steinberg
Reporter
Starbucks Pressed to Remove Carcinogen, Not Just Warn About It
Cereal Ruling to be Challenged, Calif. Warning Law in Spotlight
© 2021 The Bureau of National Affairs, Inc.
All Rights Reserved