A copyright clash over ’s celebrity images drew the US Supreme Court into a spirited and at times laugh-inducing debate involving , “Lord of the Rings” and Justice ’s years as a Prince fan.

Hearing arguments in Washington, the justices grappled with a photographer’s claim that Warhol violated her copyright by basing his images on her 1981 portrait of Prince. The case could reshape the fair-use defense to copyright infringement for follow-on works, affecting music, videos and books, as well as Warhol’s pop art.

The 102-minute argument didn’t clearly indicate which way the court would rule as the justices sought to balance the rights of copyright owners with the needs of artists who create follow-on works. But it offered several moments of comic relief in what is likely to be a divisive Supreme Court term.

Thomas was at the center of much of the frivolity. He mentioned in passing that he was a Prince fan in the 1980s, prompting Justice to ask him wryly, “No longer?”

As the courtroom broke into laughter, Thomas smiled and responded “only on Thursday nights.”

Thomas then crafted a hypothetical question that had him doubling as a fan of the Syracuse University basketball team, whose nickname is the Orange. Thomas asked , the lawyer representing the for the Visual Arts, whether the justice would get sued for making a huge poster of Warhol’s orange-colored Prince image, with the words “Go Orange” added at the bottom, to wave at Syracuse games.

When Martinez said it was unlikely the foundation would sue a single fan, Thomas quickly interrupted. “Oh, no, no, I’m going to market it to all my Syracuse buddies,” the justice said, drawing more laughter from audience members and justices alike.

Justice then quipped that “my colleague Justice Thomas needs a lawyer.”

Warhol created the images in 1984 as part of a project for Vanity Fair, which paid Goldsmith a $400 licensing fee so he could use her photo as an “artist’s reference.” Warhol created 16 images, only one of which ran in the magazine.

Litigation erupted after Vanity Fair parent in 2016 paid the foundation $10,250 to run a different image from the Prince series in a magazine commemorating his death, without giving Goldsmith any additional payment or credit.

Goldsmith’s lawyer, , said Warhol and the foundation should have been required to get a license from the photographer for all uses of her photo.

The foundation characterizes Warhol as “a creative genius who imbued other people’s art with his own distinctive style, but Spielberg did the same for films and for music,” Blatt said. “Those giants still needed licenses.” 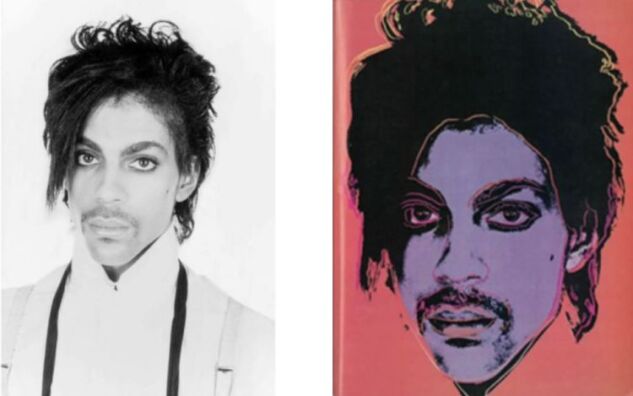 Looking at the images side by side, “you don’t say, ‘Oh, here are two pictures of Prince,’” Roberts said. “You say, ‘That’s a picture of Prince, and this is a work of art sending a message about modern society.’”

Blatt, a veteran Supreme Court advocate, drew laughter herself when she said that “I guarantee the air-brushed pictures of me look better than the real pictures of me, and they have a very different meaning and message to me.”

Justice indicated she was a “Lord of the Rings” fan when she used that as an example in asking Martinez how he would analyze movies that are based on books. Martinez said he wasn’t sure whether the “Lord of the Rings” movies had a “fundamentally different meaning or messages” from the books.

When Barrett indicated surprise, Martinez quickly backtracked, suggesting he was less familiar with the works than she was. “I would probably have to learn more and read the books and see the movies to give you a definitive judgment on that,” he said, as the justice laughed.

Goldsmith has support from the Recording Industry Association of America and the National Music Publishers’ Association. The Motion Picture Association filed a brief that didn’t formally take sides in the case but said the Warhol position would “threaten the protection afforded all manner of copyrighted works.”

The Biden administration is also supporting Goldsmith, suggesting the court protect Warhol’s creation of the Prince Series but not the foundation’s commercial licensing of the Prince image. The images are now worth large sums of money, with one selling for $173,664 in 2015.

The Supreme Court in 1994 said parody could qualify as fair use. That case involved 2 Live Crew’s parody of the Roy Orbison song, “Oh, Pretty Woman.”

The court is scheduled to rule by late June in the case, Andy Warhol Foundation v. Goldsmith, 21-869.

(Updates with excerpts from arguments starting in eighth paragraph.)