Voting-rights advocates are worried as the U.S. Supreme Court prepares to hear arguments in an Arizona case that could undercut the landmark law that’s protected the rights of minorities at the polls for a half century.

Tuesday’s clash over the 1965 Voting Rights Act comes as Republican-controlled states consider a barrage of new restrictions that could make it harder for minorities to cast ballots in 2022 elections. It follows November’s presidential contest in which refused to concede and instead made baseless assertions of widespread fraud.

And the case comes before a Supreme Court that, bolstered by three Trump appointees, has only grown more conservative since it nullified a key component of the law in 2013.

“The court could decide this in a number of ways which could include weakening or limiting” the law, said , a voting rights litigator at New York University’s Brennan Center for Justice. 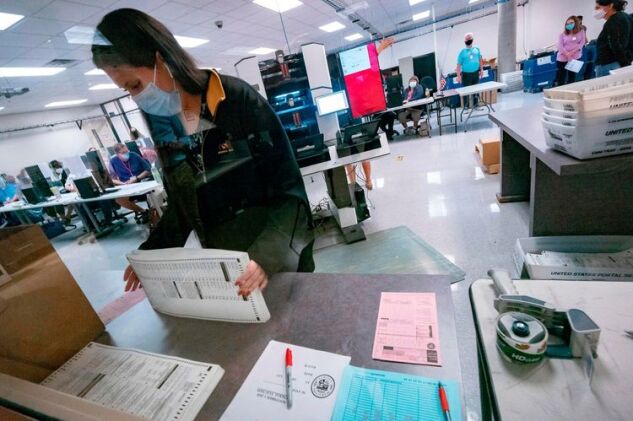 The case centers on the law’s Section 2, a provision that’s now the primary tool for challenging voting laws as discriminatory. Section 2 took on heightened importance after the high court’s 2013 Shelby County decision effectively killed a separate section that had required some states to get federal clearance before they changed their voting rules.

A federal appeals court invoked Section 2 to invalidate two Arizona policies as having a disproportionate impact on minority voters. The San Francisco-based court struck down a law that made it a crime for most people to collect or deliver another person’s early ballot, a practice critics call “ballot harvesting.” The appeals court also voided Arizona’s longstanding policy of rejecting ballots cast in the wrong precinct.

In addition, the majority said the ballot-collection law amounted to intentional discrimination, violating both Section 2 and the Constitution’s 15th Amendment.

“Both restrictions disparately impact minority voters, who disproportionately rely on ballot collection and are twice as likely as white voters to vote out-of-precinct,” according to a brief from the Democratic National Committee, which is challenging the rules. “These disparities are directly attributable to the ongoing effects of Arizona’s documented history of racial discrimination.”

But Arizona Attorney General , a Republican, said in an interview the rules don’t deprive anyone of an equal opportunity to cast a ballot.

“Arizona, like a lot of states, has common-sense measures designed to protect the integrity of the ballot and the election process,” said Brnovich, who will be arguing for the state on Tuesday. “And you have out-of-state, left-wing groups that are trying to undermine or challenge those rules and regulations.”

The argument will be the Supreme Court’s first on election law since the 2020 presidential vote, and the first with three appointees of the losing candidate, Trump. The court is scheduled to rule by June.

The case will be as much about the method the court uses as the outcome. The court has never said what standard should apply when Section 2 is invoked to challenge laws that make it harder for minorities to register and vote.

Section 2 bars any voting practice that “results in a denial or abridgement” of the right to vote based on race. The measure says courts should look at the “totality of the circumstances” to determine whether some groups “have less opportunity” to participate than other voters.

A lineup of litigants, also including the Arizona Republican Party and Democratic Secretary of State , is presenting the court with an array of tests to implement those words.

The Trump administration proposed its own standard before leaving office, and argued for upholding the rules, but President ’s administration withdrew the brief this month. The new administration said it agreed that the Arizona restrictions were valid, while disavowing the legal standard the Trump team had urged.

The new administration chose not to file its own brief and, in a rarity for a Voting Rights Act case, won’t be arguing on Tuesday.

The Brennan Center, which filed a brief opposing the Arizona rules, says legislators around the country have introduced more than 165 bills this year to restrict voting access, more than four times the number from a year ago. The swing states of Arizona, Pennsylvania and Georgia have the largest number of pending bills, according to the policy institute.

If those laws can’t be challenged under Section 2, “it would be taking away one of the big tools, in fact the main tool we have left now, to protect voters against racial discrimination,” Perez said.