Judges are interpreting the law on the fly as they face an unprecedented spike in requests for “compassionate release” from prison, coming to different conclusions about what can be done in the context of a pandemic.

The swell of requests for what’s known as compassionate release come after the passage of a law, written before the Covid-19 outbreak, that made it easier for those requests to be filed with the courts.

Federal judges ruled on more than 400 petitions for compassionate release in March and April, compared with only 16 in the same months last year, according to a Bloomberg Law analysis of trial court-level filings.

“I had never seen a compassionate release motion before the pandemic, and now I’ve seen more than 10,” U.S. District Judge Jed S. Rakoff, a senior judge in the Southern District of New York, said in an interview.

Under the law passed in 2018, judges can make a determination about compassionate release after the U.S. Bureau of Prisons has said “no” or doesn’t respond to the inmate’s request in 30 days. Those determinations are highly individualized and outcomes can vary widely from judge to judge, all of whom are now weighing requests without updated guidance.

The influx is touching every corner of the legal system. Lawyers and advocates are frustrated releases aren’t being granted more often, while probation officers are working with limited resources to respond to an influx of them, and inmates in close quarters fear for their lives.

“A system that normally takes years to resolve disputes suddenly has to resolve a mountain of life-or-death disputes in days. All that judges can do is their level best,” said Matthew Stiegler, an attorney who focuses on federal appeals in the Third Circuit, told Bloomberg Law.

Compassionate releases are one method of release typically granted to older inmates, often in poor health, who don’t present a danger to people or the community.

That differs from releasing individuals to serve the reminder of their sentences at home. President Donald Trump’s jailed lawyer, Michael Cohen, and his former campaign chairman, Paul Manafort, are among the inmates who’ve sought that type of release. Manafort’s request was granted last week. Cohen is still waiting.

The decision to grant a compassionate release largely hinges on whether that inmate has what the statute calls “extraordinary and compelling” circumstances. That includes failing health in old age, a terminal illness, or caring for a partner or child if they are incapacitated.

In the past, those requests only made their way into court after the Bureau of Prisons agreed the request should be granted. That system was criticized for being slow and inefficient.

The First Step Act, a bipartisan bill that became law in 2018, addressed those concerns, in part, by giving inmates the route to take their requests to court.

“When Congress passed the law and that language was in there it made sense, but no one expected a pandemic,” Ricardo S. Martinez, chief judge of the Seattle-based U.S. District Court for the District of Western Washington, said in an interview.

“After the First Step Act came into place we immediately saw a jump in those petitions,” said Martinez, who is chair of the Criminal Law Committee of the Judicial Conference, the federal judiciary’s policy-making body. That’s been exacerbated by the virus, but even after the pandemic subsides, Martinez said he foresees a continuing high number of petitions each year.

FAMM, a group that advocates for justice reform and pushed for the changes to compassionate releases in the First Step Act, has encouraged inmates to apply for them during the outbreak and is providing them with attorneys.

Judges “don’t want to be a party to people dying who were not sentenced to death,” FAMM President Kevin Ring said.

The courts, however, are divided on what that statute means in the Covid-19 era.

Some have determined that inmates must first exhaust administrative avenues within the Bureau of Prisons.

In the precedential April 2 decision in U.S. v. Raia, D. Brooks Smith, chief judge at the U.S. Court of Appeals for the Third Circuit, said that while the court didn’t want to “minimize the risks” the virus poses to prisons and inmates, “the mere existence of COVID-19 in society and the possibility that it may spread to a particular prison alone cannot independently justify compassionate release.”

That ruling denied the release of former Hoboken, New Jersey, City Council candidate Francis Raia, 68, who received a three-month sentence in December after his conviction for promoting a voter bribery scheme. Raia has Parkinson’s Disease, diabetes and heart issues, according to court filings.

Brooks did, however, note that the administrative exhaustion requirement “presents a glaring roadblock foreclosing compassionate release at this point.”

In denying the request of inmate George S. Hofmeister, 68, a Lexington, Kentucky, federal judge said that the exhaustion requirement was “perhaps most important” under the current circumstances caused by the virus. Hofmeister was convicted of pension plan theft and money laundering and is serving a 41-month sentence.

A Portland, Oregon, federal judge ruled that she, “does not have the authority
to excuse an inmate’s failure to comply with” the exhaustion provision, though it agreed that the virus poses a high risk to prisons. U.S. District Judge Anna J. Brown denied the release of Jack Holden, 79, who was convicted of money laundering and other charges over his role in a biodiesel scheme. He’s serving an 87-month sentence.

But some judges have read the statute differently. SDNY’s Rakoff is one of them.

On April 13, Rakoff ruled that the circumstances created by the pandemic merited waiving the 30-day waiting period before inmates can seek release in court.

Ruling in U.S v. Haney, Rakoff said that “in the extraordinary circumstances now faced by prisoners as a result of the COVID-19 virus and its capacity to spread in swift and deadly fashion, the objective of meaningful and prompt judicial resolution is clearly best served” by allowing the 61-year-old defendant “to seek relief before the 30-day period has elapsed.”

Though he ultimately denied Hugh Haney’s release for other reasons, including the fact that he doesn’t have a health condition, Rakoff’s reasoning regarding exhaustion has been adopted by other courts.

Detroit federal judge Laurie J. Michelson referenced it in granting a compassionate release to Ali Atwi, who’s serving a four-month sentence for food stamp fraud. Atwi has been diagnosed with tuberculosis, which affects the lungs.

In her ruling, Michelson reasoned that “30 days when the statute was passed and 30 days in the world of COVID-19 are very different.”

Her Eastern District of Michigan colleague, Judge Denise Page Hood, also decided the exhaustion can be waived for Joseph Saad, 71.

Saad was convicted of unlawful distribution of controlled substances and is serving a 72-month sentence. Saad has numerous ailments including “a frozen thigh from an overdose of coumadin given by prison officials,” according to Hood.

“The Court is cognizant that Defendant is not scheduled to be released for more than three years, but it cannot ignore that the threat of COVID-19 exists now,” Hood said in her decision.

Another reason judges see the issue differently is that the U.S. Sentencing Commission, which would ordinarily give guidance to judges, has been inactive because it lacks enough members to have a quorum.

The First Step Act requires that the sentencing be consistent with commission guidelines, but the commission hasn’t been able to update those since the law was passed, said Sarah Johnson, a supervising U.S. probation officer. She is currently a resident of the Director’s Leadership Program at the Probation and Pretrial Services Office focused on the First Step Act.

At a minimum, the commission would add language that courts have the authority to determine other categories for “extraordinary and compelling” circumstances, Johnson said. Without such a change, only the Bureau of Prisons has that power.

Some courts have decided that under the statute, they have the freedom to interpret the law the way BOP would.

U.S. District Judge Vanessa L. Bryant in Hartford, Connecticut, granted a compassionate release for an inmate with three chronic conditions considered by the Centers for Disease Control and Prevention to be risk factors for coronavirus—HIV, diabetes, and hypertension—even though those factors don’t fall within the sentencing guidelines.

Anton Jepsen, 55, was serving a nine-month sentence after violating the terms of his release for a previous conviction. After determining he had exhausted his administrative rights, Bryant concluded that “the Court may determine that ‘extraordinary and compelling’ reasons may exist beyond those delineated by the commentary to” the statute.

The fact Jepsen had eight weeks left on his sentence was also a contributing factor in Bryant’s decision, she said.

But even when all the criteria are met and a judge determines that an inmate is eligible to be released, the coronavirus can act faster than the system.

Robert Russo, 64, was diagnosed with Covid-19 while awaiting a ruling on his compassionate release request. Russo pleaded guilty in 2018 to a charge related to robbing a cab driver. He was nearing the end of his sentence.

Still, in an April 14 ruling. Southern District of New York Judge Lewis J. Liman wrote that he was just about to order Russo released even though he hadn’t exhausted his administrative process, based on his “number of serious, chronic medical conditions,” until learning he’d contracted the virus.

At that point, the judge said, he had to deny the request until Russo’s condition improves, BOP can find a way to care for him, or other circumstances change.

“Mr. Russo’s story confirms the heart-wrenching reality that every day matters in these cases,” Liman wrote.

Russo’s attorney, Robert M. Baum, a federal public defender, told Bloomberg Law his client has almost recovered from the virus, but his medical conditions, including one that will require surgery, remain a persistent issue. Baum said he was disappointed by the decision because he’s seen inmates diagnosed with the virus, released since Russo’s request was denied. 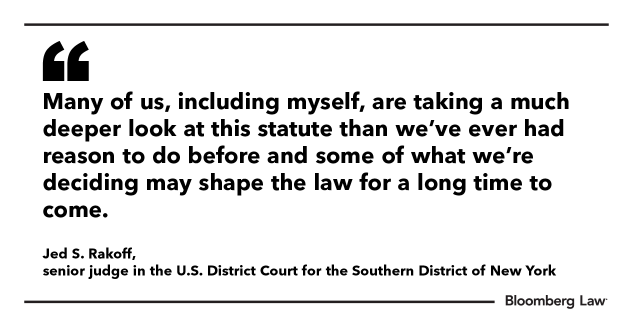 The influx of cases may bring more clarity to the statute those determinations rely on.

“The best that could come out of this is that through this process we really see where the statute could have areas for improvement and definition and those things happen as a result of these decisions being made,” Johnson, the supervising U.S. probation officer, said in an interview.

Judges are making a point to say that their decisions are being made in the special context of the virus, but that doesn’t mean they will adhere to that when the pandemic is over, Rakoff said.

“Many of us, including myself, are taking a much deeper look at this statute than we’ve ever had reason to do before and some of what we’re deciding may shape the law for a long time to come,” he said.