The American Bar Association was attempting to shake off years of declining membership and financial struggle with fresh programs and a renewed emphasis on social justice while trying to make itself relevant among tech-savvy professionals.

Now the pandemic is threatening to undercut progress made by the lawyers association just as it had seen a modest resurgence.

A top new worry is whether law firms seeking to cut costs during the outbreak will reduce or eliminate paying membership dues for their attorneys. The ABA fears that could damage revenues after a decade in which total membership dues fell sharply. 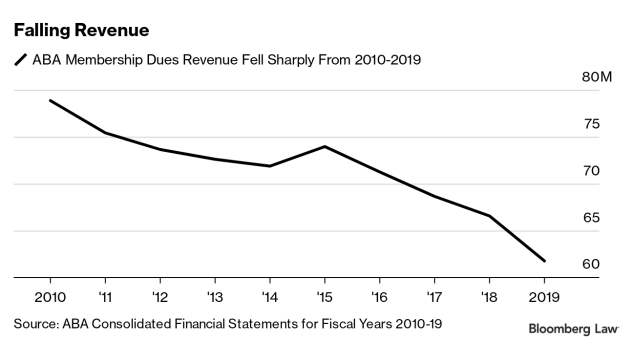 “With all the economic disruptions at law firms, it can’t be a surprise to anyone that ABA membership will suffer,” said Stephen A. Saltzburg, a George Washington University law professor and former chair of the ABA Criminal Justice Section and an association booster.

The ABA has responded to Covid by quickly pivoting to remote education and saving on in-person meetings. But that wasn’t enough to offset weaker revenues and avoid layoffs in closing a projected budget shortfall. The ABA acknowledges it can’t cut its way out of trouble.

The ABA’s access-to-justice focus is a cornerstone, and it can claim credit for prodding Congress to create the Legal Services Corporation, which helps the poor. The organization holds programs that still attract thousands, and offers widely used professional tools. Its ethics and other rules remain influential.

Dues over the past decade comprised roughly a third of money coming in overall and is a bit lower now as a percentage of operating revenue. Also, they’re no longer ABA’s single-largest revenue source as the lawyer’s group has broadened its funding base.

General operations revenue makes up slightly less than half of overall ABA revenues. Sections and gifts and grants account for the remainder.

But membership growth and dues collection are critical in helping ABA convey its value to a new generation of attorneys.

Dues receipts fell from $78.9 million in fiscal year 2010 to $61.8 million in 2019, ABA consolidated financial statements show. Those revenues are down again this year.

The ABA has posted a string of operating losses despite reducing general operating expenses by $48 million, or by about half, since 2015, adjusted for inflation and including projected budgeting for the fiscal year beginning Sept. 1.

The pandemic’s impact on revenues worsened the ABA’s projected budget shortfall for fiscal year 2021 from $1 million to more than $9 million before new cuts that included layoffs totaling less than 2% of its nearly 1,000-member staff balanced things out.

Still, “growing revenue is the only way to get off the expense-reduction treadmill we’ve been on thus far,” outgoing treasurer Michelle A. Behnke said this month.

The ABA revamped its dues structure over the past year by lowering charges, and since then more than 23,000 new members joined through May 31. That more than doubled its target, Executive Director Jack Rives said in a report in recent weeks to the ABA’s policy making body. But at $39.6 million, the group was about 7% shy of its general operations revenue goal as of July 31.

“Of course, the longer the pandemic causes economic disruption, the greater the challenge,” he said in the report. Dues typically fall during U.S. economic downturns.

Rives said in an interview with Bloomberg Law prior to the pandemic that wrenching changes were on tap if growth didn’t meet expectations in the next year or two.

Law firm membership and dues they pay are a concern now amid the pandemic. These include Big Law as well as dozens of large and medium firms.

Full firm membership rose by 14% to 114 firms through May 31 and accounted for more than 27,000 members, a 6.6% increase over the 2019. But revenue from full firm memberships fell by less than 1% to $5.4 million because of lower rates and it could fall further if the pandemic forces firms to cut more spending.

“As such, it is possible we may experience a severe dip in membership, which would in turn impact our dues revenue,” Rives said.

So far, two firms, which the ABA declined to name, plan to stop paying dues because of Covid’s economic impact. Others have asked to spread out payments.

Kent Zimmerman, a law firm adviser with with Zeughauser Group, said firms are more likely to cut big ticket items like compensation and real estate. Many have already “had extensive expense savings this year” as in-person business development and marketing activities got canceled due to Covid-19.

The ABA also saw a 14% reduction to $16 million in group membership revenue from government, law schools, and other organizations this fiscal year. Moreover, it faces competition from state and other bar associations, and groups like the Federalist Society, a networking organization that attracts conservative attorneys.

The pandemic’s long-term impact on operations is uncertain, but Behnke said the ABA is “preparing to pivot as we learn more.”

For now, the ABA is pushing ahead. It sought help in the next coronavirus stimulus package to ease financial pressure, and is highlighting the simplified fee structure and online content. As of May 1, it had more than 600 CLE programs that are free for members, Rives said.

At the onset of the pandemic, the ABA “showed its best in quickly offering an enormous amount of free content to help members help their clients and firms navigate uncharted legal waters,” said former president Linda Klein.

The ABA isn’t the only professional association that has to think differently about membership engagement and shift from place and time-based engagement to ongoing networking opportunities, said brand leadership expert Denise Lee Yohn. Associations also have to use digital tools creatively to “inspire and promote the industry and profession to other stakeholders,” she said.

Still, the ABA’s new president, Patricia Lee “Trish” Refo, said in an interview that there’s “enormous work ahead of us” to address the economic downturn.

The group can use its reach and messaging about core missions of increasing access to justice, defending the rule of law, and supporting lawyers to reach out to law students and young lawyers, UCLA Law Dean Jennifer L. Mnookin said last fall.

In the past, the ABA’s work shaping American legal system provided participants with experiences that proved to be the pinnacle of their careers.

John D. Feerick, a former Skadden partner and dean of Fordham University’s law school, recalled how, as a young lawyer, he served on an ABA committee after John F. Kennedy’s assassination that was instrumental in creating the 25th Amendment on presidential succession.

“People have dreams of making the world a better place,” said Feerick. “If you want to make a difference as a lawyer, the bar is a wonderful place to do that.”