The canopy of the U.S. Capitol rotunda is pictured.
Andrew Harrer/Bloomberg via Getty Images

A Donald Trump nominee criticized for her anti-abortion advocacy and considered unqualified by the American Bar Association for a lifetime judicial appointment was confirmed to a federal district court seat.

The Republican-led Senate voted 49 to 44 on Dec. 4 to confirm Sarah Pitlyk to the U.S. District Court for the Eastern District of Missouri.

Four other district nominees confirmed in addition to Pitlyk are part of the Senate’s push to clear more nominees in the next few weeks. They’re included in Trump’s goal of surpassing 180 judicial appointments by the end of the year. Trump has appointed more than 160 judges to district and appeals courts as well as Brett Kavanaugh and Neil Gorsuch to the Supreme Court.

Pitlyk clerked for Kavanaugh when he was on the U.S. Court of Appeals for the District of Columbia Circuit and currently works for the Thomas More Society, the “national public interest law firm dedicated to restoring respect in law for life, family, and religious liberty.”

Her nomination was opposed by mostly Democratic lawmakers and liberal groups who say her record of advocacy against abortion would make her biased as a judge, but she also had some conservative pushback.

Sen. Susan Collins, a Maine Republican, opposed Pitlyk’s nomination because her “strident advocacy” made Collins question whether she could set aside her personal views when weighing cases.

One area critics of Pitlyk pointed to was a 2017 “friend-of-the-court” brief she filed in a case that the Supreme Court ultimately declined to hear.

In that amicus, Pitlyk and a colleague also said, among other things, that surrogacy has “grave effects on society, such as diminished respect for motherhood and the unique mother-child bond.” 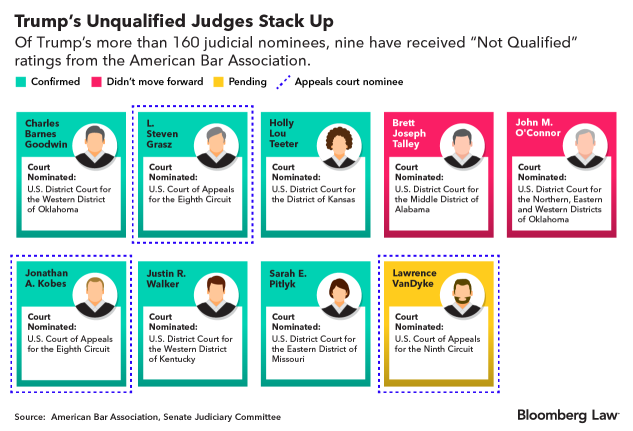 Pitlyk was also unanimously rated “Not Qualified” for a federal judgeship based on her lack of experience by the American Bar Association committee that reviews judicial nominees. She is one of nine Trump judicial nominees rated unqualified by the ABA and the sixth to be confirmed.

During her confirmation hearing, Pitlyk and her Republican defenders on the Senate Judiciary Committee said her personal views on abortion wouldn’t affect her judicial performance.

Some Republicans also dismiss ABA ratings as biased against conservative nominees even though virtually all of Trump’s selections have received favorable marks. Nine have been rated unqualified.

Pitlyk supporters—like her employer and Susan B. Anthony List, a group that advocates for anti-abortion lawmakers and leaders—cheered her confirmation.

“With her world-class education, extensive legal expertise, and commitment to fairness and integrity, we are pleased to see Ms. Pitlyk prevail over partisan obstruction,” SBA List President Marjorie Dannenfelser said in a statement.

Susan B. Anthony List set up a form letter campaign for voters to tell their senators to support Pitlyk.

In addition to Pitlyk, the other nominees confirmed Dec. 4 include: Douglas Russell Cole, for the Southern District of Ohio; David B. Barlow, for the District of Utah; R. Austin Huffaker, for the Middle District of Alabama; and John L. Sinatra for the Western District of New York.