The U.S. Supreme Court is getting the highest approval ratings in a decade, with widespread support for how the justices are doing their job across the ideological spectrum, according to a new Gallup poll released Wednesday.

That may be a result of the court’s consequential term, which wrapped up in July and handed victories to both conservatives and progressives, according to McCarthy. The court ruled that federal anti-discrimination laws protect LGBT workers while giving an out to employers that have religious objections to providing their workers with contraceptive coverage.

One factor at play here is Chief Justice John Roberts, who was in the majority in both the LGBT and contraceptive cases.

“Roberts cares deeply about the Court as an institution” and doesn’t want it to be perceived as “political,” said University of Virginia law professor A. E. Dick Howard. He’s “an expert at playing the long game.” 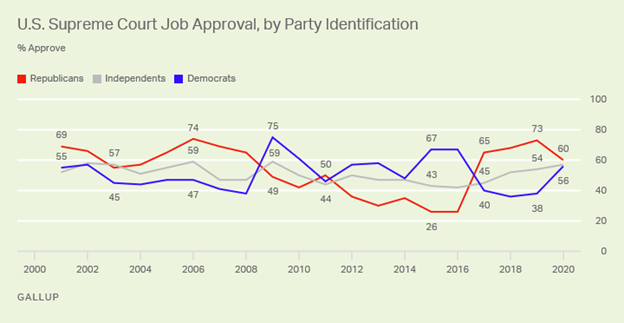 “This level of approval is unremarkable in recent years,” said University of Virginia law professor Kevin Cope. The court has consistently hoved between 45% and 65% approval, Cope said.

The agreement among Democrats and Republicans, though, “is fairly unusual,” Cope said.

At the heart of the converging rating are double-digit swings for both Democrats and Republicans.

The court’s approval rating dropped 13% from last term among Republicans. At the same time, the court’s popularity grew 18% among Democrats. “Independents’ ratings of the Court have hugged fairly closely to the national average over time, with the current rating among this group being the highest since 2009,” McCarthy said.

“It’s plausible that conservatives had high hopes for the Court after the recent Gorsuch and Kavanaugh confirmations,” Cope said. “But a series of high-profile decisions from the last term may have frustrated those expectations, pleasing Democrats but disappointing Republicans.”

The court’s high approval ratings stand in contrast to the other U.S. branches of government.

Howard noted that Congress and the President are closer to 20%. “Only used car salesmen enjoy less confidence,” Howard said.

The poll was conducted July 1-23 via 1,007 telephone interviews across 50 states.

(Updates with comments from UVA professor A. E. Dick Howard.)