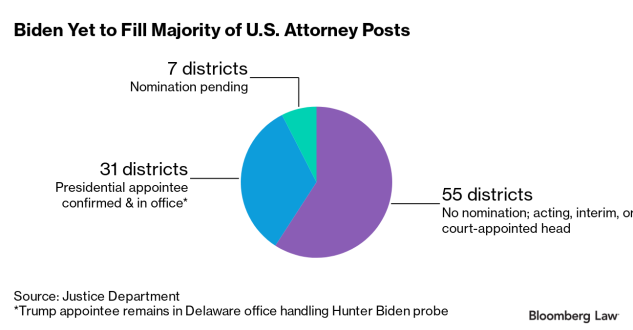 New administrations routinely start their second year still needing to install many of the 93 chief federal prosecutors, after the prior president’s appointees are asked to resign, and routine prosecutions continue unencumbered.

Attorney General Merrick Garland will be counting on having more top prosecutors in place to implement new policy aims on the ground. History suggests the big-ticket items that require a culture change won’t be executed with as much vigor by some of those holding the job temporarily and know their days as boss are numbered.

“To take those policies of an administration and really get them inculcated into an office, that’s where you really need a presidentially-appointed U.S. attorney there to carry, deliver, and enforce,” said Catherine Hanaway, who was top prosecutor in the Eastern District of Missouri under President George W. Bush.

The Justice Department’s new emphasis announced in October on considering a corporation’s full range of prior misconduct and other forms of white-collar crackdowns are the types of policies that will draw skepticism and a cautious approach in certain districts, whereas other acting attorneys will feel unshackled, said Hanaway, now chair at Husch Blackwell.

“That’s opposed to somebody who is appointed by the president and is an evangelist for those policies,” she added.

There are many reasons why U.S. attorney nominations can get delayed. The White House and DOJ consult with the two senators in each district’s state, candidates undergo extensive vetting and background checks, and filling lifetime seats on the federal judiciary takes precedence.

There are signs Senate Republicans are in no hurry to help get the positions filled. Breaking with tradition, the minority party required a cloture vote for Rachael Rollins, who on Dec. 8 became the latest of President Joe Biden’s 30 appointed top prosecutors to get confirmed.

The progressive Rollins, whose aggressive efforts to overhaul criminal justice as a district attorney in the Boston area, made her a prime GOP target, might not wind up an outlier as the Senate takes up the 55 chief prosecutor vacancies in the future.

Republicans are likely to slow-walk additional Biden prosecutor picks if they resemble Rollins in pedigree. This would amplify frustrations from the left that Garland’s DOJ has yet to carry out Biden campaign promises to revamp criminal justice priorities by addressing structural inequities.

“The work of the department continues,” a department spokesman said in a prepared statement. “We expect all USAs and Acting USAs are following the Attorney General’s guidance and directives.”

Despite getting tapped by the White House, U.S. attorneys maintain a higher degree of autonomy from DOJ headquarters than department officials in Washington. They serve at the direction of the attorney general, but are granted wide latitude in how they deploy resources.

Acting and interim bosses are usually career litigators, inclined to respond to any new orders from the attorney general, such as participating in a new task force or working group.

“I don’t think that the world’s falling apart,” said Rich Rossman, executive director of the National Association of Former United States Attorneys. He was a U.S. Attorney in Michigan’s Eastern District late in the Carter administration.

“Things don’t typically come to a halt. Now suppose there’s a controversial case or certain situations where perhaps a prior administration felt strongly about a certain prosecution and another administration may not; that could pose a challenge,” said Carmen Ortiz, an Obama-appointed former U.S. attorney in Massachusetts. “But for the most part the office keeps running as usual.”

Ortiz did note one potential complication: Main Justice often places hiring freezes on an acting prosecutor, preferring to let the eventual Senate-confirmed picks hire their line attorneys. If there’s significant attrition in a district office, as can be customary at the start of a new year, a prolonged top prosecutor vacancy could strain the existing staff.

Asked if a hiring freeze is now in place for unfilled district posts, the DOJ spokesman said, “Generally, acting and interim USAs will coordinate with the Executive Office for US Attorneys to ensure that their offices remain appropriately staffed while nominees are pending,” the spokesman added.

Where having Biden-appointed prosecutors in place can make a difference is in their capacity to adopt a clearer leadership vision.

Depending on the office, “a new U.S. attorney will have greater authority to stand up new initiatives and to lead more definitively if there’s some new direction that they want go,” said John Richter, a former U.S. attorney in the Western District of Oklahoma appointed by President George W. Bush.

Richter, now a special matters and government investigations partner at King & Spalding, said he recently saw three assistant U.S. attorneys speak at a conference to share their offices’ work on healthcare fraud enforcement. The one assistant whose district lacks a Senate-confirmed leader articulated “what sounded like generally the department’s approach to healthcare fraud enforcement in any given year,” he said.

By contrast, the two panelists working for presidentially-appointed prosecutors described their enforcement program with “a little bit clearer vision which they each attributed to their new U.S. Attorney,” added Richter, who also served as an acting assistant attorney general in charge of the Criminal Division in Washington.

The presidential appointee is also more likely to roll out their own protocols tailored to an individual district’s needs.

“If you’ve got a surge in a particular district, say a violent crime, and that presidentially-appointed attorney wants to come in and really use the resources of the federal government and state and local partners to really target that specific issue, then the acting may say, ‘well let’s let the new U.S. attorney be the face of that,’” said Danny Williams, who was top prosecutor in the Northern District of Oklahoma in the Obama administration.

That waiting game is likely to generate frustrations among progressives clamoring for sweeping changes on issues such as voting rights and policing.

“Rachael Rollins, for example,” said Barkow of the freshly-confirmed Massachusetts prosecutor. “You’re definitely not getting that.”