The front of the U.S. District Court for the Central District of California in Los Angeles.
ROBYN BECK/AFP via Getty Images

Two Trump district court nominees, a partner at Milbank and a state court judge who would help alleviate emergency shortages of federal judges in California, cruised through their confirmation hearing Nov. 13.

They’re nominated for seats in the U.S. District Court for the Central District of California, which has nine “emergency” vacancies and the most of any district court in the U.S. California has the most emergencies of any state with 14.

“I’m hopeful that this will be the first of several hearings for California nominees,” said Republican Sen. Marsha Blackburn of Tennessee, who took South Carolina Sen. Lindsey Graham’s place as Judiciary Committee chair at the hearing.

Despite the shortages, the Republican-led Senate has been slow to act on judicial nominees from Democratic blue states like New York and California since President Donald Trump took office in 2017. It has favored the vetting and confirmation of selections for lifetime seats in more conservative states. 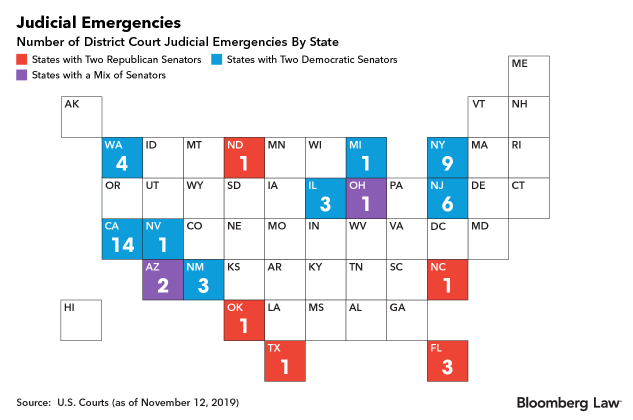 Scarsi and Blumenfeld were first nominated a year ago, but the Senate took no action. They were renominated in January.

But Graham continues to honor the blue slip policy, a Senate custom that requires approval of both home-state senators before district court nominees can move forward. The Judiciary Committee has approved more than a dozen Trump nominees from blue states like Hawaii, Minnesota, Illinois and Maryland.

Emergency vacancies are determined by an algorithm that weighs how long the seat has been open and how many weighted filings a judge in that district handles. There are currently 52 total judicial emergencies caused by vacancies in the U.S. All but one are in district courts.

The absence of the intended number of judges on a given court can lead to delays in court proceedings and more work for the remaining judges. Senior judges who have retired from their seats often have to jump in to lighten the load.

In October, the Chief Judge for the Central District of California Virginia A. Phillips wrote to lawmakers asking them to fill the vacancies.

“Nearly one-third of our authorized judegships sit vacant; some have been vacant for over five years,” Phillips wrote. Those vacancies mean each active judge in the district has a weighted caseload of 986 civil cases, which is nearly double the national average.

While the confirmation of Scarsi and Blumenfeld would aid the judicial emergencies in that court, there are other courts in also asking for assistance.

U.S. District Judge Lawrence O’Neill of the Eastern District of California urged lawmakers to fill two seats in his district and warned of an impending “judicial catastrophe.”

“The statement sounds serious and ominous. It is both. It may also sound like an exaggeration. It is not,” O’Neill wrote.

The panel also questioned two other nominees for federal courts. They were: