The National Rifle Association threw its support behind former President Donald Trump’s three U.S. Supreme Court nominees. It’s about to see whether that bet pays off.

The court will hear its biggest Second Amendment case in more than a decade Wednesday, when it considers a challenge to New York’s tight limits on the right to carry a concealed handgun in public.

Gun-rights supporters are counting on Justices , and to provide the crucial votes to strike down the New York law and establish that the Second Amendment applies outside the home. The three, all of whom have supported gun rights in other contexts, are part of a 6-3 conservative majority that is reshaping American law.

“This is the Second Amendment case that gun-rights advocates have been waiting for,” said Darrell Miller, a professor who teaches constitutional law at Duke University School of Law.

The Supreme Court has been largely silent on the Second Amendment since rulings in and established that the government generally can’t bar handguns in the home for self-defense. Over the next decade, the court repeatedly turned away appeals that sought to extend those rulings to other contexts.

But the court with its newest members in place agreed in April to hear an appeal by an NRA affiliate and two state residents who say the New York restrictions on concealed-carry licenses violate their rights. New York issues carry licenses only to people who can show a special need for protection. A federal appeals court upheld the law. 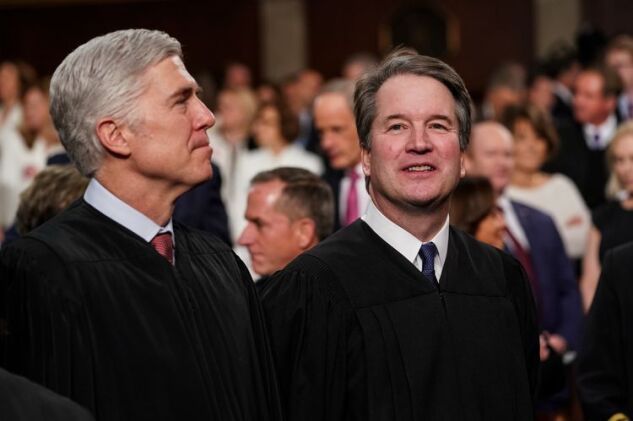 New York is one of eight states -- along with California, Massachusetts, New Jersey, Maryland, Rhode Island, Delaware and Hawaii -- that the NRA says prevent most people from legally carrying a handgun in public. Illinois and the District of Columbia also had sharp restrictions before their laws were invalidated in court.

“It’s a minority of states, but it’s a large portion of the populace,” Miller said.

Of the three, Gorsuch stands as the clearest vote to strike down the New York law. Months after joining the court in 2017, Gorsuch joined an by Justice Clarence Thomas suggesting the two would invalidate a similar California law.

For Kavanaugh and Barrett, the case is likely to come down to history -- specifically, whether the New York law is all that different from gun restrictions that have been around for centuries, including at the time the Second Amendment was enacted in 1791. The Second Amendment covers the right to “keep and bear Arms.”

The Supreme Court made history a central focus in Second Amendment cases in the 2008 District of Columbia v. Heller decision, when the court for the first time said the constitutional provision protects the gun rights of individuals.

As appeals court judges, Kavanaugh and Barrett embraced that approach -- and voted to strike down gun regulations. In 2011 Kavanaugh said he would have invalidated the District of Columbia’s ban on semi-automatic assault rifles and stringent registration requirements.

In 2019, Barrett said people who aren’t dangerous have a right to own a gun even if they have been convicted of a felony. “Founding-era legislatures did not strip felons of the right to bear arms simply because of their status as felons,” she wrote.

Barrett also said in her 2020 Senate confirmation testimony that the Heller decision isn’t absolute. The ruling “leaves room for gun regulations,” she . 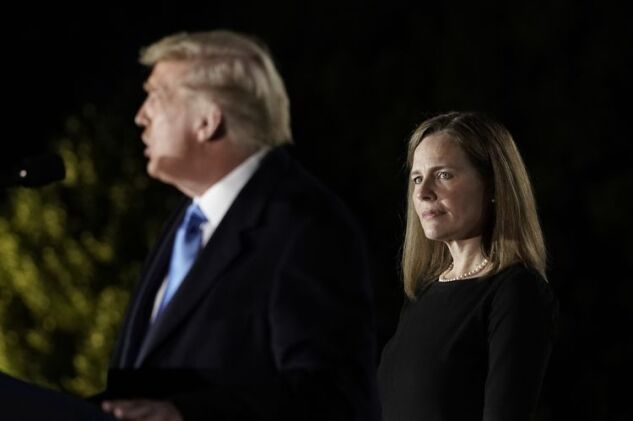 Amy Coney Barrett during her swearing in ceremony on October 26, 2020.
Photographer: Ken Cedeno/CNP/Bloomberg

How the historical approach applies in the New York case depends on whose version of history one accepts. The challengers, led by the NRA-affiliated New York State Rifle & Pistol Association, say the right to carry a weapon was enshrined in the 1689 English Bill of Rights and then reflected in permissive gun laws during the colonial period and after the U.S. became a nation.

“From long before the founding to long after, the right protected by the Second Amendment was widely understood to encompass the right to carry arms abroad, not just to keep them at home,” the challengers argued in court papers.

New York, backed by the Biden administration, says gun-carrying restrictions date back as far as the 1328 Statute of Northampton, which said people could not “go nor ride armed by night nor by day, in Fairs, Markets.” The state also points to 19th century laws that impose carry restrictions, particularly in densely populated places.

“History shows that local officials have long had wide latitude to decide where and under what circumstances firearms could be carried in public, and to restrict the carrying of concealable firearms, particularly in populous areas,” New York argued.

Everytown for Gun Safety, which advocates for universal background checks and gun-safety measures, is backed by Michael Bloomberg, founder and majority owner of Bloomberg News parent company Bloomberg LP. The group filed a brief at the Supreme Court supporting the New York restrictions.

In agreeing to hear the appeal, the court suggested it might be looking for a narrow resolution, reframing the so-called question presented to focus more directly on the two New York residents. Both got licenses to carry handguns in some circumstances, including hunting and target practice, but were denied an unrestricted right to carry.

Michael Jean, director of the NRA’s Office of Litigation Counsel, said the organization would like to see a definitive pronouncement that the Second Amendment protects the right to carry outside the home.

“It seems obvious that it’s right there in the text with ‘bear,’” Jean said. “It seems obvious from the history of the Second Amendment. But for whatever reason, a lot of lower courts have seemed to indicate that it does not protect any right to carry a firearm outside the home.”

Robyn Thomas, executive director of the Giffords Law Center, which advocates for gun regulations, said the NRA is pushing an “extreme interpretation” of the Second Amendment. The gun-regulation advocacy group is named for former U.S. Representative , who survived being shot in the head during an assassination attempt at an Arizona supermarket in 2011.

Under the NRA’s approach, “every single person would have the right to have any kind of weapon they wanted anywhere and for any reason at any time,” she said.