Judge Brett Kavanaugh speaks while his wife Ashley Estes Kavanaugh and President Donald Trump listen in the East Room of the White House on July 9, 2018 in Washington.
Mandel Ngan/AFP/Getty Images

Brett Kavanaugh is President Donald Trump’s nominee to fill the seat vacated by retiring Justice Anthony M. Kennedy, the president announced July 9 in an evening ceremony at the White House.

The longtime judge for the U.S. Court of Appeals for the D.C. Circuit was one of four front-runners narrowed down from a list of 25. The others included Seventh Circuit Judge Amy Coney Barrett, Sixth Circuit Judge Raymond Kethledge, and Third Circuit Judge Thomas M. Hardiman, who was runner-up to Trump’s first Supreme Court pick, Justice Neil M. Gorsuch.

The reaction to the president’s pick was predictably mixed.

Anti-abortion and conservative groups applauded the choice, while environmental, pro-abortion, and LGBT-rights groups warned that Kavanaugh would wreak havoc on fundamental precedents.

Kavanaugh is a “true-blue conservative,” A. E. Dick Howard, a constitutional law professor at the University of Virginia School of Law, Charlottesville, Va., told Bloomberg Law.

Kavanaugh was the predictable choice, Howard said. He emerged early as the front-runner and likely never fell from that spot, Howard said.

He’s got all the qualities that Trump was looking for in a nominee.

Kavanaugh is young, Howard said. At just 53, he’ll serve on the high court for decades.

He’s got strong conservative credentials, having served as a federal appellate court judge for more than a decade, Howard said.

And Kavanaugh has personable qualities that really came through during his address July 9, Howard said.

Everyone who watched the announcement ceremony could see what a wonderful man Kavanaugh is, Edward Whelan, of the Ethics and Public Policy Center, told Bloomberg Law at the announcement July 9.

Kavanaugh will bring his great gifts to the court, including a devotion to the law and a principled method of interpretation, Whelan said.

Some of the president’s other candidates, though, would have added some diversity to the high court bench. 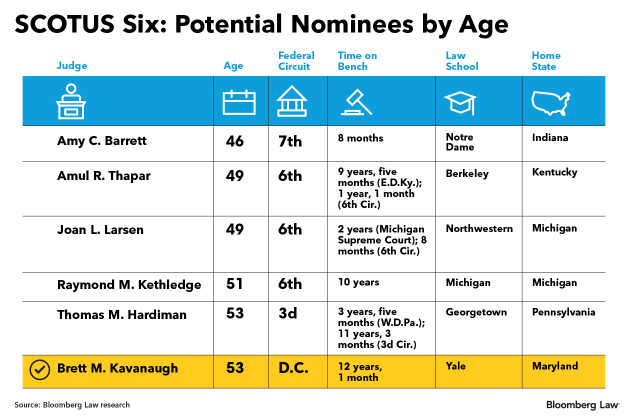 If confirmed, Kavanaugh would be the fourth justice currently on the Supreme Court that came from the D.C. Circuit. The others are Chief Justice John G. Roberts Jr. and Justices Clarence Thomas and Ruth Bader Ginsburg.

And with the confirmation of the D.C.-born Kavanaugh—who now lives in Maryland—all but two of the court’s members will hail from the East Coast. Justice Stephen G. Breyer is from California. Gorsuch is from Colorado.

But it wasn’t the lack of diversity that opponents focused on July 9.

With Kavanaugh’s nomination, Trump has given his “extreme base” exactly what they want, Sharon McGowan, of Lambda Legal, an LGBT rights organization, told Bloomberg Law. Kavanaugh is someone that will go after abortion access, LGBT rights, and healthcare, McGowan said.

There’s a whole host of issues that are now on the line, Andrea Flynn, who focuses on women’s economic security at the Roosevelt Institute, told Bloomberg Law.

Although Kavanaugh recently ruled to delay abortion access to an immigrant teen, his abortion jurisprudence has been otherwise limited, Flynn said.

But the president promised time and again that he’d appoint judges who would restrict abortion access, she said. We should take the president at his word, Flynn said.

But issues like abortion and LGBT rights, which might come before Kavanaugh if confirmed to the Supreme Court, shouldn’t be a consideration during his confirmation, Catherine Glenn Foster, of the anti-abortion organization Americans United for Life, Arlington, Va., told Bloomberg Law.

The focus should be on his 12 years on the D.C. Circuit—often considered the second most important court in the country behind the Supreme Court—and the nearly 300 opinions he’s authored in that position, Foster said.

Nevertheless, we’ve already seen a preview of how those on the right and the left will react to Kavanaugh’s nomination, Dupree said.

But opponents are also likely to focus on Kavanaugh’s approach to administrative law, Dupree said.

He’s a “separation of powers hawk” who’s often reined in administrative agencies like the Environmental Protection Agency and given them less deference than has been traditionally given, Dupree said.

But Kavanaugh is a serious and thoughtful judge, Dupree said. He’s not going to start a revolution on day one, he said.

Pull Out All Stops

We saw recently with some of Trump’s more unpopular policies that when the people make their voices heard, they can really make a difference, McGowan said.

We’ll have to pull out all the stops, she said.