As former President ’s legal entanglements wind their way through the federal courts, he continues to face strong odds of landing before a judge he appointed.

More than half of the active judges on the federal appeals court poised to hear the latest phase of Trump’s fight with the Justice Department over the FBI search of his Mar-a-Lago home got their posts through Trump’s aggressive remaking of the US judiciary.

From the start, his push for a special master to review the records seized as part of a criminal investigation into whether he mishandled classified information highlighted the lasting imprint of his one-term presidency. Trump originally filed his petition in the south Florida federal district court, where a third of the court’s 15 active judges were confirmed under his administration. He wound up before one of his nominees.

The Justice Department is challenging the special master appointment before the 11th US Circuit Court of Appeals. Trump nominated six of the 11 active judges on the circuit. He put four judges from that court, including three of his own nominees, on his public lists of potential Supreme Court telegraphing their standing within the conservative legal world.

How often political connections translate into courtroom victories for Trump remains to be seen. Federal judges will stress that they’re not bound to the presidents who appointed them or party politics. The dozens of judges who rejected efforts by Trump and his allies to undo President ’s wins in key states after the 2020 election included several of Trump’s own nominees. 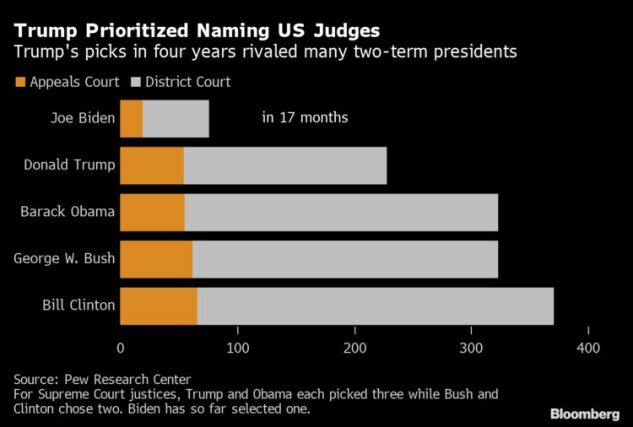 But Trump also made clear that he believed the confirmation of conservative judges was crucial to Republican policy priorities and his own political fortunes. He talked openly about how he expected his nominees would rule in certain ways on hot-button issues like abortion. He referred to “my judges” on the campaign trail and lashed out at judges who ruled against him and his administration; his use of the phrase “Obama judge” earned rare public pushback from Chief Justice in defense of the judiciary’s independence.

US District Judge Aileen Cannon, one of the final judges confirmed under Trump after the election, faced accusations of political bias when she granted his request for a special master in the Mar-a-Lago case.

Cannon also blocked federal investigators from using the seized records until the special master’s work is done. Cannon wasn’t one of Trump’s more controversial nominees, but one of her colleagues previously noted that the former president had filed another politically-charged case in a court location where she was the only judge serving -- though it didn’t end up assigned to her.

Cannon did not respond to a request for comment filed through the court’s press office.

While it appeals Cannon’s ruling, the Justice Department has asked the judge to lift her order with respect to roughly 100 documents with classified markings. The government is arguing Trump has no legal interest as an ex-president, that a special master shouldn’t be allowed to see such sensitive records, and that Cannon’s order will interfere not only with the criminal probe, but also a separate intelligence risk review.

Cannon was one of the 226 of Trump’s judges confirmed to lifetime appointments under Trump, according to the Pew Research Center. The White House and Senate Republicans focused on moving through nominees for the powerful federal appeals courts, flipping the ideological balance of three circuits to have a majority of GOP nominees, including the 11th Circuit.

The 11th Circuit had a reputation as a conservative-leaning court even before that, though, said Miami lawyer Richard Klugh, who handles criminal cases before the circuit and used to lead the appellate division of the south Florida federal defender office. Klugh said that he didn’t think rulings coming out of the court reflected a noticeable shift to the right since Trump’s nominees took office.

“I see it as more of a southern court than a Republican or Democrat court,” Klugh said. “There’s a certain belief in order and civility and peace. It has a great respect for the law and law enforcement.”

David Oscar Markus, another criminal defense lawyer out of Miami who practices before the 11th Circuit, wrote in an email that the “overall ideology” of the court matched the Supreme Court, with a majority of conservative judges and a minority of “moderate” judges.

Luck of the Draw

“But all of them are hard-working, conscientious, and very smart. As with all cases, a lot will depend on what panel the parties draw,” Markus wrote.

Before Trump nominated Judge for the 11th Circuit, she’d been appointed to the Florida Supreme Court by Governor , now a potential presidential candidate for 2024. Trump had considered Lagoa for the Supreme Court vacancy created by the death of the Ruth Bader Ginsberg, a seat eventually filled by Justice Amy Coney Barrett. One of Trump’s proposed candidates to serve as the special master to review the Mar-a-Lago documents is Lagoa’s husband Paul Huck Jr., an attorney in Florida.

The 11th Circuit -- which handles cases out of Alabama, Florida and Georgia -- is one of the newer federal appeals courts. It was split off from the 5th Circuit, which covers other southern states, in 1981. Klugh said that in part because of the heavy criminal docket out of south Florida and the amount of international litigation that comes through the state, the 11th Circuit has experience probing the government’s handling of potentially privileged materials and reliance on filter teams, which are at issue in Trump’s case.

The circuit has taken a “narrower view” of when it has jurisdiction over those types of intermediate legal fights, Klugh said. He expected the judges assigned to the Justice Department’s appeal to question whether they can hear the case at this stage at all.

What exactly the Justice Department will end up asking the circuit to do isn’t clear.

They’ve formally appealed Cannon’s order, but haven’t requested that the circuit immediately intervene to halt the effect. Prosecutors told Cannon that they’d wait until Sept. 15 to see if she’ll grant their request to carve out the classified documents from her order, and if she does, they won’t seek emergency relief from the appeals court. Cannon gave Trump until Sept. 12 to respond.

To contact the reporter on this story:
in Washington at ztillman2@bloomberg.net